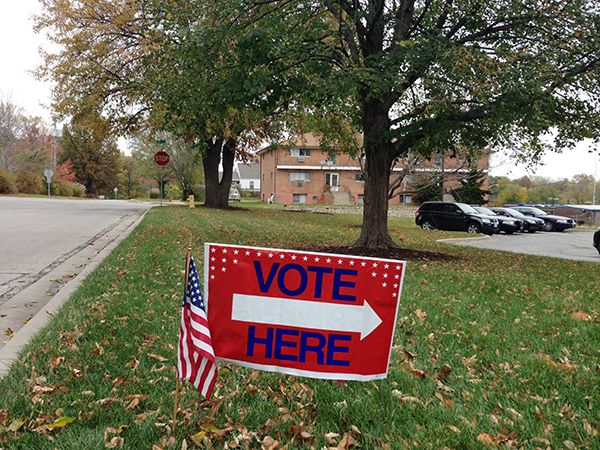 After any pope visits the U.S., pollsters try to measure his impact by tracking Catholic Mass attendance.

That may be the wrong place to look.

Instead, the voting booth may indicate a “Francis effect” — signs Catholics are considering the pope in their political decisions, according to a new survey from Faith in Public Life released Wednesday.

Catholic clout is mighty in a country where 20 percent say they’re Catholic, six in nine U.S. Supreme Court justices are Catholic, and more than half a dozen 2016 presidential candidates claim it as their faith. When the pope goes to Capitol Hill nearly a third of his Congressional audience will be Catholics.

Faith in Public Life and the Institute for Policy Research & Catholic Studies at the Catholic University of America set out to assess how Francis is shaping public policy discussion ahead of his U.S. tour Sept. 22-27.

The survey of Catholic voters found that, while large majorities approve of Francis’ leadership, there were “significant partisan differences.”

Other striking differences were revealed by a close look in three areas — economic inequality, environmental stewardship and the pope’s call for a “new balance” between traditional teachings on abortion, sexuality and marriage, the so-called “non-negotiables,” and an emphasis on care for the poor.

The study of Catholic votes was based on an unusual methodology. A YouGov Internet survey was conducted July 22-31. It asked overall questions of more than 1,400 Catholics, among them 400 respondents from 2016 election battleground states.

In addition, researchers added an experiment. Respondents were divided into two groups and shown different short, mock-up news stories that appeared to be from The Washington Post. Half of the respondents saw stories that made Pope Francis the primary advocate of an idea. The other half saw an alternative message attributed to unnamed “religious leaders” or “climate change experts.”

Weeks before the data was collected, Francis issued his “Laudato Si’” encyclical — a powerful call for environmental stewardship as a moral issue. Half of survey respondents were given a news article about the encyclical to read, while half read a similar call to action from unidentified “climate experts.”

When it comes to persuasion, the pope appears to have more influence on Catholic Republicans than on Democrats (in large part because most Democrats already agree with him).

Catholic Republicans who read about the encyclical were more likely to agree that humans are responsible for climate change (37 percent) than those who received the secular alternative story (27 percent).

The survey asked Catholic voters whether in elections Catholics should pay attention to a range of policy issues or a set of “non-negotiable” issues.

It found that voters with income above $100,000 were overwhelmingly more likely to prefer the pope’s “new balance” message (84 percent) than middle- and lower-income Catholics (78 percent).

Neither income grouping showed much support for the “non-negotiables” message.

“It surprised me that there was so much variation within the U.S. Catholic community,” said University of Louisville political science professor David Buckley, who led the research.

Questions on the economy showed the greatest gaps of all. Respondents were asked a question Buckley called “highly charged,” drawn from Francis’ recent Latin American tour remarks in which the pope criticized capitalism.

People were asked to agree or disagree on whether “unregulated capitalism poses a significant challenge to promoting human life and dignity.”

“It was a serious question but that one that did justice to the pope’s really challenging comments on this issue,” Buckley said.

Among liberal and moderate Catholic voters, 65 percent who read the pope’s message agreed with it, 28 percent were neutral and only 7 percent disagreed.

But agreement plummeted to 25 percent among conservative Catholic voters. Another 27 percent were neutral. And nearly half (48 percent) disagreed.

Conservatives were significantly more likely to accept the message from generic secular experts, the study found.

While the survey was focused on Catholic voters, Pope Francis could have a far wider impact because of his immense popularity among non-Catholics, said experts at a panel discussion Wednesday where the survey data was presented.

Sr. Simone Campbell, the leader of NETWORK who stepped off the activist group’s latest “Nuns on the Bus” lobbying tour to join the panel, said she is astonished by how many non-Catholics tell her, “He’s MY pope.”

In particular, she hears from immigrants and African-Americans about how “nourishing” it is to hear Francis say, “We are all in this together.”

Statistics are important, said Campbell. But the value of the pope’s tour is strongest for “our people who are suffering. … Pope Francis is going to challenge us to bridge the divides and heal our nation.”

His work is cut out for him. The week after he leaves, Congress takes on the federal budget and threats of a government shutdown.