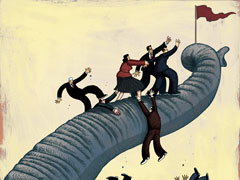 If ever the country needed bed rest and a chance to dose up on Prozac or the antidepressant of your choice, it’s now. Through some 20 televised debates and hundreds of interviews, Republican aspirants to the presidency assaulted the nation’s intelligence, or what was left of it, with displays of venality, egomania, pandering, deception, self-delusion, self-promotion and scripted nonsense -- and that’s just from Newt Gingrich.

America’s capacity for low comedy or high cons may be deep but a point must come when it’s too much. It could have happened around the 19th debate when Gingrich -- pardon, Professor Gingrich -- was running low on ideas to impress voters. After he proposed turning schoolchildren into janitors, he went over the moon by promising -- by the end of his second term as president, no less -- that he would have built a colony on, where else, the moon. That led Ron Paul, in a flash of welcomed wit amid the dross, to suggest we “send some politicians up there.”

The debates epitomized a demented method of electing leaders: politics as theater. Put the hopefuls on a stage, set them to perform as masters of gamesmanship, showmanship and one-ups-manship, and pack the place with an audience hot to howl when fed Republican applause lines: less government, less regulation, less taxes. And less human beings, as when Rick Perry earned raucous cheers with macho talk: “You kill one of our citizens, you will face the ultimate justice in the state of Texas and, that is, you will be executed.”

By the time the Republican road show slogged through Iowa, New Hampshire, South Carolina, Florida and Nevada on the way to Super Tuesday, the original eight had been pared to four. Comedic moments -- from the goofy 9-9-9 economics of pizza king Herman Cain to Mitt Romney, a bishop of the Mormon church turned gambling man by wanting to bet Perry $10,000 pin money that his facts were wrong -- became fewer. There wouldn’t be Jon Huntsman, a billionaire’s son who grew up on Easy Street now posing as a regular guy on Main Street. There wouldn’t be mouthy Michele Bachmann scaring her tea party base that come November the choice could be “between a frugal socialist [Romney] and an out-of-control socialist” president.

Nastiness took over. Gingrich, a longtime specialist in guttersnipe politics adept at smearing his opponents as traitors or saying they should be jailed, attacked Romney for taking money from millionaires while himself welcoming $11 million from a billionaire casino magnate and his wife from Las Vegas, the nation’s capital of family values. Counseled by his staff to strike back, Romney became as much a slasher as Gingrich, creating bad blood between two Republican blue bloods. Trounced by Romney in the Nevada caucus, Gingrich, not getting the message that his message was being rejected, announced that he was in the race to the August convention in Tampa, Fla. He was just warming up, not giving up. He owed it to God and the nation.

Of the final four, only Paul has refused to sully either himself or the process by turning vicious. In the 16th debate, sponsored by FOX News in Myrtle Beach, S.C., a state that gave us Strom Thurmond and the racist Dixiecrats, Paul was the only candidate to oppose the nation’s self-defeating militarism: “We endlessly bomb these countries and then we wonder why they get upset with us.” It’s time “to consider a golden rule in foreign policy. Don’t do to other nations what we don’t want to have them do to us.” For this, the Bible Belt audience of mostly white, middle-aged, conservative evangelicals booed and jeered. If the crowd had contempt for the Golden Rule, it was ecstatic for the Gingrich Rule: With enemies, said Newt, go “kill them.”

A recurring bromide in national politics is that in America, anyone can grow up to be president. To which a sage added, and that’s the problem.