Nuns on the Bus kick off nationwide immigration tour 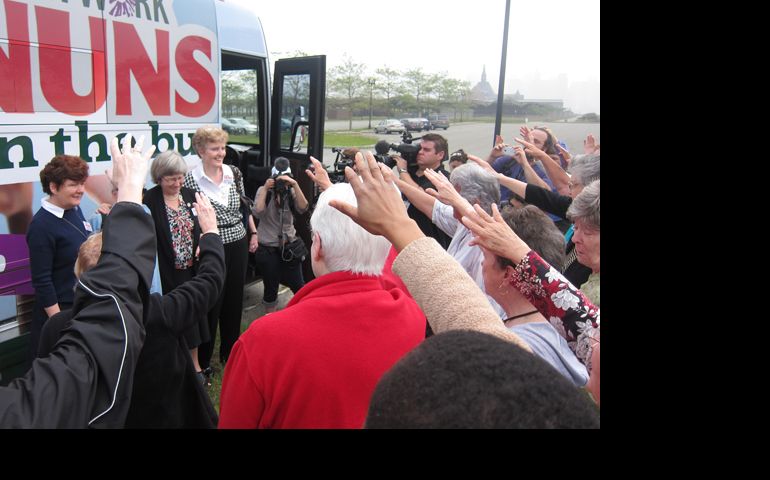 Jersey City, N.J. — With the Statue of Liberty as a backdrop, the Nuns on the Bus on Wednesday kicked off a national tour for immigration reform aimed at giving a faith-based push to legislation that's now hanging in the balance in Congress.

"We have got to make this an urgent message of now," Sr. Simone Campbell, head of the social justice lobby NETWORK, which organized the tour, told a rally on the New Jersey side of the Hudson River.

"The next six to eight weeks is going to determine what we can accomplish," Campbell said as she pointed to nearby Ellis Island, the American gateway for generations of immigrants. "The time is now for immigration reform."

Champions of immigration reform believe they have their best opportunity to pass a comprehensive overhaul since 2007, when an effort backed by President George W. Bush was thwarted by members of his own party. After Republicans lost the Latino vote in November's elections, GOP leaders said they would be open to an immigration bill they think could help change that political dynamic.

A bill with bipartisan support is continuing to make its way through the Senate as backers look to win passage this summer before Congress shifts its focus to budget battles and the 2014 election season next year. But opponents are going all-out to block the bill and said they believe they have a good shot to prevail in the House, where conservative Republicans have more influence.

With so much at stake and so little time, Campbell and NETWORK revved up the Nuns on the Bus in hopes of replicating the media coverage and public appeal of their first tour last summer, when the sisters traveled 2,700 miles through nine states in a wrapped bus to protest Republican budget plans.

That trip made Nuns on the Bus a sensation. Campbell appeared on news shows and "The Colbert Report," and she was a prime-time speaker at the Democratic National Convention.

This time, the bus will travel a total of 6,500 miles over three weeks, stopping in 15 states. Most of them -- like Florida, Texas and California -- have large Latino populations and are on the front line of the debate about creating a path to citizenship for as many as 11 million undocumented immigrants. The tour is set to conclude June 18 on Angel Island in San Francisco.

While the Catholic sisters are the face of the tour -- seven are traveling on this first leg and a total of two dozen will join in at various points -- the current immigration push is uniting religious groups across the political and denominational spectrum.

Many religious communities have long backed justice for immigrants as an example of the biblical injunction to "welcome the stranger."

"God is so happy when God's children stand together for God and for good," as Rabbi Rick Jacobs, president of the Union for Reform Judaism, put it Wednesday at the Nuns on the Bus sendoff. "That's what we do here today.'

But this time around, many white evangelical leaders who are often allied with Republicans have been especially vocal in backing reform, and they can point to polls showing majority support for their views from their fellow believers.

Also notable is that the immigration issue could bring the Catholic sisters and the Catholic bishops together after Campbell's group helped lead the charge for President Barack Obama's health care reforms, which many bishops opposed.

Last spring's announcement that the Vatican was investigating the American sisters on charges that they were too active on social justice issues and insufficiently orthodox on doctrine also soured relations.

But some bishops appear ready to lend support to this Nuns on the Bus tour. Speaking at the rally Wednesday, Msgr. Kevin Sullivan, head of Catholic Charities for the archdiocese of New York, gave a full-throated endorsement of the work of the American sisters and said they have "widespread support" in their campaign for immigration reform.

"In this country, we are a church of immigrants," Sullivan said in a brief interview before the rally. "To be perfectly honest, we have to stand in solidarity with immigrants."

But the Nuns on the Bus can still irk political conservatives in the Catholic church.

As the tour left for stops Thursday in South Jersey and then Washington, Bill Donohue of the Catholic League, which is supported by a number of prominent bishops, put out a statement blasting NETWORK as "a Catholic dissident group" and dismissing Nuns on the Bus for never having more than seven sisters at a time on the coach.

Politics | Nuns on the Bus kick off nationwide immigration tour

Lessons and depression from the primary elections