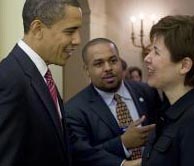 Advisers tapped to help guide the White House's revamped faith-based office say their role is still evolving as the initiative tries to find its footing in the young Obama administration.

Initial members of the council, who were named in February, opened a two-day meeting with White House officials April 6. An additional nine members, who will round out the 25-member council, were also announced April 6.

The overhaul of the office centers on an expanded mission to go beyond matching faith-based groups with government funds, advisory council members said in recent interviews. One of the biggest changes is asking religious leaders to help shape policy on a number of hot-button social issues, including abortion.

While some viewed the Bush administration's efforts mostly as a one-way directive on how to expand the reach of faith-based groups, Obama's unpaid advisers report more of a two-way dialogue on a broader array of issues.

"The sense that you have is that there's really somebody who is listening to what you have to say and will take it into consideration," said one adviser, Bishop Vashti McKenzie, who oversees African Methodist Episcopal congregations in Tennessee and Kentucky. She said the level of communication is "certainly a change from the Republican administration" and also from the Clinton White House.

"There was some give-and-take," McKenzie said, "but not at this level."

The council is charged with helping shape policy in four areas: economic recovery, abortion reduction, interfaith dialogue and responsible fatherhood. McKenzie plans to focus her work on the fatherhood program.

Other advisers said they were given a courtesy heads-up as Obama drafted his executive order permitting federal funding of stem-cell research, or in regard to his nomination of Kansas Gov. Kathleen Sebelius as Health and Human Services secretary. When some members expressed concern about proposed reductions in charitable deductions or rescinding conscience protections for health-care workers, the White House responded with explanations, they said.

Former Southern Baptist Convention President Frank Page, one of the advisers, said he has been surprised at the rapid pace of some policy decisions -- many of which he has not agreed with -- but believes his views were heard when he questioned the plan to rescind conscience protections for health-care workers.

"I felt like there was some listening and some response in that particular issue," he said.

Fr. Larry Snyder, president of Catholic Charities USA and another adviser, said it was helpful when faith-based director Joshua DuBois got on the phone and explained the administration's position on charitable deductions.

"At the same time, we're all thinking, we'll see how it plays out," he said.

Richard Stearns, president of the evangelical relief agency World Vision and a member of the advisory council, said the panel seems to have two roles: serving as "a council of elders" that can offer their expertise to the White House, and also representing their constituents to decision-makers.

"I think there's a broader tent, if you will, in this group," he said. "President Bush's faith-based office, right or wrong, was associated with evangelicals within the faith community. I think this group is broader and is including not just Christians of many stripes but also people of other faiths and people of no faith."

The council includes noted conservatives like Page, and high-profile liberals, like Fred Davie, the openly gay senior adviser for the nonprofit Public/Private Ventures.

"There's always a temptation to just get people on board who agree with you on everything," said the Rev. Jennifer Butler, executive director of Faith in Public Life, a progressive think tank in Washington. "But Obama is sticking to his word that he wants to bring diverse Americans together to talk about even some of the most controversial issues of the day."

One aspect of the Bush office -- partnering faith-based and community groups with federal funds -- remains intact, but advisers stress they're not making the decisions on who is or isn't funded.

Melissa Rogers, director of the Center for Religion and Public Affairs at Wake Forest University's School of Divinity, is an adviser and has written a form letter to respond to the "scores" of people who contacted her thinking she has a role in giving out grants.

Paul Monteiro, who handles religious affairs for the White House Office of Public Liaison, stressed that the advisory council to the office is just that -- advisory.

"I think there's a misconception that this council is calling the shots," he said in a recent talk at Howard University's divinity school, adding, "It's a one-year term because we want to make sure that there are different voices represented."

Daniel Burke contributed to this story.

Why isn't Cory Booker in the lead for the presidential nomination?

Update: Statement on economy denounced by archbishop fails to pass