Are we Easter People? 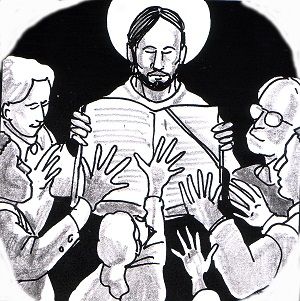 “They went forth and preached everywhere, while the Lord worked with them and confirmed the word through accompanying signs.” (Mark 14:20).

The Feast of St. Mark, Evangelist

It is interesting that for this Feast of the St. Mark the Evangelist, the church uses not his own words but a later addition to his Gospel that changed the ending.  Many scholars agree that Mark’s Gospel ends with verses 1-9 of Chapter 16, the scene where the women discover the empty tomb and encounter a young man who tells them that Jesus has risen and gone ahead of the disciples into Galilee. The terrified women race from the tomb but say “nothing to anyone.”

Why would Mark leave his readers hanging about the eventual Good News of the resurrection? We note that he begins his Gospel with the affirmation that this story is about “Jesus Christ, the Son of God,” so he has no doubts about the end of the story and Jesus’ triumphant resurrection.

Mark is also thought to be the earliest Gospel, written some 20 years before Matthew and Luke and 40 to 50 years before John, which all add more details and theological interpretation to Mark’s simpler narrative.  The more complete addition to his original text summarizes the appearance stories that are part of the growing resurrection tradition and finishes with the Apostolic Commissioning by Jesus that makes up today’s Gospel.

Yet, Mark’s Gospel is no less sophisticated than the other evangelists, and some scholars contend that his sudden ending was deliberate — his way of presenting the challenge of Easter faith directly to his readers. He makes them – and us – into startled witnesses to the empty tomb and the message that Jesus is alive and going into the world before us.

The question becomes, do we believe this? And if we do, what implications does this have for our faith lives? Isn’t Mark telling us not to demand proof or enshrine Jesus’ point of departure in Jerusalem but to focus our faith response on his disappearance into the world where we will find him, especially among the poor, the oppressed and the crucified of history?

Go and share in his redemptive work of healing and reconciling, seeking justice and making peace. This is how we will know that he is alive, risen from the dead, the source of life to anyone who believes in him.  Only when we commit to the revelation that love does indeed overcome death are we are able to then cross the threshold of faith to celebrate him as “Jesus Christ, the Son of God.”

Column | Are we Easter People?