Pope’s address to bishops may have been his most important 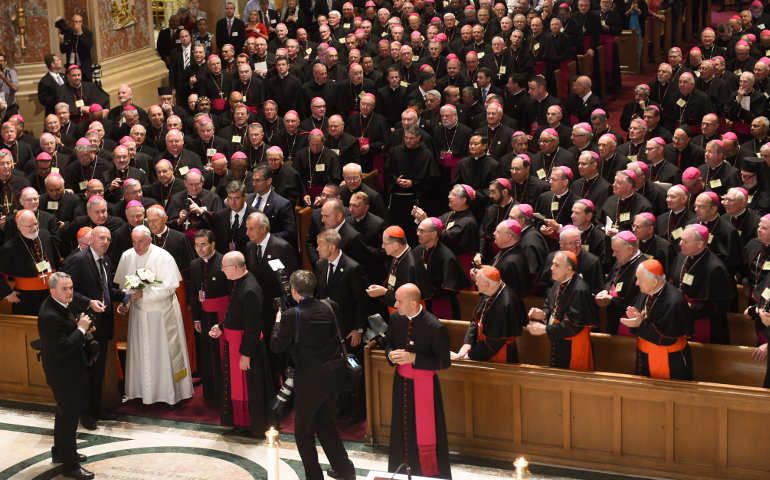 Pope Francis arrives to the Cathedral of St. Matthew the Apostle for a meeting with U.S. bishops Sept. 23 in Washington. (CNS/Jonathan Newton, pool)
This article appears in the Francis in the United States feature series. View the full series.

Editor's note: This is the first of a two-part series. Click here for Part 2.

For an hour or so the first full day of his U.S. visit, Pope Francis was immersed in a setting quite different from the raucous scenes of adoring throngs lining the streets, the crush of thousands at an official White House greeting and thousands more gathered for the liturgy during which Fr. Junipero Serra was canonized. The pope had a relatively quiet hour at midday prayer Wednesday with his brother bishops at the Cathedral of St. Matthew the Apostle.

His talk here, which registered as a few highlight points in most of the immediate coverage, may have the deepest and most enduring consequence for the Catholic community. His speech before Congress, for instance, will be mined and dissected in the way expected in a pluralistic democracy. There is far less room for parsing the words of the Bishop of Rome speaking to brother bishops.

In five intense paragraphs mid-homily, Francis laid out an insistent call for dialogue – with everyone and in all directions – and explained what he considered the requirements for “authentic dialogue.” He also rejected “harsh and divisive language” which may temporarily satisfy but does not persuade in the long run. Though Francis did not state it as such, his “reflections” on the matter were the clearest repudiation to date of the style of some U.S. bishops who have become characterized as “culture warriors,” loudly condemning the culture and often its leaders and others who voice disagreement with or challenge church positions.

The pope’s instruction, said Bishop David Zubik of Pittsburgh, either “has to confirm a style a person already has or has to judge those whose style isn’t that.” The point, he said, is that “you don’t get very far building walls. It never happens that way. People first have to be able to listen to each other,” he said. “You don’t accomplish anything with a stalemate.”

Zubik, who was in the cathedral with the pope declare himself “thrilled by the direction he is calling us to.” The appeal to dialogue applied to the bishops themselves as well as the wider culture, he said. “We have to continue to talk about how we become partners together” to “serve the faith and the country.”

About 300 bishops were assembled for the service in the Romanesque style cathedral on Rhode Island Avenue. As the bishops filled the front and center rows, dressed in “house cassocks,” with magenta, watered-silk sashes around their waists and wearing the same color zucchettos, or skull caps, the image was unmistakable of a very exclusive, men-only organization. The point was underscored by two women interviewed by NCR. Both are enthusiastic about Francis and his various initiatives while at the same time critical of the fact that despite this pope’s frequent references to inclusiveness, this meeting of church leadership was a conversation among men only.

Francis began by lavishing gratitude on the church of the United States and its leaders. Only two lines of the talk inspired spontaneous applause. The first in which he voiced his support, speaking of himself in the third person: “He puts his hand on your own, a hand wrinkled with age, but by God’s grace still able to support and encourage.”

The second came a paragraph later when he said he was “conscious of the courage with which you have faced difficult moments in the recent history of the church in this country without fear of self-criticism and at the cost of mortification and great sacrifice.” He ended that segment by saying he understood “how much of the pain of recent years has weighed upon you and I have supported your generous commitment to bring healing to victims – in the knowledge that in healing we too are healed – and to work to ensure that such crimes will never be repeated.”

The reaction was immediate. Victims and their support groups are clear that they consider the bishops just about anything but courageous in their handling of abuse. And the question remains for many whether the bishops – whose steps to remedying the situation came only after public opinion and legal intervention forced their hand – were applauding themselves for their courage or the pope’s assertion that “such crimes will never be repeated.”

An attentive quiet accompanied the rest of the speech, delivered in Italian and simultaneously interpreted for attendees, who included some parishioners and other invited guests.  Francis told bishops it was “not my intention to offer a plan or to devise a strategy,” and he said he did not “come to judge you or to lecture you. He was, instead, offering “some reflections which I consider helpful for our mission.”

Some of the reflections, however, left no questions about what he wanted his bishops to do and how he wanted them to act – toward one another, their priests, the faithful and the wider culture.

“The speech was diplomatic in tone but very Pope Francis in substance,” said Massimo Faggioli, director of the Institute for Catholicism and Citizenship at the University of St. Thomas in St. Paul, Minn. It was “very carefully packaged not to sound too judgmental.”

The temptation in these challenging times, Francis said, is “to give in to fear, to lick one’s wounds to think back on bygone times and to devise harsh responses to fierce opposition.

“And yet we are promotors of the culture of encounter.”

In Francis’s vision, encounter occurs through dialogue, which he describes as “our method, not as a shrewd strategy but out of fidelity to the One who never wearies of visiting the market place, even at the eleventh hour, to propose his offer of love.”

The dialogue should be with everyone – among bishops, in their presbyterates, with lay persons, families and with society. “I cannot ever tire of encouraging you to dialogue fearlessly,” he said.

Faggioli was especially struck by Francis’s insistence on dialogue. In the years before Francis’s election in 2013, he said, “the word dialogue had become a bad word, a signal of becoming a liberal.” The insistence on dialogue he thinks is especially on the pope’s mind because of the upcoming Synod on the Family in Rome next month and the possibility of very contentious debate. “This church has to learn to dialogue again,” he said. “It is the only way out of this difficult moment.” The same is true in the secular world, he said. “ There’s no alternative to dialogue. The alternative is to circle the wagons and wait for the end of the world.”

Gina Messina-Dysert is “thrilled with Pope Francis and all that he is bringing not only to the Catholic community but to the general community” but she also wishes that among the invitees to the dialogue were women and that among the subjects were those also of interest to women.

A feminist theologian and dean of graduate and professional studies at Ursuline College, she said she “would  like to see women welcomed in to the conversation. Women are not individuals to be feared.”

The co-author of the recently released Faithfully Feminist: Jewish, Christian and Muslim Feminists and Why We Stay, said the pope’s focus on social justice and poverty is “so wonderful,” but she wishes the church would get around to recognizing that poverty “is deeply intertwined with gender-based violence” and that the violence, in turn, is abetted by traditional church views on women and restrictions on reproductive rights.

The same tension — loving what she heard, disappointed in what was missing — was apparent to Marti Jewell, associate professor in the school of ministry at the University of Dallas. On one hand, she said, Francis was very affirming to the bishops even during the tough parts of the talk. “On the other hand, he was pure Francis. He has almost a dystopian view of life – he sees the pain and suffering of this life – but he really believes that Jesus and the gospel has something to bring to it. I heard the Beatitudes,” she said, “I heard the corporal works of mercy.”

What she didn’t hear were any women, references to women or discussions of issues important to women. While she was heartened to hear him speak as a bishop in plain language to his fellow bishops, she also recognizes that "he is a bishop speaking to bishops.”

Still, Jewell expresses a tolerance because of all the other things he is doing, his advocacy for immigrants and his emphasis on mercy and dialogue. “I think he is doing fabulous things for migrants, the climate, for cleaning up Rome. I’m not going to ask him to do everything.

“Would I have liked to see more invitations to women? Of course. I’d like to see much more support of lay ministry, the one place women can now be involved. But I don’t think he can do everything.”

What's next in the contraceptive mandate case?