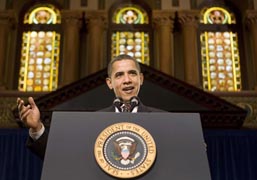 President Obama has a Catholic problem. The vituperative attacks on him over his decision to deliver the commencement address at the University of Notre Dame are evidence of a deeper disquiet because they have not been restricted to the radical pro-life fringe. Nine American bishops have publicly voiced their opposition to his going to Notre Dame. This kerfuffle was largely avoidable but the White House has seemed tone deaf to Catholic concerns since January 20.

Three days after the Inauguration, President Obama revoked the Mexico City policy that prevented government funding of overseas family planning groups if they provide information on procuring an abortion. This was expected but, the White House did not send out emissaries to argue that the change was mostly about family planning services, and that it is precisely the absence of such services that has resulted in the high abortion rates in many developing countries, including Catholic countries.

The decision to overturn the “conscience regulations” for Catholic health care workers was also mishandled. The Obama administration said that the regulations, which the Bush administration enacted in its final months in office, were overbroad and vague. Conservatives claimed that without the regulations Catholics would be coerced into performing abortions, something that is actually prohibited by federal law already.

No one at the White House, however, argued that they intended to draw new regulations that were not vague, still less that coercion of conscience is a significant issue. In Connecticut two years ago, after a very nasty brawl, the legislature ordered Catholic hospitals to provide emergency contraception that might function as an abortifacient. A tentative compromise was worked out eventually, but it would be wrong to dismiss Catholic concerns as alarmist. And, on liberal grounds, the coercion of conscience is suspect.

Finally, when the President announced he was permitting federal funding for embryonic stem cell research (ESCR), he endorsed a policy most Americans and most Catholics support. But, his spokespeople seemed to go out of their way to say things offensive to Catholics. “This [decision] is consistent with the president’s determination to use sound scientific practice, responsible practice of science and evidence, instead of dogma in developing federal policy,” said Obama’s science advisor Harold Varmus. Scientism, too, has its dogmas and besides Catholics do not consider dogma a bad thing.

The President did much better himself when asked about ESCR at his last press conference: He did not dismiss the ethical issues involved and acknowledged their difficulty, even holding out hope that someday this ethically challenged research might be avoided. Common political sense suggests it would have been wise to have Sen. John McCain, who also supported ESCR, standing over Obama’s shoulder at the signing ceremony.

Had the Obama administration rolled out these three policies with greater care, the controversy about Notre Dame would not have become so explosive. Extremists like Randall Terry, the founder of Operation Rescue, would have made a fuss no matter what and there are some conservative Catholics who are as devoted to the GOP as they are to the Blessed Virgin. But, if the President had called several key members of the hierarchy to discuss these policy changes, the controversy over his Notre Dame invite might have been avoided.

President Obama also might have learned earlier that his administration was developing a problem with Catholics if his administration had a sharper ear for Catholic concerns. No bishop was going to endorse ESCR but it might not have become a casus belli if the President said early on that he was committed to continuing research using adult stem cells in the hope that they might allow us to avoid the ethical issues raised with embryonic stem cells.

If he had coupled his rejection of Bush’s “conscience clause” with the naming of a panel to craft another that included an American cardinal, he could have defused the criticism he has received since.

Instead, Catholics who voted for Bush in 2004 but for Obama in 2008, in large part because he spoke differently about life issues from the way previous liberal Democrats addressed life issues, are beginning to worry that they were had. They knew he was pro-choice, but they believed him when he said he was not pro-abortion. The tone-deafness of the administration, however, plays into the conservative criticism that this is a distinction without a difference. Seeing as the Catholic vote was decisive in states like Ohio, Indiana, Nevada, and Colorado, the White House might want to recalibrate their approach.

The Bush administration paid very close attention to Catholics. In 2001, the first time the newly inaugurated President left the White House was to attend a dinner hosted by the Catholic archbishop of Washington. Deal Hudson, the editor of Crisis magazine, served as a go-between for the Bush administration, conservative Catholic organizations and some members of the hierarchy. Hudson was a controversial figure, but he could smell trouble for the administration on Catholic issues and help them avoid it. Bush increased his share of the Catholic vote significantly from 2000 to 2004.

So far, no one has been named to serve as the Obama White House’s liaison to the Catholic community yet. Nor is it clear that the administration understands the need to fill the liaison job with someone who can do more than preach to the liberal Catholic choir. A political liaison must keep the choir singing, assuredly: Some people come for the music. But, the White House needs a liaison who knows how to reach beyond the choir, especially to two key groups: the hierarchy and those Catholic swing voters who flipped in 2008.

Public spats with men of the cloth earn you the worst kind of press and the Catholic hierarchy has its own newspapers, radio programs, etc. As for Catholic swing voters, they will be as critical in the 2010 midterms as they were in 2008, concentrated as they are in swing states.

The administration also has not yet named an ambassador to the Vatican. This job is too important to go to a big-time fundraiser with no credentials for the work. The Vatican is much more enthusiastic about Obama than some of the more vocal, conservative American bishops. Placing someone with ecclesiastical savvy at the Vatican embassy would provide the administration with another avenue of communication.

Both Duquesne law professor Nick Cafardi or Pepperdine law professor Doug Kmiec have many, varied and deep relationships within the Catholic Church and could not only promote good will in Rome but could serve as a sounding board for Catholic concerns as well.

Catholic swing voters are not doctrinaire about abortion or ESCR, but life issues do concern them and when they hear a presidential advisor denigrate “dogma” they roll their eyes. And, when their local bishop denounces the President, they listen. The President needs to pick his fights judiciously and fighting with the Catholic hierarchy is one fight he should avoid.

During the campaign, Catholics felt that Mr. Obama understood their concerns. He listened to our heroes like Sen. Bob Casey and grasped the symbolism of providing Casey a primetime speaking slot at the Democratic National Convention, a slot denied his pro-life father in 1992.

Obama spoke passionately about the need to reduce the abortion rate. He spoke about “the dignity of work,” a phrase frequently used by Pope John Paul II in his writings on social justice. But, in his first two months, it is not clear the President’s staff understands Catholics the way their chief does. They had better hurry up. Obama may or may not be able to turn the economy around by the midterms next year. The last thing he needs is to unnecessarily alienate Catholic swing voters.

Is the idea of a global government agency radical?

Where do the candidates stand after their conventions?

Your thoughts on presidential apologists