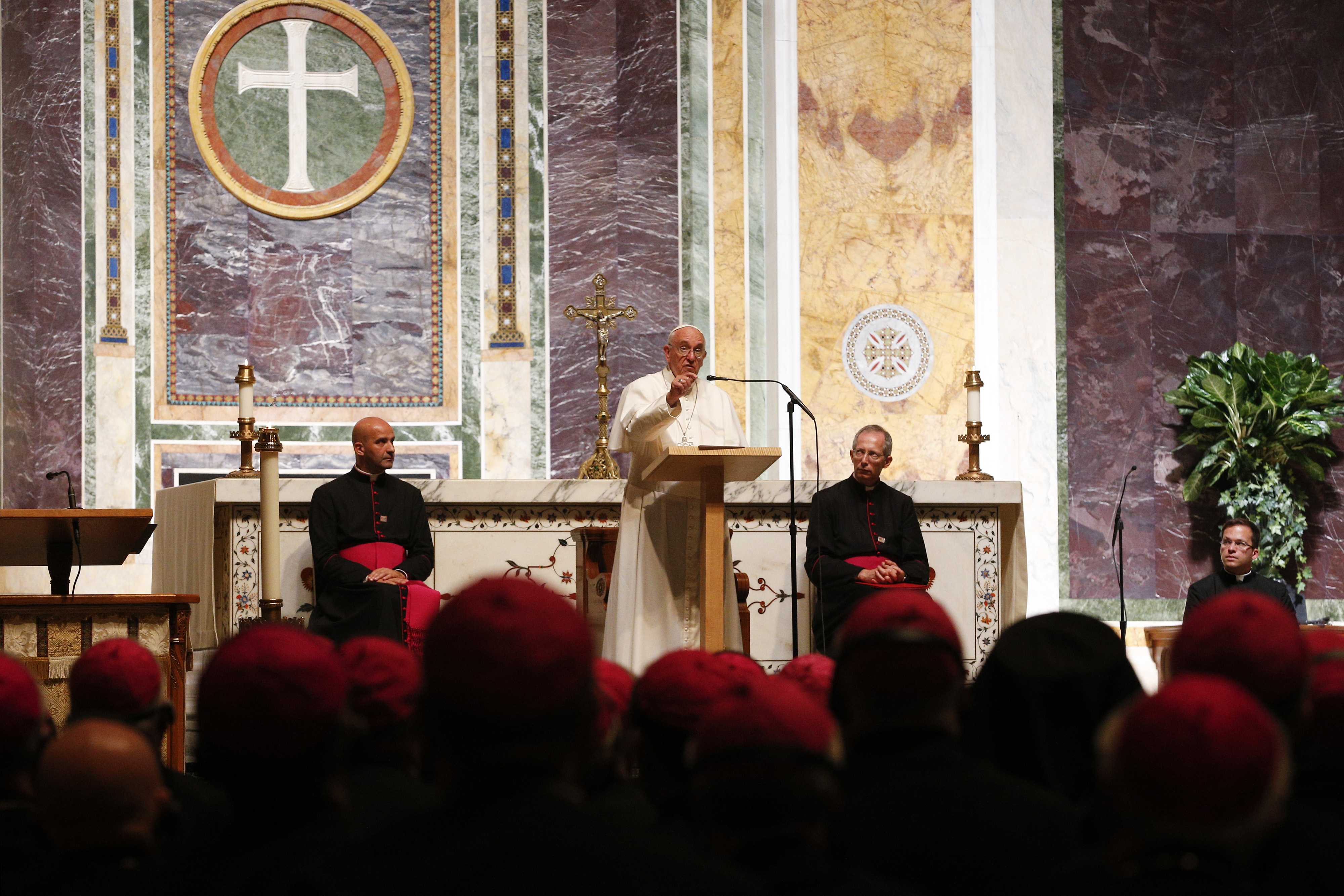 Pope Francis addresses U.S. bishops during a meeting at the Cathedral of St. Matthew the Apostle in Washington Sept. 23. (CNS/Paul Haring)

Editor's note: This is the second of a two-part series. Click here for Part 1.

One of Pope Francis’s most recent episcopal appointments in the United States thinks the model of church the pope was proposing in his talk to bishops on Wednesday is one that seeks engagement with and transformation of culture rather than rigidly standing against it or apart from it.

Bishop Robert McElroy, who was installed in April to head the San Diego diocese, said the pope’s discussion of power and authority spoke to his own experience, which included years as both a pastor of a parish and in numerous diocesan administrative positions.

At one point in his talk, Francis said, “It is helpful for a bishop to have the farsightedness of a leader and the shrewdness of an administrator, but we fall into hopeless decline whenever we confuse the power of strength with the strength of that powerlessness with which God has redeemed us.” The “price of lasting victory,” he added, “is allowing ourselves to be wounded and consumed.”

They were lines that “struck home to me,” said McElroy, who viewed the speech on television because he was meeting for several days with his priests, an event that was planned well in advance of the papal trip and could not be rescheduled.

McElroy was pastor of a parish for 15 years before being named an auxiliary bishop and was also involved in an array of administrative posts over that period. “When I would fall into that role of being that administrator, I would find myself isolating myself from the affective dimension of the decisions I was making.”

He termed the temptation to “become a bureaucrat” a “great danger in his life.” In those moments, he said, he tended to “insulate myself from the very hard human realities” of those who approached him.

The lines of Francis about power and powerlessness “touches upon the same thing” for a bishop who has vast authority within his diocese, said McElroy. “The temptation is to resort to the authority of that office as strength first, rather than understanding that the real authority of that office lies in its capacity to offer conversion within the church as well as the wider society. It is a strength that comes from evangelical effort to convert minds and hearts and souls.”

Some bishops in the United States in recent years have issued excommunications and threatened to ban politicians from Communion. In a widely reported concerted effort, many objected to the University of Notre Dame’s invitation to President Barack Obama to address commencement exercises. At another point, one bishop compared the president to Hitler and Stalin.

Francis expressly called for an end to “harsh and divisive language.” He said such language “does not befit the tongue of a pastor; it has no place in his heart. Although it may momentarily seem to win the day, only the enduring allure of goodness and love remains truly convincing.”

The path instead, he said, should be dialogue, not as a matter of strategy but in imitation of Christ.

The dialogue should occur with humility and with a certain sense of abandonment. “Do not be afraid to set out on that ‘exodus’ which is necessary for all authentic dialogue,” said the pope. “Otherwise, we fail to understand the thinking of others, or to realize deep down that the brother or sister we wish to reach and redeem, with the power and the closeness of love, counts more than their positions, distant as they may be from what we hold as true and certain.”

McElroy asked, “How do we approach the fact that we live in a culture in which so much of what the church stands for isn’t accepted and is attacked? The great temptation is to fight that in the ways of the world. When somebody attacks us, the natural reaction is to strike back.”

For the church, however, “that is not our way. Our way is encounter,” he said.

The discussion put him in mind of H. Richard Niebuhr and the famous Christian theologian’s work Christ and Culture, which outlines several models that explore Christ as against culture, in culture, above culture, or in tension with it.

“One he proposes is Christ transforming culture, in which case you have to embrace the culture in order to transform it,” McElroy said. In that scheme, he said, culture is seen as “a spiritual enterprise … we have to love it with the transforming power of the Gospel. I think this is the one Francis is proposing.”

Related: Pope’s address to bishops may have been his most important

Francis also shed light on the nature of unity among the bishops when he said, “The great mission which the Lord gives us is one which we carry out in communion, collegially. The world is already so torn and divided, brokenness is now everywhere. Consequently, the church, ‘the seamless garment of the Lord,’ cannot allow herself to be rent, broken or fought over.”

The bishops’ primary mission, said Francis, is “to solidify unity, a unity whose content is defined by the Word of God and the one Bread of Heaven.”

A danger, said McElroy, is that “sometimes unity among the bishops is seen as uniformity at all costs. I don’t think that is the unity he is suggesting.”

Bishops, McElroy said, do not have to adopt “the same exact approach to everything” as a requirement of unity. “The communion we have with one another as we bishops attempt to deal with doctrinal and pastoral issues is the common Gospel among us and the effort bishops make in trying to bring the Gospel pastorally” to the people they serve.

McElroy also found interesting “how the pope presented the central issues of Catholic social teaching.” In one sentence, Francis listed the range of issues of urgent concern to the church: “The innocent victim of abortion, children who die of hunger or from bombings, immigrants who drown in the search for a better tomorrow, the elderly or the sick who are considered a burden, the victims of terrorism, wars, violence and drug trafficking, the environment devastated by man’s predatory relationship with nature – at stake in all of this is the gift of God, of which we are noble stewards but not masters.”

“I believe what he is telling us,” said McElroy, “is that our notion of the life issues has been impoverished and too truncated. What we’ve done is place them in two hermetically sealed boxes,” one labeled dignity issues and the other life issues.

“He’s saying all of them are life issues,” said McElroy, that economic matters and poverty and the environment are all life issues as well as dignity issues.