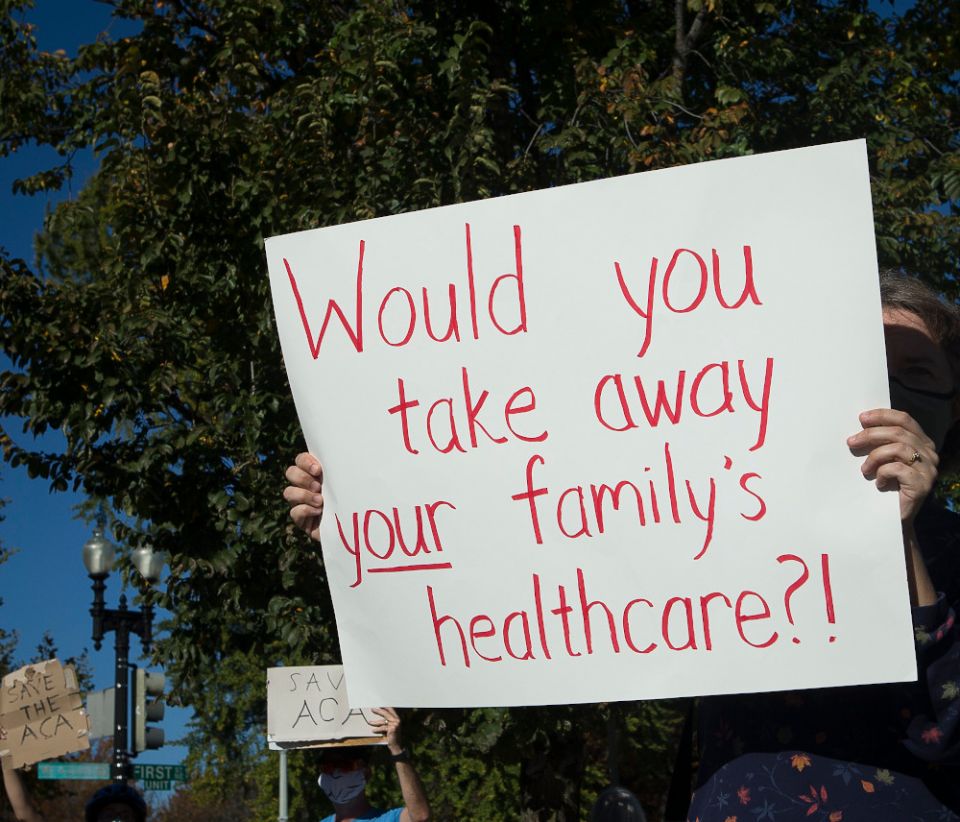 People show support for the Affordable Care Act in a demonstration outside the U.S. Supreme Court in Washington Nov. 10, 2020. (CNS photo/Tyler Orsburn)

Washington — On Nov. 10, when the fate of the Affordable Care Act faced the Supreme Court for the third time since it was signed into law 10 years ago, the justices seemed willing to leave the bulk of the law intact even if they found one part of it to be unconstitutional.

The possible way forward during the two-hour oral arguments by teleconference was set by Chief Justice John Roberts and Justice Brett Kavanaugh.

The two justices repeatedly stressed that they didn't see how it was necessary to strike down the entire health care law even if its individual mandate, requiring each person to buy health insurance, was invalidated.

Roberts stressed that the move by Congress three years ago to drop the penalty for not buying health insurance did not indicate its intent to do away with the entire health care legislation.

"I think it's hard for you to argue Congress intended the entire act to fall if the mandate was struck down if the same Congress that lowered the tax penalty to zero did not even try to repeal the rest of the act," he said. Roberts also pointed out that Congress did not try to kill the entire law when it eliminated the tax penalty. "They wanted the court to do that, but that's not our job."

The case before the court, California v. Texas, was three pronged. It examined whether the challengers — 18 Republican states and two individuals — even had the legal standing to bring this case forward. The justices also had to determine if changes made to the health care law by Congress in 2017 made the individual mandate unconstitutional, and if so, if that part of the law could be separated out or if the entire ACA would need to be struck down.

The ACA, which became law in 2010 and was fully implemented in 2015, survived its battles with high court twice before, in 2012 and 2015. This year's challenge to the law also was backed by President Donald Trump's administration. The president has frequently said he hopes the court would throw out Obamacare in its entirety.

The stakes were high in this year's arguments. Outside the court on the warm November morning, protesters held signs urging the court to keep the ACA. The fear the law might be struck down, amid a pandemic, intensified during the confirmation hearings for Justice Amy Coney Barrett when Democratic senators raised suspicion that she could potentially vote to strike it down.

The legislation's repeat visit to the Supreme Court had Justice Samuel Alito quoting the Yogi Berra phrase: "It seems like deja vu all over again."

But he also said a sea change had occurred since prior arguments before the court due to Congress' action on the individual insurance requirement.

Striking down the law would leave 20 million Americans uninsured, according to estimates from the Urban Institute.

The biggest loss would be for low-income adults eligible for Medicaid under the law after most states expanded the program to include them. Millions of other Americans would lose the private insurance plans they enrolled in via the ACA marketplaces, including young adults who had been eligible to stay on their parents' plans until they turned 26.

Another loss would be the health care law's protections of preexisting conditions. Trump has said he would preserve that protection if the law was struck down, but he never offered any details on how that would happen.

The day before the case was argued before the court, Notre Dame Law School professor Richard Garnett, director of the school's Program on Church, State and Society, said it was unlikely the court would call the ACA unconstitutional.

He also said there was "very little chance that a majority of the justices will conclude" Congress' move to take away the penalty for individuals who did not buy insurance would undo the entire health care legislation.

In a Sept. 9 statement, Mercy Sr. Mary Haddad, the organization's president and CEO, urged the court to uphold the current law, saying that striking it down would be devastating to millions of Americans, including those with COVID-19.

"The pain of repeal would be borne by some of the most vulnerable in our society — pregnant women, racial minorities, and low-income individuals and families," she added.

She said if the court were to strike down the entire ACA, "it would wreak havoc on the U.S. health care system and irreparably harm those most in need of care" in the middle of a pandemic.

Haddad also emphasized that a ruling on one part of the law should not impact the law as a whole.

A decision on this case will be issued next year.

The Supreme Court gets it wrong