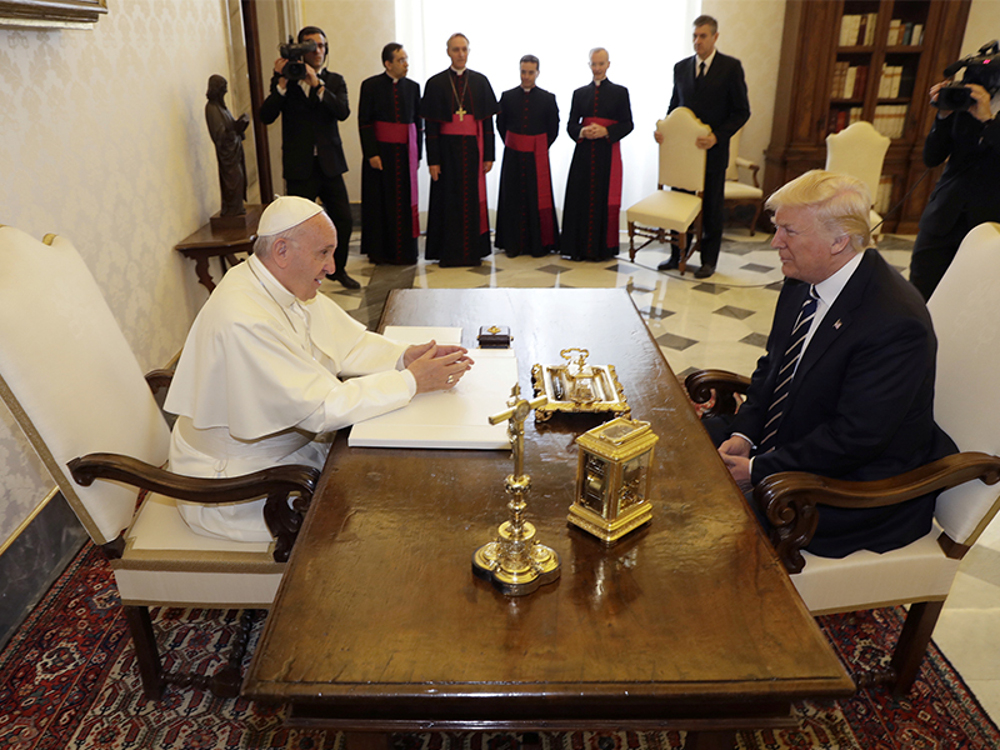 Pope Francis meets President Donald Trump during a private audience at the Vatican on May 24. (Photo courtesy of Reuters/Evan Vucci/Pool)

President Donald Trump's evangelical Christian advisers are requesting a meeting with Pope Francis after a Vatican-approved magazine published a piece condemning the way some American evangelicals and Roman Catholics mix religion and politics.

That request came in an Aug. 3 letter to the pontiff from Johnnie Moore, an evangelical author, activist and public relations consultant. Moore asked Francis for a meeting of Catholic and evangelical leaders — and quickly.

"It’s in this moment of ongoing persecution, political division and global conflict that we have also witnessed efforts to divide Catholics and Evangelicals," Moore wrote.

"We think it would be of great benefit to sit together and to discuss these things. Then, when we disagree we can do it within the context of friendship. Though, I’m sure we will find once again that we agree far more than we disagree, and we can work together with diligence on those areas of agreement."

Moore told RNS he was writing on behalf of evangelicals informally advising the Trump administration. He was a member of Trump's evangelical advisory board during the 2016 presidential campaign and is one of several dozen prominent conservative evangelicals who have attended meetings organized by White House staff, prayed for the president in the Oval Office and voiced support for some of his policies.

Moore said he reached out to the pope because of his reputation as a "bridge builder" and assumes Francis would be willing to build bridges to those who disagree with the piece published in La Civiltà Cattolica in July. The article was authored by Fr. Antonio Spadaro, an adviser to Francis, and the Rev. Marcelo Figueroa, a Presbyterian pastor.

Evangelicals and Catholics have united on a number of issues, including opposition to abortion and support for religious liberty, Moore wrote. He expressed hope that evangelical leaders could meet with Vatican officials to discuss other "matters of great concern to us all, especially as it relates to refugees, the poor and the persecuted."

La Civiltà Cattolica's article had called out Trump's conservative religious supporters for promoting what Spadaro and Figueroa called a “xenophobic and Islamophobic vision that wants walls and purifying deportations.”

Pope Francis himself has made pointed remarks about Trump, saying during the campaign that a man who thinks about building walls instead of bridges is “not Christian.” The two world leaders since have had a "cordial" meeting at the Vatican.