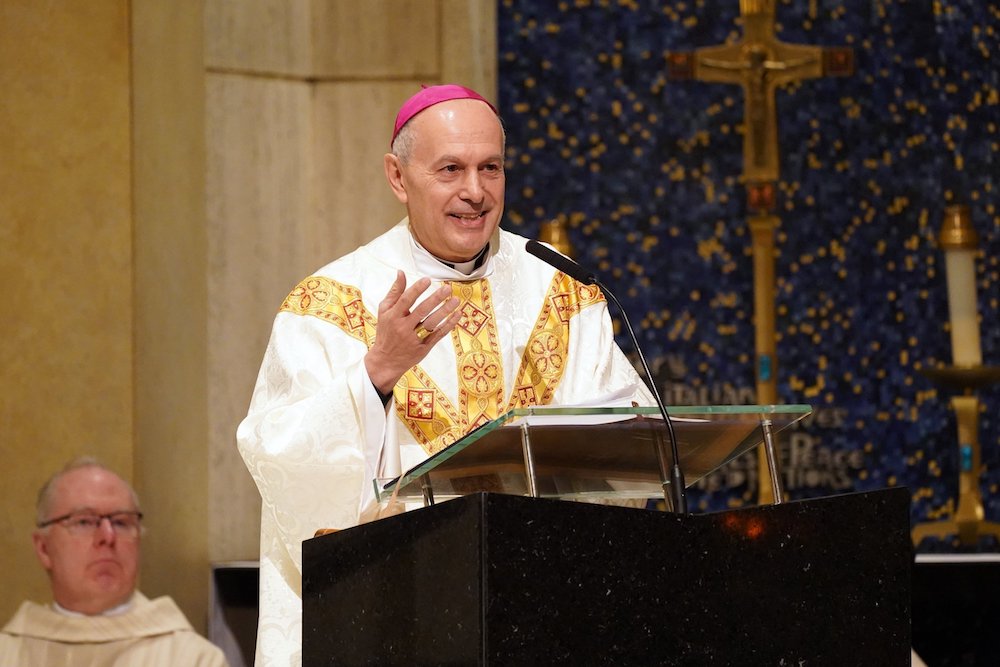 The world's leaders "cannot allow" themselves to be "spectators to violence and war, to brothers killing brothers, as if we were watching games from a safe distance," Archbishop Gabriele Caccia told a U.N. committee session discussing nuclear weapons and other weapons of mass destruction Oct. 13.

"The lives of peoples are not playthings. We cannot be indifferent onlookers," the Vatican's permanent observer to the United Nations added.

The archbishop, quoting Pope Francis' encyclical "Fratelli Tutti, on Fraternity and Social Friendship," also stressed that world leaders should never forget the people who "who have suffered the effects of atomic radiation or chemical attacks."

He also reiterated the pope's assessment about the immorality not only of using, but also of possessing nuclear weapons, "since the intrinsic intentionality of having nuclear weapons is the threat to use them."

It is time for nuclear weapon stockpiles to "be definitively capped," he emphasized.

"Our world is so interconnected that all nuclear weapons, wherever they may be, must be eliminated in the shortest feasible time, lest accident or miscalculation lead to catastrophic humanitarian and environmental consequences," he said.

And quoting Francis, he added that the "use of atomic energy for purposes of war is immoral, just as the possessing of nuclear weapons is immoral."

The archbishop noted that many countries have made progress toward nuclear deterrence and should make similar efforts with conventional weapons, including the growing threat of the use of armed drones and lethal autonomous weapons systems.

Caccia said the international community should reduce the reliance on conventional weapons to resolve disputes out of concern for those who could be harmed.

Again referring to the pope's encyclical, he said world leaders should not "remain mired in theoretical discussions," but must consider the humanity of victims.

"Let us look once more at all those civilians whose killing was considered 'collateral damage.' Let us ask the victims themselves. Let us think of the refugees and displaced, those who suffered the effects of atomic radiation or chemical attacks," the archbishop said, quoting Francis.

Addressing recent reports of the use of nerve agents in various places in the world, he stressed that more than a century after chemical weapons were used in World War I, countries around the world should no longer have these weapons and at the very least should be pursing steps to get rid of them.

He also stressed the need to not lose sight of the threat of "dirty bombs" or radiological weapons and the need for measures to prohibit the use of radiological materials as weapons.

In his final remarks, he emphasized that "the Holy See wishes to state its conviction that outer space should remain the peaceful domain that it has been thus far in human history. While certain military uses of that environment have been deployed, such as communications, navigation and monitoring, these are also critical for peaceful purposes."

He said that to weaponize space, "either by deploying weapons, or by attacking space objects from the ground, would be extremely dangerous" and urged the negotiation of measures "so that the outer space environment remains safe for all of us."

In another session that day, dedicated to global partnerships and groups of countries in special situations, Caccia spoke of the need to help other countries recover from the COVID-19 pandemic and "progress on the path of development."

He noted that for some developing countries, the number of those living in poverty, suffering from food insecurity and going without education has increased because of the pandemic.

He urged the international community to help these countries develop affordable, reliable and resilient emergency, transportation and communications infrastructure.

The archbishop also noted the needs of island countries for help — and the urgency of listening to their appeal — in protecting their environment and ecosystems from the effects of climate change.