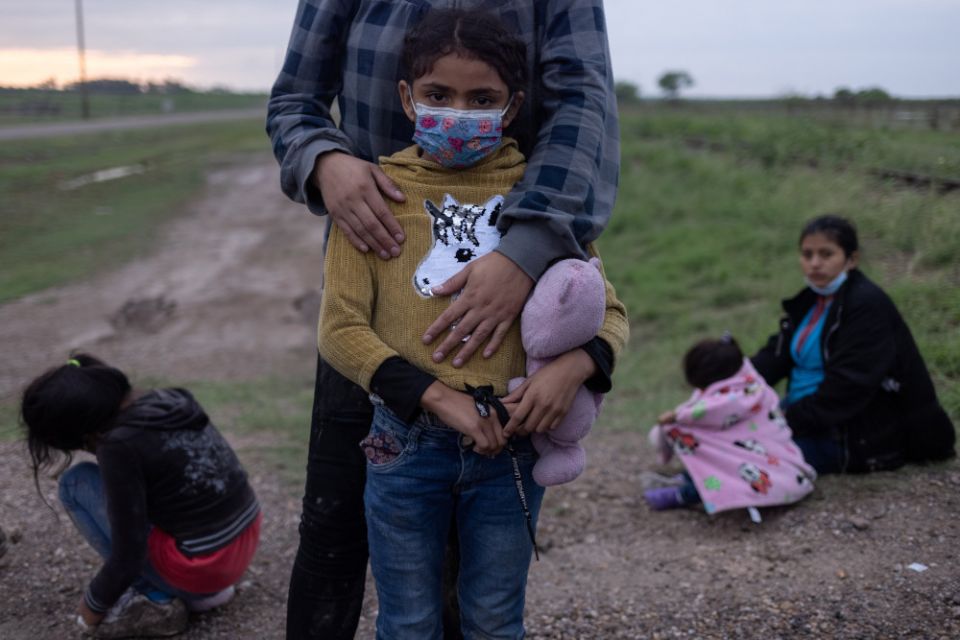 A migrant family from Honduras seeking asylum in the U.S. waits to be transported to a Border Patrol processing facility after crossing the Rio Grande into La Joya, Texas, May 13, 2021. (CNS photo/Reuters/Adrees Latif)

San Salvador, El Salvador — The U.S. Conference of Catholic Bishops will host an emergency meeting with prelates from Central America as well as Vatican representatives June 1 and 2 in Chicago to set forth a path for the U.S. church's response to immigration.

The meeting comes as parts of Latin America have been hard hit economically by the COVID-19 pandemic, changing climate patterns and emerging political strife.

The meeting will include representatives from the Vatican's Migrants and Refugees Section, bishops from Central America and Mexico, as well as U.S. Cardinals Blase J. Cupich of Chicago and Joseph W. Tobin of Newark, New Jersey, and U.S. Bishop Mark J. Seitz of El Paso, Texas, and Auxiliary Bishop Mario E. Dorsonville of Washington, among others.

"We're hoping to draw attention to the fact that this is an issue for the entire church," said Seitz in a May 26 phone interview with Catholic News Service.

Dioceses around the country ideally should be thinking about their response to migrants, finding ways to be supportive of those who turn up in their midst because responding to the vulnerable is part of what the Gospel calls Christians to do, said Seitz.

"I think the church needs to have a clear teaching and moral voice (on immigration), just as we do about abortion and other issues," the bishop added.

Bill Canny, executive director of the USCCB's Migration and Refugee Services, said there's a concern by the bishops' conference as well as by Catholic and other organizations who work with migrants "that the quality of welcome our country offers these people, is not a quality welcome."

Unlike refugee resettlement, where agencies, with government and private funds, work together to integrate newcomers into a community, asylum-seekers such as the ones that have turned up in increasing numbers at the southern border have received services "focused on enforcement, making sure they get to check-ins," but there's little in terms of services, Canny said in a May 27 interview with CNS.

While they need legal support, they also come in need of food, housing and education, yet they're often released to crowded and sometimes substandard living conditions with relatives, Canny said, and get little support to adapt to their new communities as they wait the long process of having their cases adjudicated.

There's also an urgent concern of what the panorama for asylum-seekers in the country might look like if the Biden administration does away with something called Title 42 of the U.S. Code on governing the "Public Health and Welfare."

The Trump administration used the policy during the COVID-19 pandemic to instruct Border Patrol agents to expel anyone caught trying to enter the U.S. instead of processing them under existing immigration law. It has remained in place under the Biden administration.

Faith leaders have been calling on officials to put an end to it. Though it's hard to predict what will happen, some expect that if Title 42 goes away, it could mean a greater influx of migrants.

"Our big concern is welcoming with the eventual ending of Title 42," said Canny. "We will see asylum-seekers leaving these countries all over the world in order to seek safety, in order to provide for the families, to overcome gang violence. ... We expect that it will continue and it's going to be a persistent challenge. We want to discuss how we can meet that challenge."

Part of meeting that challenge means bringing in bishops from Central America's so-called Northern Triangle — El Salvador, Guatemala and Honduras — as well as Mexico with their USCCB counterparts to share ideas and experiences of migration as well as possible solutions from the perspective of the countries where many of the migrants to the U.S. are coming from, building relationships with them.

"They have a tremendous knowledge on the ground on these sending countries and transit countries," said Seitz. "What we're trying to do is see what we can do to help them address causes of people leaving. The church says people have the right to migrate, but they have the right to stay at home, too."

Dylan Corbett, executive director the Hope Border Institute in El Paso, in a May 25 call with CNS, said the range of experiences speaks to the urgency the USCCB sees "for the church to raise a moral message as we come out of pandemic and the displacement of people."

It's the first of new ways to work across borders, crafting not just a regional but a continental response to the consequences that will result because of the toll of COVID-19 has left in the Americas, he said.

The bishops' meeting comes days before U.S. Vice President Kamala Harris visits Guatemala and Mexico June 7 and 8. The visit is part of plan to lay out U.S. policy in the region, which aims to stave off migration, mainly from the Northern Triangle, by improving conditions for migrants at home.

However, an emerging wave of authoritarianism and continuing corruption has thrown a wrench in the vision President Joe Biden has entrusted to Harris.

Part of the plan the administration had proposed is increasing foreign aid to strengthen the "sending countries" by providing money for jobs but also getting rid of corruption. However, the administration recently announced it was redirecting money from the U.S. Agency for International Development meant for El Salvador's government of "concerns about transparency and accountability."

Government officials from El Salvador, as well Honduras and Guatemala, have been in the cross hairs of U.S. officials for their ties to narcotrafficking and corruption.

Politics | At urging of U.S. bishops, Catholic leaders to meet on immigration