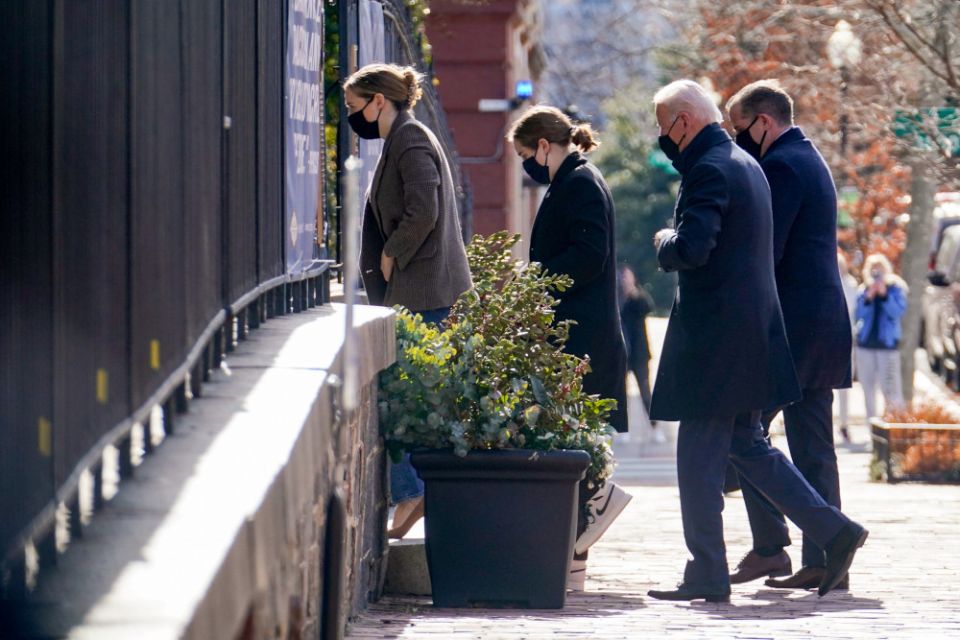 President Joe Biden and family members enter Holy Trinity Catholic Church in Washington Jan. 24, 2021. The U.S. bishops' pro-life chairman called it "deeply disturbing and tragic" that Biden or any U.S. president would mark the Jan. 22 anniversary of Roe v. Wade by praising the Supreme Court decision that legalized abortion and committing to codifying the ruling into law. (CNS/Reuters/Erin Scott)

Washington — The chairman of the U.S. bishops' pro-life committee called it "deeply disturbing and tragic" that any U.S. president would mark the Jan. 22 anniversary of the Roe decision that legalized abortion by praising it and committing to codifying it in law.

"I take this opportunity to remind all Catholics that the catechism states, 'Since the first century the church has affirmed the moral evil of every procured abortion. This teaching has not changed and remains unchangeable,'" the archbishop said in a statement released late Jan. 22 in response to a statement on Roe by President Joe Biden, a Catholic, and Vice President Kamala Harris.

Biden and Harris said their administration "is committed to codifying Roe v. Wade and appointing judges that respect foundational precedents like Roe." They did not use the word "abortion," but talked about "reproductive health" and protecting women's access to "health care."

"In the past four years, reproductive health, including the right to choose, has been under relentless and extreme attack," they said Jan. 22. "We are deeply committed to making sure everyone has access to care — including reproductive health care — regardless of income, race, ZIP code, health insurance status or immigration status."

Naumann said the bishops strongly urged Biden "to reject abortion and promote life-affirming aid to women and communities in need." 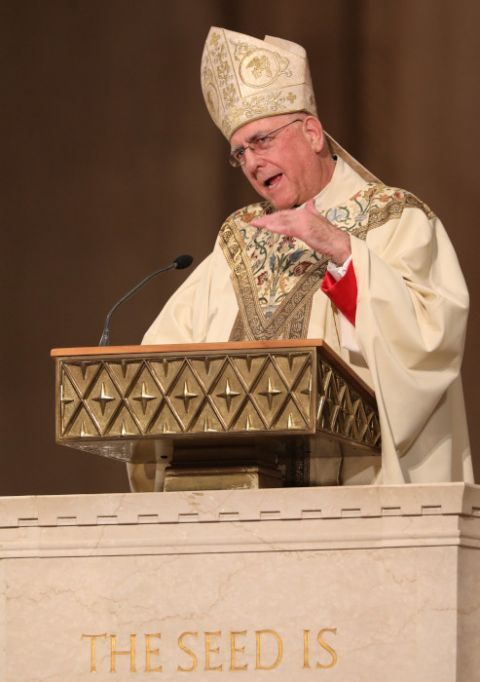 Archbishop Joseph F. Naumann of Kansas City, Kan., chairman of the U.S. bishops' Committee on Pro-Life Activities, delivers the homily during the opening Mass of the National Prayer Vigil for Life Jan. 23, 2020, at the Basilica of the National Shrine of the Immaculate Conception in Washington. (CNS/Bob Roller)

"Public officials are responsible for not only their personal beliefs, but also the effects of their public actions," the archbishop said. "Roe's elevation of abortion to the status of a protected right and its elimination of state restrictions paved the way for the violent deaths of more than 62 million innocent unborn children and for countless women who experience the heartache of loss, abandonment and violence."

In at least two states, abortion-related measures drew the attention of Catholic bishops on the Roe anniversary.

In Virginia, Bishop Michael F. Burbidge of Arlington and Bishop Barry C. Knestout of Richmond expressed "deep disappointment" with the state Senate's passage of a measure to expand abortion. In Texas, the state Catholic conference endorsed two major pro-life bills it said have bipartisan support in the Legislature.

Burbidge and Knestout said Virginia lawmakers have reversed "an important provision" Catholic leaders fought for 10 years ago that kept most abortions out of the state's health care exchange, which was created after the federal Affordable Care Act became law in 2010. The exchange is a virtual "marketplace" for those shopping for health insurance.

"Keeping taxpayer-subsidized abortion-on-demand out of the exchange is consistent with the federal Hyde Amendment, in place for more than four decades and which most Americans support," the bishops said. "Tragically, the Senate today took a far different path."

"Replacing the current life-saving restrictions on abortion with a policy of abortion coverage without limits in our state exchange is drastic, dangerous and will result in the tragic end to more unborn lives," they added, urging the state's House of Delegates to reject the Senate's move in a vote scheduled for the week of Jan. 25.

"Abortion is not health care; it ends lives instead of healing them," Burbidge and Knestout said. "We express our deep disappointment with this vote on a very solemn day in U.S. history. On this day when we reflect in particular on the more than 60 million unborn lives lost since the Roe v. Wade decision, and on every day, we continue to advocate with relentless determination for health care that affirms every life, born and unborn."

One of two pro-life bills backed by the Texas Catholic Conference of Bishops is the Human Life Protection Act, which would allow the state to immediately enact new legislation if the U.S. Supreme Court "changes precedent and allows states to protect unborn children before viability outside the womb."

Termed a "trigger ban," the law would be triggered such a court decision "and ensure that state laws would align with the new precedent," said a Jan. 22 news release issued by the conference, which represents 16 dioceses and 20 active bishops.

The second measure is the Texas Chemical Abortion Safety Protocol bill to improve safety standards for women exposed to these procedures, regardless of changes in regulations on the federal level.

If the U.S. Food and Drug Administration "allows abortion-inducing drugs to be available by mail or over the counter, bypassing medical oversight and regulation, then, without access to professional medical care, women’s lives could be in danger," the conference said. "The bill would provide regulations to ensure that chemical abortion procedures must meet the standards of care as currently established."

"There will be many other bills that will enhance the pro-life protections that Texas offers, but these two are the most critical," Jennifer Allmon, the conference's executive director, said in a statement.

"The Human Life Protection Act will allow the most efficient and effective method of reducing abortions in Texas as soon as the Supreme Court allows, and the chemical abortion safety protocol will address the safety of expectant mothers and unborn children who are potentially at risk," she said.

"These vulnerable Texans deserve special attention by our Legislature, and we encourage our representatives and senators to bring these bills to the governor’s desk," said Allmon.