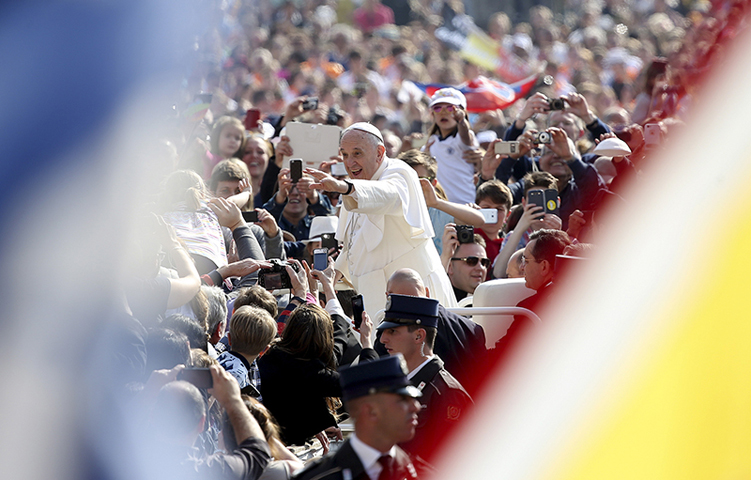 Pope Francis waves as he arrives to lead the general audience in St. Peter’s Square at the Vatican on April 15, 2015. (Reuters/Alessandro Bianchi)

Did you know that Pope Francis is so over?

Yes, despite the outpouring of goodwill for the pope in the two years since he was elected and the blanket coverage ahead of his highly anticipated Sept. 22-27 visit to the U.S., some pundits are committed to telling a hard truth: that the leader of the Roman Catholic Church has passed his sell-by date even before he lands in Washington.

“The list of disappointments with Francis seems to lengthen every day, from all quarters,” Elizabeth Stoker Bruenig wrote in The New Republic. “Pope Francis can’t win.”

From the conservative side, Ramesh Ponnuru warned in National Review that “his popularity here is dropping,” especially on the right.

So have we hit “Peak Pope” even before he arrives for his first-ever U.S. trip? Is the honeymoon finally over? Is “Francis fatigue” the new normal?

Actually, no. Or at least not yet.

The slender hook for much of the grand theorizing was a Gallup poll from July that indeed seemed to show scuffs on the pontiff’s once Teflon-quality favorability rating.

Only 59 percent of Americans gave him high marks, down sharply from a 76 percent peak early last year. Among conservatives, the drop-off was especially stark: Just 45 percent viewed Francis favorably, as opposed to 72 percent a year earlier.

Maybe that survey picked up some American disaffection with Francis’ denunciations of “savage” capitalism and income inequality, as well as his landmark document on the environment that called for radical changes to combat global warming.

Or maybe the survey was an outlier, which seems more plausible.

A Pew Research Center poll from a month earlier, in June, gave Francis a remarkable 86 percent approval rating among U.S. Catholics (and a steady 64 percent mark from all Americans), and that was virtually the same whether the Catholics were Democrats or Republicans, liberals or conservatives.

Those Pew results were then replicated almost to the digit in a Public Religion Research Institute poll in early August — a few weeks after the Gallup poll — that found Francis had a 67 percent approval rating among all Americans and a 90 percent positive mark from Catholics.

In late August, a Quinnipiac poll showed 66 percent of Americans giving Francis a thumbs-up, with the figure rising to 87 percent among Catholics.

So what explains the fascination with the apparently mythical decline and fall of Francis?

First, any counternarrative is a better story than the deathly conventional wisdom. No one wants to read what they already know, and columnists enjoy telling readers that everything they heard from those other media people was wrong.

Second, a dip in the polls, if real, would confirm pundits’ predictions on both ends of the spectrum.

Conservatives could point to a decline in support as evidence they always prophesied, that the liberal media and the public would sour on Francis once they realized he was still an orthodox Catholic and hardly different from his tradition-minded predecessor, Benedict XVI.

A drop in conservative support would also affirm their own influence — showing that their pointed jabs at Francis had an effect — and it would send a warning shot to Francis to alter his message or face a possible schism.

Liberals could take a similar tack, but instead could say that the popularity drop showed how those supposed papal loyalists on the right were just like the so-called “cafeteria Catholics” on the left they criticized for so long, only worse: Their attacks were hurting the pope.

And those on the left who were not fans of the Catholic Church and always agreed with their conservative counterparts that Francis is just more of the same could say, “Told you so!”

What the polls seem to demonstrate, in reality, is that Francis may not be as divisive or as upsetting to the public as he is to the pundits, or that people aren’t paying close attention to either what the pope or the pundits are saying.

That all could change, of course, when Francis visits the U.S. and Americans get their first up-close-and-personal look at him, and tune in to what he says. If they find his words unsettling, then the pundits may yet prove to be prophets.

On the other hand, church sources say the pope knows he faces serious criticism in the U.S., and he has acknowledged, when challenged on his critiques of capitalism and focus on the poor, that he will need to address the concerns of the middle class more directly.

So perhaps he won’t hit as hard on some of his more controversial themes, so as not to turn off and tune out his American audience.

Also, history shows that papal favorables usually rise after these visits, which tend to be more about pastoral optics than doctrinal finger-wagging.

Pope Benedict, for example, an introverted, scholarly theologian with a reputation as a guardian of orthodoxy, saw a bump in his ratings following his one and only American trip, in April 2008.

Francis himself seems unfazed. He dislikes the celebrity aspect of his job, aides say, but has told them to use it if it can advance the message of the gospel.

As Francis told an interviewer this week: “Jesus also, for a certain time, was very popular, and look at how that turned out.”