When it comes to LGBTQ Catholics, what Pope Francis giveth, the Vatican taketh away 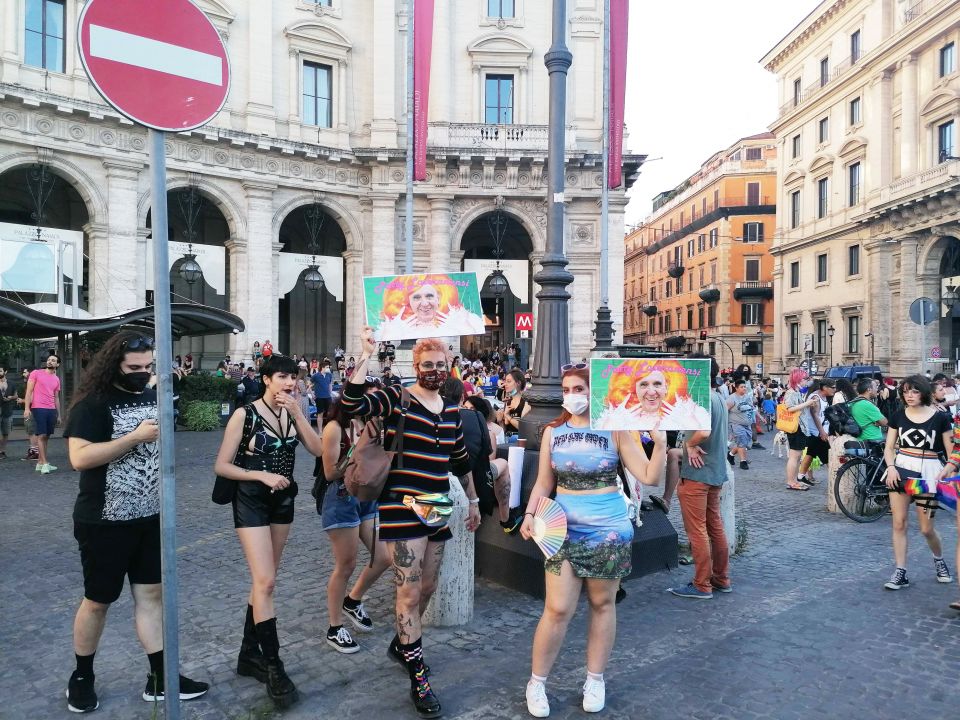 Vatican City — At last month's Pride parade in Rome, members of the city's LGBTQ community waved rainbow flags, strewed glitter and generally exuded love to fellow marchers and those along the route. When they occasionally showed flashes of ire, their mockery and ridicule were aimed at some of Rome's most familiar figures: Pope Francis and the Vatican hierarchy.

Some shouted at the churches they passed; others held sparkly signs with double-entendres aimed at the pontiff. Still others strutted their stuff dressed as Francis himself.

What angered Italian LGBTQ citizens was what they considered undue interference by the Vatican in its attempt to stall a controversial bill being debated in the Italian Senate that would criminalize homophobia. Named for its author, politician and activist Alessandro Zan, the bill would also institute a day aimed at raising awareness of sexuality and gender issues in schools.

Italian bishops have twice voiced their concerns about the Zan bill, claiming it would violate the religious freedom of Catholic schools, hospitals and other institutions. When that admonition fell on deaf ears, the Italian bishops’ conference sent a diplomatic note to the Italian government on June 22. The Zan bill, the bishops argued, violated the accords signed in 1929 between Italy and Vatican City, known as the Lateran Treaty, that set expectations for mutual noninterference.

In the middle of this heated debate, Francis sent a letter to the American Jesuit priest James Martin, about Martin's efforts to promote inclusivity and to welcome LGBTQ individuals in the church.

"Our Heavenly Father comes close with love to each one of his children, each and everyone," Francis wrote in the letter, praising Martin’s work.

Ever since Francis answered a question about a gay priest in 2013 with his own now famous question, "Who am I to judge?," many Catholics have hailed the pontiff as a beacon of hope for LGBTQ inclusivity.

But while Francis has often shown in his words and personal acts of charity that he is close to LGBTQ individuals, the Vatican as an institution has done little to recast its hard doctrinal line, which views homosexuality as sinful and as "intrinsically disordered."

"I can understand that it’s very confusing for people," said Juan Carlos Cruz, a clerical abuse survivor and member of the LGBTQ community who frequently meets with Francis at the Vatican.

Despite the Vatican’s recent interference on the Zan bill, "that’s not who Pope Francis is," Cruz said, adding that in private conversations the pontiff makes it clear that not only did God make the activist gay, but loves him the way he is.

Cruz made it clear that while he enjoys a personal relationship with the pope, and while Francis appointed him to the Pontifical Commission for the Protection of Minors in 2020, he is not a papal spokesperson.

Jamie Manson, president of Catholics for Choice and a longtime activist for LGBTQ rights in the Catholic Church, believes that Francis "wants to be compassionate and merciful to marginalized people — he sees us as marginalized people — but he doesn’t want to change the teachings that will free us from marginalization and get us justice."

Catholic LGBTQ organizations are divided, Manson explained, between those who believe that "appealing to mercy and pulling at heartstrings" will lead to change in the Vatican and those who "have run out of patience."

Since the beginning of this pontificate the Vatican and Francis himself have issued conflicting statements on LGBTQ matters. In March, just as the Vatican’s Congregation for the Doctrine of the Faith put out a document banning blessings of gay couples — "God cannot bless sin," it read — Francis was heard supporting civil unions for gay individuals in an interview with Mexican broadcaster Televisa.

Occasionally the pontiff's statements on homosexuality seem to contradict themselves. He has personally supported LGBTQ individuals in Italy and in Argentina — and last September, speaking to Italian parents of LGBTQ children, Francis said that "God loves their children as they are" and so does the Catholic Church. But he has also criticized gender theory, comparing it to nuclear weapons and calling it a form of ideological colonization.

The dynamic can be attributed to a "hate the sin, not the sinner" approach, but according to Cruz, it also suggests that there is not a little opposition to Francis' support for LGBTQ Catholics among Vatican officials.

"I’ve never seen in my life a more political and LGBTQ-obsessed Curia," he said. "It is sad to see how much Pope Francis wants to support and open his arms to the LGBTQ community and how much they put land mines in his path to be able to do it," he added.

Concerning the CDF's ban on the blessing of same-sex couples, which occurred shortly after Francis returned from his historic trip to Iraq, Cruz said he believes that "in some way (the pope) is going to try to repair the harm that document did."

The CDF document, approved by Francis, seemed to be an attempt to rein in the discussions taking place in Germany known as the Synodal Path — a series of conferences involving local bishops and laity that has taken a progressive line on questions regarding sexuality and power structures in the Catholic Church. But LGBTQ Catholics in other countries regarded it as a gratuitous slap, and despite the ban from the Vatican, some German clergy have continued to bless same-sex couples.

Manson praised the pope for opening the conversation on LGBTQ issues in the church, which she believes has led to "meaningful change," but she added that the time for talk is over. She called for the pope to meet with members of the LGBTQ community at the Vatican and publicly acknowledge his private statements on LGBTQ issues.

Cruz said that he known he’s "lucky" to be able to speak to the pope directly on these topics, praising Francis’ efforts to evolve the Vatican’s understanding of LGBTQ individuals, while adding that "we cannot change church teaching in a minute."

He also longs for the pope to speak openly on these topics, he said, and for him not to "let others define it for him."

Politics | When it comes to LGBTQ Catholics, what Pope Francis giveth, the Vatican taketh away