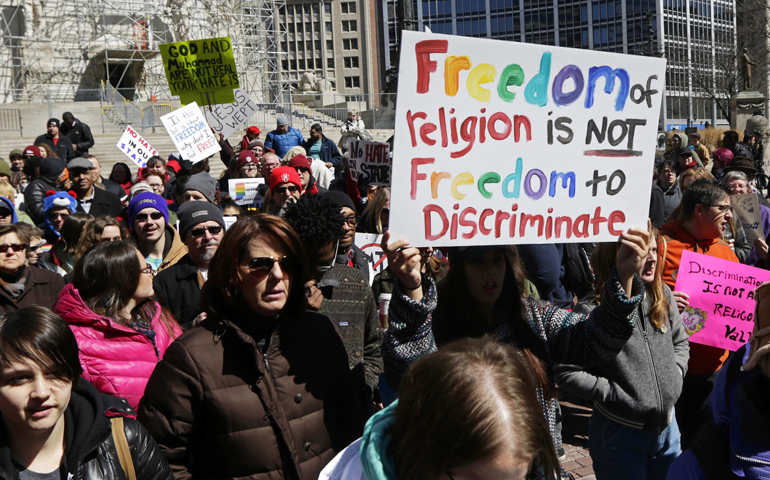 Before this week, few people had heard of the Religious Freedom Restoration Act or could even pronounce its acronym, RFRA (Riff-ra), even though there's a federal version of the law and 20 states have passed their own versions. Is it a "license to discriminate," as liberals claim, or a "protection of religious freedom," as conservatives claim?

There are three sources for Indiana's RFRA: the religious exemptions movement, RFRA's own history and, most recently, the Hobby Lobby case.

First, the idea of religious exemptions to civil rights laws is as old as civil rights laws themselves. In the 1970s, for example, conservative Christian organizations demanded exemptions to the Civil Rights Act and similar laws. The most famous of these was Bob Jones University, which maintained race-based admissions and housing policies all the way into the 1990s. The Supreme Court dealt these organizations a blow, however, when it upheld an IRS decision to strip Bob Jones of tax-exempt status.

Religious exemptions are also widespread in the area of reproductive health. Doctors, nurses and even entire hospitals are routinely exempt from having to perform or assist in abortions. These exemptions are now being extended to pharmacists not wishing to dispense contraceptives -- and, most famously, to corporations not wanting to pay for insurance coverage for them.

Such exemptions are always a matter of scope. Nearly everyone would agree, for example, that a priest should be exempt from civil rights laws; he should not have to solemnize a same-sex wedding or an interreligious one if doing so is against his religious belief.

But what about a public pavilion owned by a church that advertises itself as available for rent? Or how about a privately owned hotel not wanting to rent a room to a gay couple? These are all actual cases, and they point out how religious exemptions are a matter of degree.

The second root of Indiana's crisis is RFRA itself. In 1993, the federal RFRA was passed in response to a Supreme Court case that found Native Americans guilty of drug laws for having ingested peyote. This seemed like the wrong result to a wide variety of people, and so when RFRA passed, it was nearly unanimous -- supported as much by Democrats as Republicans.

What RFRA did -- in the federal and later in state versions -- was change the way courts interpreted competing rights claims. It replaced the balancing test that the Supreme Court had used in the Native American case with a much more exacting standard, requiring a "compelling state interest" justifying a ban on religious practice, an action "narrowly tailored" to that interest, and the "least restrictive" means of pursuing it.

This is a very high standard, and it's meant to block all but a few government actions.

Until the last few years, though, RFRA cases were victimless. No one is personally affected if the Native American uses peyote, a military officer wishes to wear a yarmulke or a church seeks a zoning variance. None of these carried what lawyers call "third-party harms."

That all changed in the 2000s as conservative activists began using RFRA in a new way: as a sword, rather than a shield. Now, they argued, my religious belief should trump your civil rights. Gays and lesbians may see the florist's refusal as discrimination, but she sees it as freedom of religion.

In that case, the Supreme Court decided, for the first time, that RFRA could be sword as well as shield. A corporation could deny someone their legal rights, then claim religious freedom as a defense.

That was a game-changer. With the court's imprimatur, a host of lawsuits were filed around the country using RFRA to defend against claims of discrimination. Those lawsuits are still ongoing.

Which brings us to Indiana. Yes, as Gov. Mike Pence has said many times, 19 other states also have RFRAs. But Indiana is only the second state, after Mississippi, to pass one in the new, post-Hobby Lobby reality.

Arizona's governor vetoed that state's version, Oklahoma dropped its, and Georgia and Texas appear poised to reject their versions. Late Tuesday afternoon, though, Arkansas passed its own RFRA measure, which will now go to Gov. Asa Hutchinson for his signature or veto.

Now, is Pence right that this law is just about protecting religious freedom? Or are his opponents right that it's about legalizing discrimination?

Both are -- but the opponents more so.

On the surface, Pence is correct. The law prohibits government restriction of religious exercise without a compelling state interest.

In reality, though, this law and others like it have been advanced by social conservatives who repeatedly give examples about LGBT people: a photographer in New Mexico found guilty of civil rights laws for turning a gay couple away, a baker in Colorado, a florist in Washington, that church-owned pavilion in New Jersey. These are all actual, not hypothetical, cases.

And how you see them depends on whose perspective you want to take. The plaintiffs are generally sincere; that New Mexico photographer really felt that her religion forbade her from "participating in" a same-sex wedding. How can the government force her to violate her conscience?

Then again, from the perspective of the customers she turned away, the sting of discrimination is real. And what kind of message would it send, allowing "No Gays Allowed" signs to be posted around town? And why wouldn't the same logic apply to Jews, African-Americans, women -- anyone, really?

One resolution to this conflict might be to remember that corporations have to play by the rules of the marketplace. This is not what the Supreme Court said in Hobby Lobby, but it might help the photographer who feels sincerely torn. Render unto Caesar what is Caesar's, the Bible says -- anti-discrimination law included.

Really, though, the Indiana case is about politics, not religious philosophy. Pence is an ambitious politician, and he gave his conservative backers what they wanted. Now it all may backfire. Seventy-five percent of Americans oppose discrimination against LGBT people, even though only 55 percent support same-sex marriage. Moreover, while America remains a uniquely religious nation, it also respects the rule of law. And letting people discriminate because of religion is not what the rule of law is about.

[Jay Michaelson is a columnist for The Daily Beast and author of the 2013 report "Redefining Religious Liberty: The Covert Campaign Against Civil Rights."]