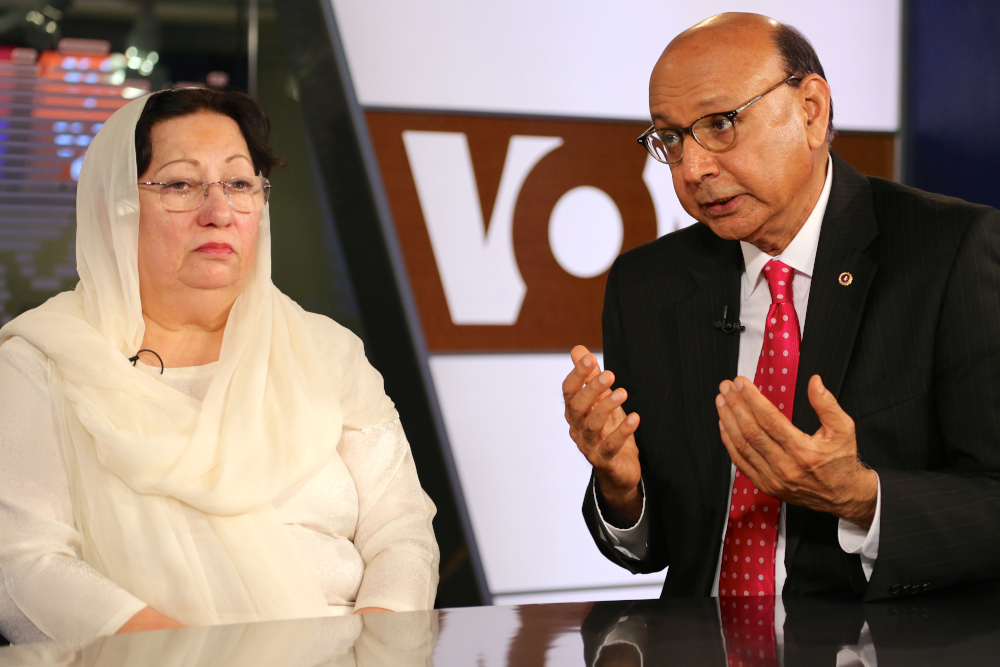 Khizr and Ghazala Khan, the parents of an Army captain killed in Iraq, speak with Voice of America’s Urdu service Aug. 1, 2016, in Washington, D.C. (AP/WIkimedia/Creative Commons/Voice of America/B. Allen)

The White House announced July 30 a slate of nominations and appointments for top religious affairs roles, including the first Muslim American nominated to be the U.S. ambassador-at-large for International Religious Freedom.

President Joe Biden will select Rashad Hussain as his nominee for that post, filling a State Department slot vacant since former Kansas governor and U.S. Senator Sam Brownback left at the close of the Trump administration. Hussain, who would need to be confirmed by the Senate, currently works as director for Partnerships and Global Engagement at the National Security Council.

He previously served as White House counsel under President Barack Obama, as well as U.S. special envoy to the Organization of Islamic Cooperation and U.S. special envoy for the Center for Strategic Counterterrorism Communications, among other roles.

Anila Ali, a co-founder of the American Muslims and Multifaith Women's Empowerment Council Iftar who has worked with Hussain in the past, also celebrated his nomination.

"As AMMWEC, and as a woman leader, I look forward to working with him because women play an important role in peace-making," Ali said. "He has worked with Muslim communities during the Obama period and we hope his relevant experience is going to make him a voice for all of us."

Biden is also expected to nominate Deborah Lipstadt as the next U.S. special envoy to monitor and combat antisemitism. Lipstadt is a professor at Emory University in Atlanta and a prominent Holocaust historian.

She is the author of Antisemitism: Here and Now and is known for successfully defeating a libel suit brought against her by Holocaust denier David Irving.

"We are greatly heartened by the anticipated announcement of Prof. Lipstadt to continue our nation's fight against antisemitism both here and abroad," said Mark (Moishe) Bane, president of the Orthodox Union. "She is a leader with great moral courage; her dedicated work, clear voice in fighting Holocaust denial and preserving the memory of the attempted destruction of the Jewish people make her an exemplary choice for this role."

Lipstadt, who would have the rank of ambassador, also requires Senate confirmation. The anticipated announcement follows a May 24 letter from several leading Jewish organizations calling on Biden to address the recent rise in antisemitic attacks.

"The presence and efforts of an Ambassador to Monitor and Combat Antisemitism send a powerful signal to governments around the world that the U.S. takes combating antisemitism seriously and calls on them to do the same," the letter said.

Khan became famous in 2016 when he and his wife, Ghazala, spoke during the Democratic National Convention as "Gold Star" parents, discussing their son, Humayun, a U.S. Army captain who died in Iraq in 2004.

Khan, a Harvard-educated Muslim immigrant, directly challenged then-candidate Trump's proposal to ban Muslims from entering the United States, accusing the business mogul of having sacrificed "nothing — and no one."

"Let me ask you, have you even read the United States Constitution? I will gladly lend you my copy," Khan said as he held aloft a worn booklet containing the text of the document.

Khan, the founder of the Constitution Literacy and National Unity Project, runs his own law practice and has authored three books, including Founding Documents of the United States of America.

Kleinbaum already served as a USCIRF commissioner in 2020 and leads the Congregation Beit Simchat Torah in New York City, a community that centers LGBTQ people. A human rights advocate, she also sits on Mayor de Blasio's Faith Based Advisory Council and serves on New York City's Commission on Human Rights. In addition, she is a board member of the New York Jewish Agenda and the New Israel Fund.