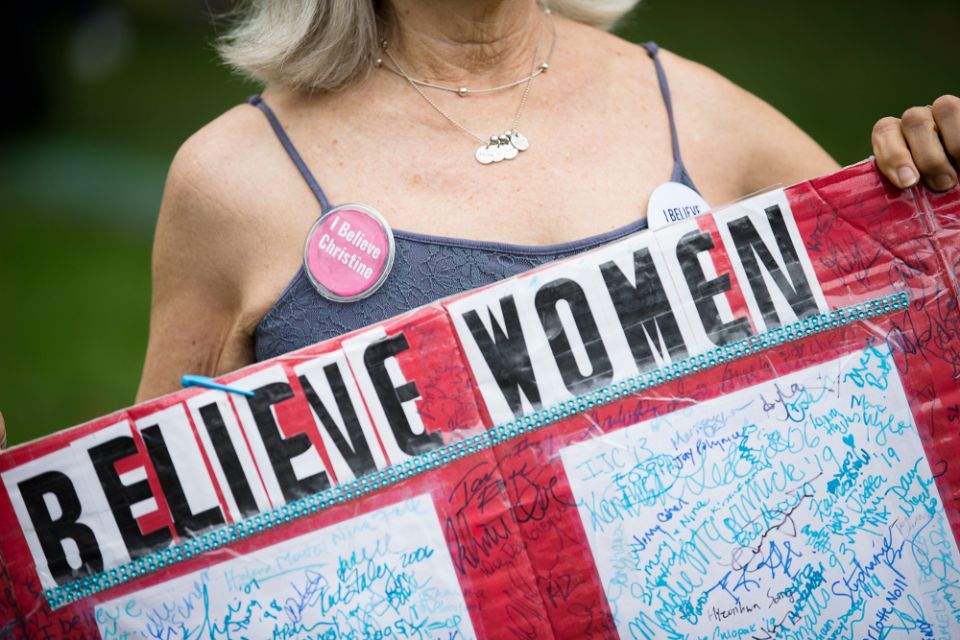 A protester of embattled Supreme Court nominee Brett Kavanaugh are seen Oct. 5 near the U.S. Capitol in Washington. (CNS/Tyler Orsburn)

Washington — The Supreme Court's past year will probably be remembered more for the shakeup at the bench than for specific rulings.

Many praised the judge's qualifications and were pleased that the president had fulfilled his campaign promise to nominate a pro-life judge to the Supreme Court, but the choice angered many Americans displeased that Kavanaugh's vote as a justice could potentially reverse the court's 1973 Roe v. Wade decision legalizing abortion.

Kavanaugh, who is Catholic, spoke about putting his faith in action during Senate confirmation hearings. He said he regularly served meals with Catholic Charities' St. Maria's Meals program in Washington and that talking to the people there helps him to understand the situation that they are in. He also spoke about coaching his daughter's CYO basketball team, and the players came in uniform to one of the hearings to show their support.

Protests about his nomination began the night he was announced as a potential replacement of Kennedy and continued until his swearing in, intensifying during Senate confirmation hearings, particularly the Sept. 27 hearing concerning Christine Blasey Ford's allegations of a sexual assualt by Kavanaugh when they were in high school, which he denied.

That same day, the Jesuit publication, America magazine, published an online editorial saying that although it "previously endorsed the nomination of Judge Kavanaugh on the basis of his legal credentials" it now said his nomination should be withdrawn "in the best interests of the country."

Other Catholic organizations urged support for Kavanaugh, including the Knights of Columbus Supreme Council, which urged its members to contact their senators and ask them to vote for his confirmation to the high court. An online effort at www.catholicvote.org asking Catholics to support a petition in support of Kavanaugh had gathered more than 17,000 signatures the day after the final Senate Judiciary Committee hearing.

The Senate confirmed Kavanaugh as a Supreme Court justice in a 50-48 vote Oct. 6, days after the Supreme Court had resumed its new term. 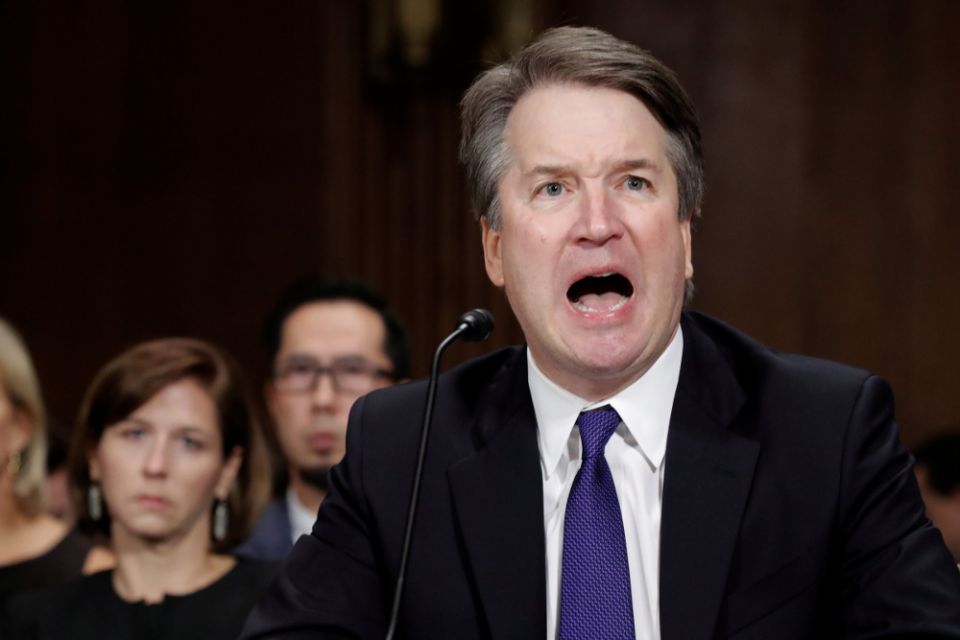 The court's new session did not have the drama of high-profile cases on hot-button issues.

Kavanaugh missed one of the court's two death penalty cases for the current session argued Oct. 1. The second case, argued Nov. 6, was about using an alternative execution method on a death-row inmate with a rare medical condition.

Without Kennedy, often the swing vote, on the court, all eyes were on Kavanaugh in the oral arguments in this case. His death penalty views were unknown since as a federal appeals court judge he rarely heard capital punishment cases. But in oral arguments before the Supreme Court, his pointed questions to the state's attorney indicated he might favor the inmate's request for an alternate form of execution.

In an abortion-related case that could have come before the Supreme Court this term, Kavanaugh was among the majority of justices who agreed not to take it. The case was an appeal from Kansas and Louisiana on lower court rulings that have stopped those states from blocking Medicaid funds from going to Planned Parenthood. The case needed four justices to approve hearing arguments in order for it to move forward.

Pro-life leaders said they were disappointed with the court's decision, saying that while federal funds cannot be used for abortions, Planned Parenthood should not get Medicaid funding because its facilities primarily perform abortions.

Catholic Church leaders weighed in on many of these cases, submitting friend-of-the-court briefs and issuing statements after the decisions were announced.

In the case of the same-sex wedding cake, the U.S. bishops sided with the court's 7-2 decision in favor of the Colorado baker who cited religious beliefs in declining to make the wedding cake for a same-sex couple. The narrow ruling said the baker's religious freedom had been violated by the state's Civil Rights Commission, but it did not determine if a small business can invoke federal free-speech and religious-exercise rights to deny services to same-sex couples.

The Catholic bishops also sided with the court's 5-4 ruling that a California law requiring pregnancy centers to tell patients about the availability of state-funded abortion services violated the First Amendment. They disagreed with the court's 5-4 decision in the case about union dues where the court overruled its previous decision allowing state agencies to require their union-represented employees to pay fees to the union for collective bargaining costs even if they are not union members. 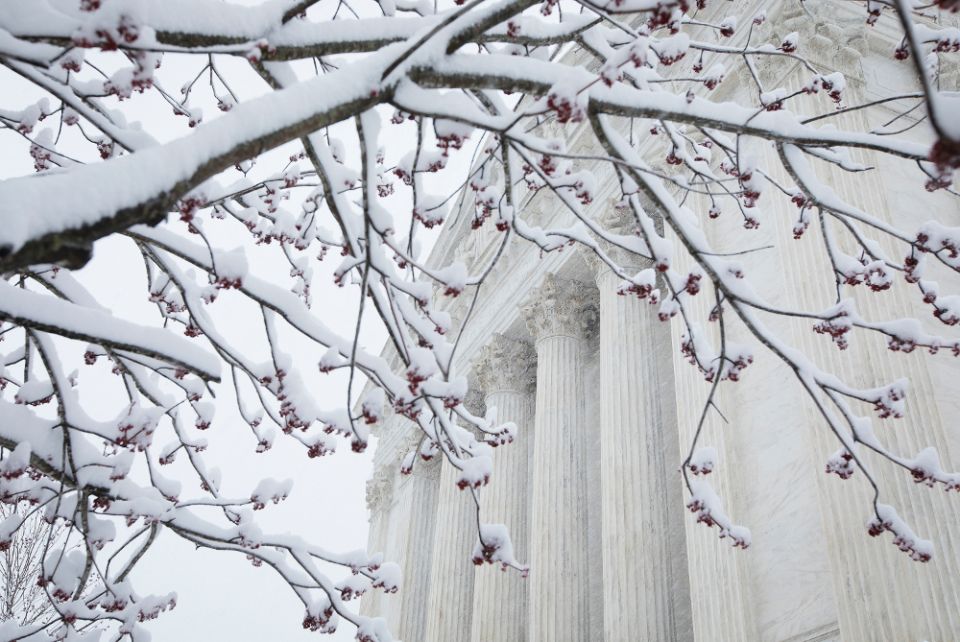 Cherry blossoms are seen in front of the U.S. Supreme Court in Washington March 21. (CNS/Tyler Orsburn)

One case that might have seemed under the radar for Catholic leaders was the 6-3 ruling that cleared the way for states to legalize sports betting, striking down a 1992 federal law, but editorials in at least two Catholic archdiocesan newspapers warned about some potential dangers of this decision saying it could bring about an increased addition to gambling.

In a death penalty case, the Supreme Court unanimously ruled in favor of a Texas death-row inmate, ordering a federal appellate court to reconsider his requests for funding to investigate his claims of mental illness and substance abuse.

In abortion decisions earlier this year, the justices threw out a lower court's ruling that allowed a 17-year-old last year to obtain an abortion while she was in a detention center after an illegal border crossing. The court also said it would not hear a case against an Arkansas abortion law, thus letting the state's restrictions on abortion-inducing drugs stand.

In immigration cases, the court early in the year ruled that some immigrants detained by the government can be held indefinitely and it also declined to hear and rule on whether the administration has the right to shut down the Deferred Action for Childhood Arrivals, or DACA program, which the U.S. bishops have supported.