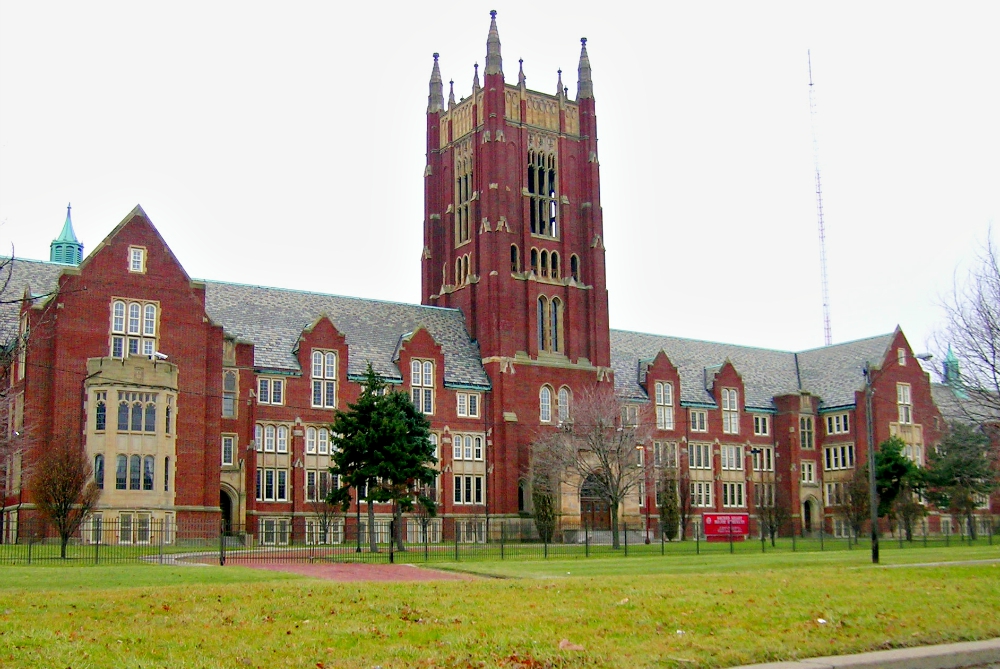 Editor's note: This is the second part of a series focusing on seminaries in the United States. Every priest, including those accused of sexual abuse or those who disagree with Pope Francis, attended seminary. How are priests being formed? Who is teaching them? How are seminaries adapting to the new wave of abuse crises and condemnation of clericalism from the papacy? NCR will attempt to answer these questions and more. Read the first part here.

Pope Francis is confusing, is weak on enforcing doctrine, and sows discord among believers, according to a cadre of faculty at Sacred Heart Major Seminary here who regularly express their consternation online and in other public forums.

Behind the iron gates of Sacred Heart Seminary, noted for its imposing Gothic architecture, there is a loyal opposition to Pope Francis, with a number of professors questioning the pontiff's approach to doctrinal and moral issues. They say he is too lax on a roster of issues, including LGBT people in the church, capital punishment, and Communion for divorced and remarried Catholics.

Sacred Heart students include 120 seminarians studying for 10 dioceses and an eparchy from the Midwest, as well as four religious orders, and 365 lay students, most of whom are studying for teaching and lay ministry positions in the Detroit Archdiocese.

Some Sacred Heart professors have suggested that the pope should resign. One noted on social media that Francis' most prominent clerical critic, Archbishop Carlo Maria Viganò, should be pope, a post that was quickly edited with an added "(jk)," meaning "just kidding."

Another professor, Edward Peters, argued in an online post Sept. 5, 2018, that if Viganò's accusations are true that the pope knew about sexual harassment and abuse by former Cardinal Theodore McCarrick, Francis should resign.

Peters, a professor of canon law, has argued on his contentious blog that Francis has been pastorally reckless and wrongheaded in his approach. The most outspoken of the pope's social media critics from Sacred Heart, Peters also argues that the pope overstepped his authority with a blanket condemnation of the death penalty last August.

Ralph Martin, a professor who focuses on evangelization and the Catholic Charismatic Renewal movement, wrote in a post after the Viganò revelations, "We all agreed that Pope Francis has said and done some wonderful things." But, he added, "he also has said and done some things that are confusing and seem to have led to a growth of confusion and dissent in the Church."

The pope, said Martin, has veered to "universalism," the belief that nearly everyone is saved. "Grave damage has been done to the credibility of the church," he wrote, and Catholics now question, because of Francis' teachings, whether hell exists.

That theme of Francis sowing "confusion" was echoed in a March 2017 address given at the Franciscan University of Steubenville by Eduardo Echeverria, a professor of moral theology at Sacred Heart.

Janet Smith, a professor of life ethics, has argued that homosexuality among clergy needs to be rooted out in the church. Smith has been active in conservative political causes. On one website focusing on the Catholic vote before the 2016 election, she noted, "I am voting for [Donald] Trump because he is not Hillary Clinton." She also pledged her financial support for the Trump campaign.

According to a screenshot of a Facebook post dated Nov. 29, 2018, Smith wrote that there may be a need to risk schism in order to clean up the church. That post no longer appears on her Facebook timeline.

Smith, who has returned to teaching after a recent leave of absence, is on the board of a group called Better Church Governance,* which has as its mission the investigation of cardinals who are lax on sex abuse. Her faculty chair at Sacred Heart is funded by the Knights of Columbus.

In the small world of those familiar with what is taught at Sacred Heart, there is a reluctance to comment on how and why the seminary has become an anti-Francis bulwark among some of its most prominent faculty. Only Smith would speak to NCR, and she would do so only via emailed responses. Msgr. Todd Lajiness, Sacred Heart rector, also refused to comment.

But some students have noticed what they describe as a traditionalist bias among the faculty, even if, they say, it rarely exhibits itself in the classroom and is mostly expressed via social media.

One lay student, who said his professional ministry depends on the archdiocese and is reluctant to be identified, said he was shocked when Smith made the "Viganò for Pope (jk)" post on Facebook. "My jaw just dropped. Even if it's in jest, it's so incendiary," the student said.

One church professional, who requested anonymity, noted that some of Sacred Heart's newly ordained graduates have difficulties finding parishes that will accept them.

"That institution does not prepare priests who can relate to current lives," he said. Many, he said, come unwilling to do the kind of ministry work that pastors want them to do. He described Sacred Heart as an incubator of clericalist attitudes. 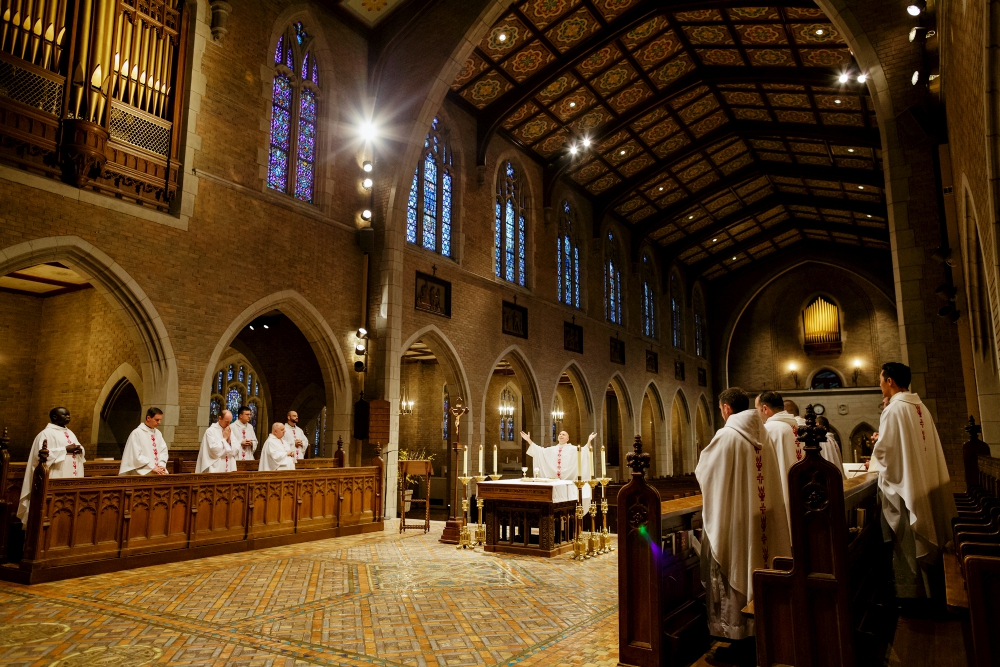 But Smith counts herself as among the growing number of lay seminary professors, including women, who provide a check on clericalist attitudes.

"Having strong-minded women teach in seminaries can be useful for combating clericalism for both the seminarians and the priests on staff," she wrote. Smith's reputation is one of being strong-minded, particularly in her support for Humanae Vitae, the papal encyclical that opposed artificial birth control, and in support of efforts to oust sexually active gays** from the priesthood and from influential church leadership roles.

While students agreed that much of the social media influence of Sacred Heart professors leans toward traditionalism, they said that the professors rarely use the classroom to indoctrinate students in opposition to Francis.

"In particular when Amoris Laetitia came out, a professor brought up concerns over the ambiguity of certain passages of the document. To the professor's credit, he kept his critique related to the topic of the course," said one lay student who also requested anonymity.

One recent graduate, Fr. Robert Bacik, now pastor of St. Isidore Church in Laingsburg, Michigan, a part of the Lansing Diocese, said that Francis' call for priests to be shepherds who smell like the sheep was a popular part of the curriculum at Sacred Heart. "It was used often in our pastoral formation," he said.

Still, in the topsy-turvy Catholic world, liberal-minded seminary professors used to be criticized, and sometimes dismissed, for taking popes to task for being too strict on issues such as human sexuality. It's now traditionalists who are taking the pope to task. That critique has its limits, said Smith.

"Seminary professors need to be careful to follow the Church's guidelines regarding questioning of Church teaching. We have all taken the oath of fidelity," she said. "I believe that my colleagues and I keep our oath and abide by the limits set out by the Church."

Read this next: Jesuits in formation fit in with other theology students at Boston College

Criticism of Francis is justified, she wrote, as long as the papal office is respected.

"If we are speaking about governance that is practical and doesn't involve doctrinal issues, I doubt there is much that is off limits. Of course, all criticism must be respectful of the office and the person," she wrote.

She warned against "uncritical acceptance of every utterance of a pontiff," which, she wrote, "is both clericalism and a kind of papolatry. But if faculty are dissenting from Church teaching or dismissing papal statements out of hand, that is a serious problem. Seminarians deserve to be taught the fullness of the faith. They also must respect both the office and the person of the Holy Father."

Sacred Heart's administration has, in recent years, been a pipeline to bishop positions. Former rectors include John Nienstedt, former archbishop of St. Paul-Minneapolis, who was forced to resign after sex abuse scandal in his archdiocese, and Archbishop Allen Vigneron of Detroit, who, as rector, purged seminary of professors considered too liberal, according to a 2009 Detroit Free Press article.

Now the times have apparently changed. Should a school directed to form future church leaders, whether pastors or parish ministers, feature a faculty dominated by those who oppose the current pope? Or is that opposition simply a sign of the diversity of thought now current in the Catholic world? Leaders of the Detroit Archdiocese and Sacred Heart Seminary declined to comment.

[Peter Feuerherd is a correspondent for The Field Hospital, NCR's continuing series of stories on parish life. He can be reached at pfeuerherd@ncronline.org.]

* This article has been edited to correct Smith's working status and her relationship to Better Church Governance.

** This article has been edited to clarify Smith's stance on gay priests.

Read this next: Catholic abuse scandal galvanizes Mount Angel seminarians' resolve
A version of this story appeared in the Feb 22-March 7, 2019 print issue under the headline: Pope Francis’ critics at Sacred Heart Seminary in Detroit are vocal online.