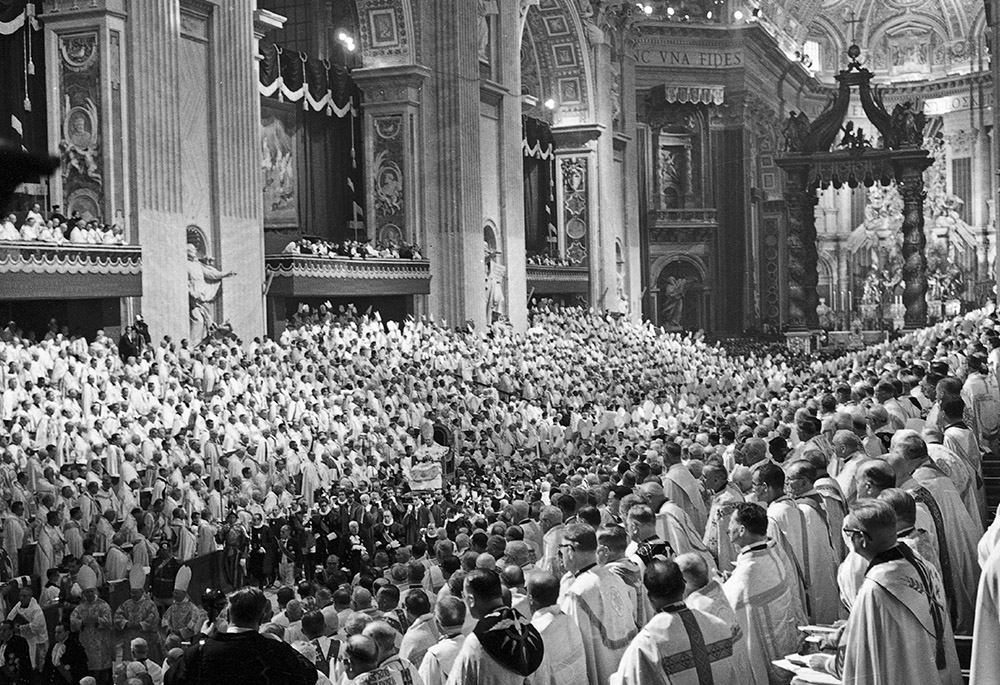 Pope Francis on Oct. 11 marked the opening of the 60th anniversary of the Second Vatican Council — a three-year period that launched landmark reforms in the Catholic Church's relationship to the world around it and the church's own liturgy and practices — by pleading for the church to "overcome all polarization and preserve our communion."

In a Mass in St. Peter's Basilica, which served as the council's chambers during the 1962-1965 meetings, Francis said the council, which was inaugurated by Pope St. John XXIII, was "one great response" to the question "Do you love me?" posed by Christ to his disciples.

"To rekindle her love for the Lord, the church, for the first time in her history, devoted a council to examining herself and reflect on her nature and mission," said Francis. "She saw herself once more as a mystery of grace generated by love; she saw herself anew as the people of God, the body of Christ, the living temple of the Holy Spirit!"

Yet while the ecumenical council revisited many areas of Catholic doctrine, reassessed its relationship with other Christian communities and religions, revised Catholic liturgy to allow for the vernacular, and reconfigured church structures to allow for greater participation of the laity, in the 60 years that have followed, it also proved to be a flashpoint among various ecclesial circles.

Related: Dream of 'synodality' is a fruit of Vatican II, Cardinal Grech writes

During the 60th anniversary Mass, Francis lamented that those changes had sometimes led to deep divisions within the church.

"How often, in the wake of the council, did Christians prefer to choose sides in the church, not realizing that they were breaking their mother's heart! How many times did they prefer to cheer on their own party rather than being servants of all? To be progressive or conservative rather than being brothers and sisters?" he asked.

"To be on the 'right' or 'left,' rather than with Jesus? To present themselves as 'guardians of the truth' or 'pioneers of innovation' rather than seeing themselves as humble and grateful children of holy mother church?" he continued. "That is not how the Lord wants us to be. We are his sheep, his flock, and we can only be so together and as one."

While the work of the council and the years that followed radically altered the Catholic Church's relationship with the rest of the world and realigned itself with a more open posture to it, in marking its anniversary, Francis also warned against the temptation of "worldliness."

"Let us be careful: Both the 'progressivism' that lines up behind the world and the 'traditionalism' that longs for a bygone world are not evidence of love, but of infidelity," he cautioned. "They are forms of a Pelagian selfishness that puts our own tastes and plans above the love that pleases God, the simple, humble and faithful love that Jesus asked of Peter."

"Let us be careful: Both the 'progressivism' that lines up behind the world and the 'traditionalism' that longs for a bygone world are not evidence of love, but of infidelity."
—Pope Francis

Throughout his homily, Francis revisited many of the central themes from his own nearly decadelong papacy, especially his call for a church committed to evangelization and prioritizing the needs of the poor.

"You are not here to shepherd yourselves," the pope said to the hundreds of clergy present in St. Peter's, "but others — all others — with love. And if it is fitting to show a particular concern, it should be for those whom God loves most: the poor and the outcast. The church is meant to be, as Pope John put it, 'the church of all, and particularly the church of the poor.' "

The council, the pope said, calls for a church that is "madly in love with its Lord and with all the men and women whom he loves" and "that is rich in Jesus and poor in assets" and "a church that is free and freeing."

"A church in love with Jesus has no time for quarrels, gossip and disputes," the pope added. "May God free us from being critical and intolerant, harsh and angry! This is not a matter of style but of love. For those who love, as the Apostle Paul teaches, do everything without murmuring."

In recent years, Francis has dedicated particular attention to continued liturgical reforms in the church, arguing that they are necessary for the embrace of the reforms of the council, which he has said are "irreversible." More recently, some of the pope's top advisers have expressed concern that some of the resistance to the Francis papacy is rooted in resistance to Vatican II.

During the Mass, the pope once more reiterated his support for the reforms of Vatican II.

"How timely the council remains!" he said. "It helps us reject the temptation to enclose ourselves within the confines of our own comforts and convictions."

As the pope concluded his homily, he again issued a clarion call for church unity.

"You who desire that we be a united flock, save us from the forms of polarization that are the devil's handiwork," he said. "And we, your church, with Peter and like Peter, now say to you: 'Lord, you know everything; you know that we love you.' "