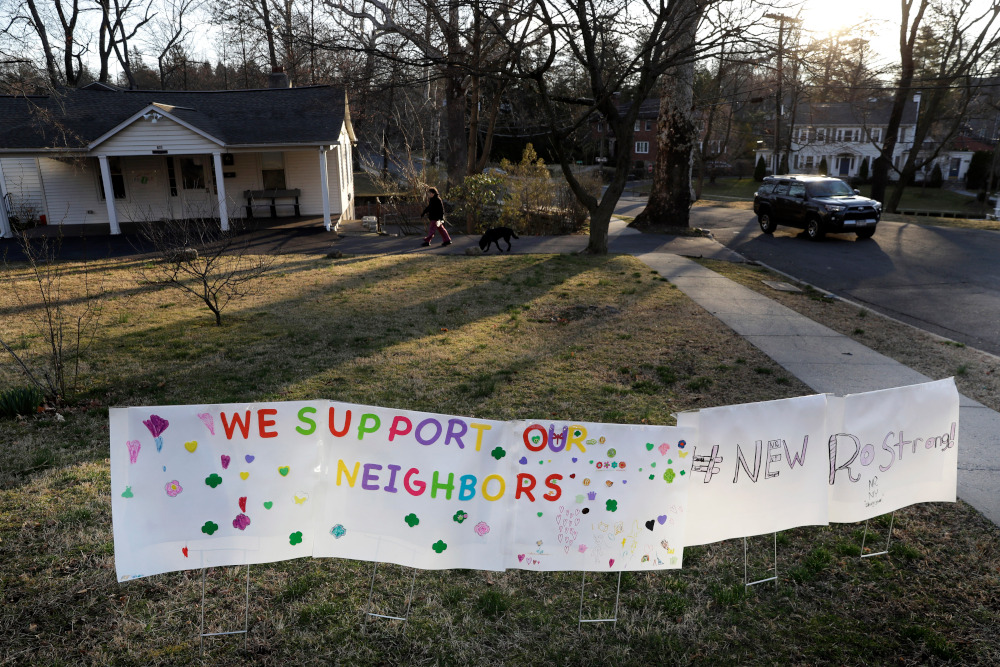 A sign showing support for residents is displayed on a lawn in New Rochelle, N.Y., Wednesday, March 11, 2020. State officials are shuttering several schools and houses of worship for two weeks in the New York City suburb and sending in the National Guard to help with what appears to be the nation's biggest cluster of coronavirus cases, Gov. Andrew Cuomo said Tuesday. (AP/Seth Wenig)

The coronavirus pandemic has prompted multiple religious faiths to change or cancel services as houses of worship try to help contain the disease. But some church leaders are also tackling another task: communicating a message that elevates both faith and science.

That goal is particularly challenging in a time of sharp political polarization, as partisan scuffles over religion's influence on policymaking can caricature Christians as skeptical of science. For pastors across Christian denominations, however, rising public anxiety over coronavirus only reinforces the importance of believing in God while heeding the advice of public health experts.

"Science is a wonderful arena of truth and understanding truth. It is an amazing tool that can help human flourishing. We just believe it can't address all truth that exists," said D.J. Jenkins, pastor at Anthology Church in Studio City, Calif.

Jenkins, who got his undergraduate degree in biology, acknowledged that "for a lot of folks, it's probably pretty strange to see" a Christian or other devout person "asking for divine help — and then also trusting in science and health professionals and doctors. But it's not strange for me."

While past natural disasters have found a few high-profile Christians asserting a link to specific divine punishment, the coronavirus outbreak has generated little if any of that religious rhetoric. Instead, churches are rising to the moment with a mixture of spiritual aid and practical counsel that presents its own challenges, beyond the political tensions kicked up by the virus.

Scott Sauls, senior pastor at Nashville's Christ Presbyterian Church, said he's discussing ways to "move toward the pain rather than away from it," acting on his faith's edict to love one's neighbor amid rising anxiety.

But that goal is complicated by the social distancing that's been recommended as a best practice to slow down the disease, Sauls noted, since "Christians' responsibility is to, No. 1, not send the irresponsible, unloving message" of downplaying the virus' risk. He said conversations about how best to help have so far focused on assisting the high-risk elderly and health care workers overtaxed by the crisis.

National Association of Evangelicals President Walter Kim said his guidance to denominations is prioritizing the advice of the Centers for Disease Control and other experts, because "the sense of reassurance we want to give is coupled with prudence in seeking out the best information."

Citing the high religiosity among early scientific pioneers such as Isaac Newton, Kim said that although friction between faith and science has occurred in the past, "the scientific community and people of faith really should serve as collaborators."

Religious institutions from coast to coast have upended their service schedules to prevent close contact that could spread coronavirus, with Kentucky's governor encouraging churches to cancel their services this week. While not every church in the state plans to fully close, pastors such as Steve Weaver, of Farmdale Baptist Church in Frankfort, Ky., said they are keenly aware of both scientific and faith considerations.

"We want to take seriously the health challenges that experts are describing and their prescriptions to address those challenges," Weaver said by email. "However, we have to balance that by our responsibility to continue our regular expressions of worshiping and gathering, which I believe is commanded of us as Christians."

In Washington state's King County, where the outbreak has claimed more than two dozen victims, pastors are already dealing with the spiritual struggles wrought by the pandemic.

"There's a lot of fear right now, so we have an opportunity to be bearers of hope and peace," said Andrew Fouché, pastor of Sunset Community Church in Renton, Wash. Fouché added that he resists "pat answers" about prayer providing complete protection.

Aaron Monts, pastor at United Church Seattle, said he's seen "a tension of fear and faith" among congregants who are not yet directly affected by the virus but facing growing isolation. Last Sunday, March 8, Monts said, his church suggested a way for believers to blend worship with doctors' advice: reciting a 20-second prayer while washing their hands.

"We taught, let's do something a little more intentional with this space" than the increasingly popular advice to sing 20 seconds of "Happy Birthday," Monts said.

Yet the act of prayer itself often proves fodder for political division over faith and science, and the government's response to coronavirus is no exception. When Vice President Mike Pence tweeted a photo of a group prayer before a meeting of the Trump administration's virus response task force that he leads, one commentator's online pushback met with condemnation from prominent Republicans who accused progressives of maligning religion.

In fact, Pence's photo sparked a complex reaction from Christians who said prayer is valuable but not the sole solution to a crisis, whether personal or pandemic.

Chris Green, professor of theology at Southeastern University, said he has seen "magical thinking" about the power of prayer among both conservative and liberal Christians, but "that is a minority, very clearly a quieter voice in the conversation."

"Overwhelmingly, I think the groups I work with would say, pray and work" to solve problems, said Green, who's also a teaching pastor at Sanctuary Church in Tulsa.

Katelyn Beaty, a former veteran editor at Christianity Today, described the Pence photo as a politicized bid to court conservative Christian support. But she separated that critical response from her view of prayer itself — as not incompatible with respect for scientific fact.

A majority of Americans pray at least daily, according to a 2014 poll by the nonpartisan Pew Research Center. Referring to Muslim and Jewish neighbors who communicate with God, Beaty said that she "would never ... assume that because they pray, they're also distrustful of science."

Beaty added that "the 'divide' between faith and science is much more about culture wars and the politicization of everything in our common life than it is about what people think and believe."

Underscoring that point, Pew polling also has found that while 59% of Americans view religion and science as often in conflict, only 30% said science conflicts with their own personal beliefs.

James Dew Jr., president of New Orleans Baptist Theological Seminary, acknowledged what he called the "warfare" theory of faith's relationship to science but offered an alternate view of religion and science as "dialogue partners."

"We need God's grace more than ever before," said Dew, who writes extensively on theology and philosophy. "We also need our medical community to do its best work right now."