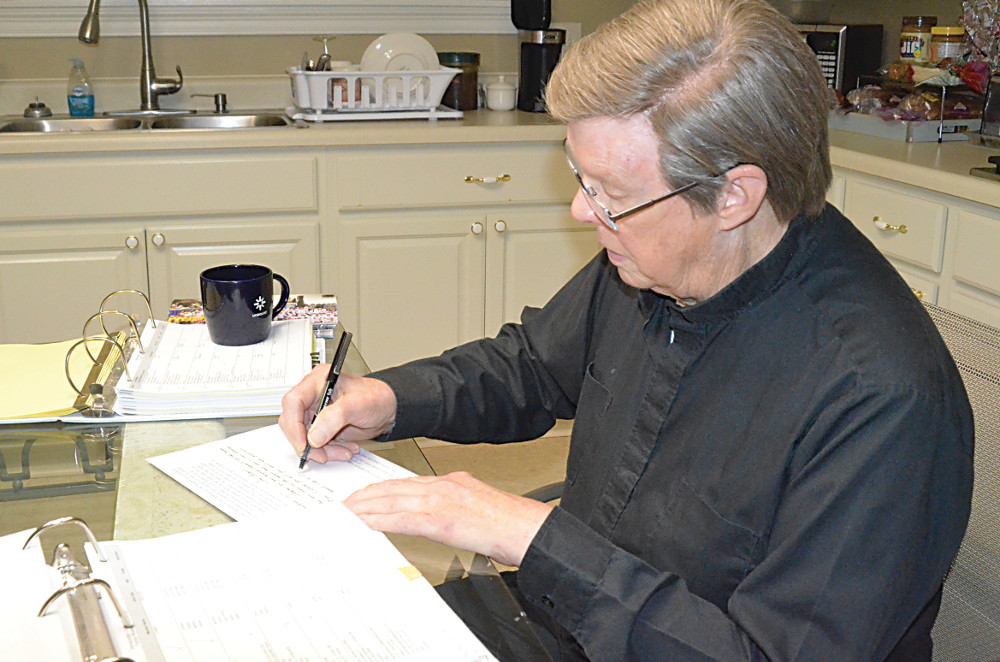 Shortly after Labor Day, when the only signs of Christmas are at retail outlets and drug stores, Fr. Frank Uter takes a seat at his kitchen table of his rectory and pens personal tidings in Christmas cards to his parishioners.

He sends cards to 4,100 families at Immaculate Conception Church in Denham Springs and its mission church, Sacred Heart in Livingston.

He has carried out this tradition for decades, across the Diocese of Baton Rouge at the various church parishes where he has served. During that time, he has likely used many gallons of ink.

Evangelization has always been part of the church's ministry since the ascension of our Lord," Uter told The Catholic Commentator, newspaper of the Diocese of Baton Rouge. "But our focus primarily was within the parish and her ministries and religious education. But Pope Paul VI reminded us how important it is to evangelize, to reach out beyond the pews."

Uter attended workshops on the encyclical, and in 1976 he was assigned his first pastorate, at St. Mary of False River Church in New Roads.

The St. Mary staff had Christmas cards printed up and were going to print labels and send them out.

"I got a few parishioners together that were active in the parish and a few friends and I said, 'Would you mind one Sunday if we took the parish roll and instead of putting labels on all these Christmas cards if we wrote out the envelopes in our own hand? It seems to me if parishioners are getting cards from the parish it needs to be with a personally written envelope and not like some mass production,'" said Uter. "And they said 'Sure.' "

After two years, Uter felt he needed to do more.

"I said, 'I don't get to talk to every parishioner all the time. If I wrote a little personal greeting it would be a way of reaching out to everyone in the parish," he said.

He continued the tradition at each parish he was assigned to. When he came to Immaculate Conception, he faced the challenges of making contact with so many families.

"I knew I was not seeing every family on Sunday, much less talking to every family personally. That's where the spirit of evangelization really kicked in," he said.

Uter has rules regarding his Christmas card project. Beginning in September he does not take a day off and in the evenings and on Sunday afternoons if he doesn't have meetings, he will go to the (rectory) kitchen table and write cards so it doesn't become like an office project.

"Each year the secretaries give me a book with every family with the names and ages and nicknames, everything that can help me to make the card personal and ages of the children," the priest said.

If he sees a "zero" by a child's name he writes a note to the parents that he hopes their first Christmas with their child is especially graced. He also keeps cards in alphabetical order, so that in case someone dies or becomes sick he can rewrite the card to their families; he often adds a thank-you for people's ministry.

The flood of 2016 was a challenging year with so many people displaced. The church had received the cards shortly before the flood and they were destroyed. Uter took a picture of them in a wheel barrel as they were being carted away. Determined to have some sense of normalcy, the cards were soon reprinted and Uter kept up the tradition.

"I wrote a whole lot of cards saying, 'We hope you will soon be home for Christmas.' "

Once Uter finishes writing the cards, a couple of people will take a few boxes of cards home and seal the cards, which also contain a copy of the Christmas Mass schedule, and bring them back to the church. Parishioner Beverly Jackson will get long trays from the post office and she and volunteers separate the cards by zip codes before taking them to the post office.

Uter said the cards are put in the mail Dec. 17, the beginning of the "O" antiphons, the final preparation days for Christmas.

While it occasionally requires discipline to write in the cards, Uter said doing so helps him realize how blessed he is.

"To be surrounded by so many good families — and just writing for a few hours I feel really good," he said.

[Debbie Shelley is assistant editor of The Catholic Commentator, newspaper of the Diocese of Baton Rouge.]