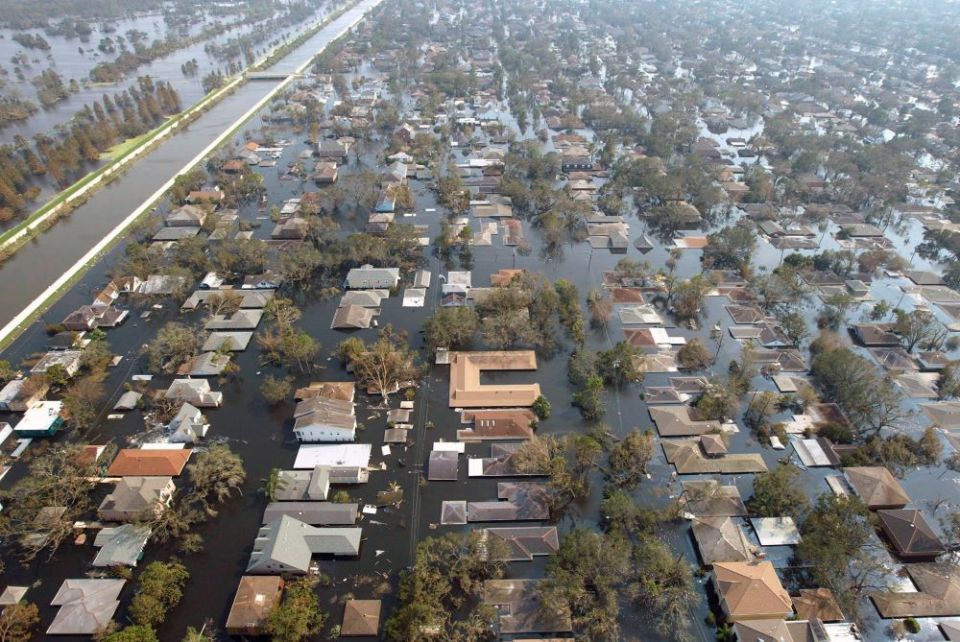 Houses in New Orleans are seen under water Sept. 5, 2005, after Hurricane Katrina swept through Louisiana, Mississippi and Alabama. (CNS/Reuters/Allen Fredrickson)

Hurricane Ida hit the Louisiana and Mississippi Gulf coast on Aug. 31 — 16 years to the day after Hurricane Katrina slammed the coast. Ida was not as devastating as Katrina, but still horrible. This time the new levees in New Orleans held and people evacuated ahead of time. But the power is out over a huge area. People will be sweltering without air conditioning for up to a month. Homes and businesses were lost. All terrible.

But disasters like Ida and Katrina also have a positive effect. They bring out the best in us. I always say that people are better in hurricanes.

In disasters, we remember our neighbors. We also establish new bonds with people who are geographically far away but suddenly very much on our minds.

Sixteen years ago, my parish in Maryland had an intimate experience of that kind of bonding. The memory has never really left us. Yesterday my former deacon, Eugene, who is now retired with his wife Marge, to Florida, called me as Ida was moving north. He asked, "Do you remember the job you gave me 16 years ago today?" No, I said.

It came back to me.

Like everyone, in the wake of Katrina we were moved with the desire to do something. That morning I had heard a priest interviewed on NPR, Josephite Fr. Richard Wagner, a pastor in Raine, Louisiana. He was providing housing to storm refugees who had driven up from New Orleans. I called him and asked what he needed.

He said the people had brought nothing. They needed simple things like a change of underwear and a toothbrush or a towel and a washcloth. We decided the quickest and easiest way to get him that stuff was to send Walmart gift cards so people could buy what they needed. Eventually we sent something like $20,000 worth of gift cards to various parishes. We bought so many gift cards we had to call corporate headquarters in Arkansas to get them shipped because our local store ran out. Wagner said he was the most popular man in Louisiana for a time. And the people in my Maryland parish were thrilled to be able to do something practical and immediate. The help went directly to people in need.

Eventually, through Wagner, we got in touch with other parishes, including the people of Our Mother of Mercy parish in Pass Christian, Mississippi. We decided to build a relationship with them. Over the course of a year, we would make nearly a dozen mission trips to Mississippi, to aid the small, largely Black Josephite parish on the Gulf Coast. It was one of the highlights of my life. Everyone involved had the same reaction.

On one of my early trips to Mississippi I became aware of how the Holy Spirit worked through that mission to teach us. Like everyone in Pass Christian, I was eating in the giant tent set up by Mississippi Emergency Management Agency (MEMA) to feed the townspeople and volunteers. It was the only place to eat in the area. Power was out to whole town and there was no clean water except in that tent, which could accommodate perhaps 700 people.

I remember sitting at lunch with the pastor, then 84-year-old Josephite Fr. Bartholomew Endslow, who has since died. We were discussing what to do about the old convent building that had been underwater in the 35-foot storm surge. It had served as their food pantry. Everything was ruined, still wet weeks after the storm. Bart said we need to save it. I said, "Let it go, Bart."

A man at the next table, a contractor from Arkansas heard me. He came over and said he could tear down the building and haul it away. After lunch we walked over to look at the convent. He asked $2,500 for the job. I wrote him a check on the spot. The next day the building was torn down and hauled to the giant rubble pile on the edge of town. There was just a bare spot left.

My next trip down to Mississippi, someone asked, "Did you get a permit to tear that building down?" "No," I said, "there was no city hall."

By that time a newly reopened city hall was functioning out of a FEMA trailer. The lady at city hall went to Endslow's parish. She said, "Oh that's alright. We'll fix you right up." She issued a demolition permit for the old convent and stamped it "Approved."

"There," she said. "All legal." That is the way to handle red tape after a hurricane. 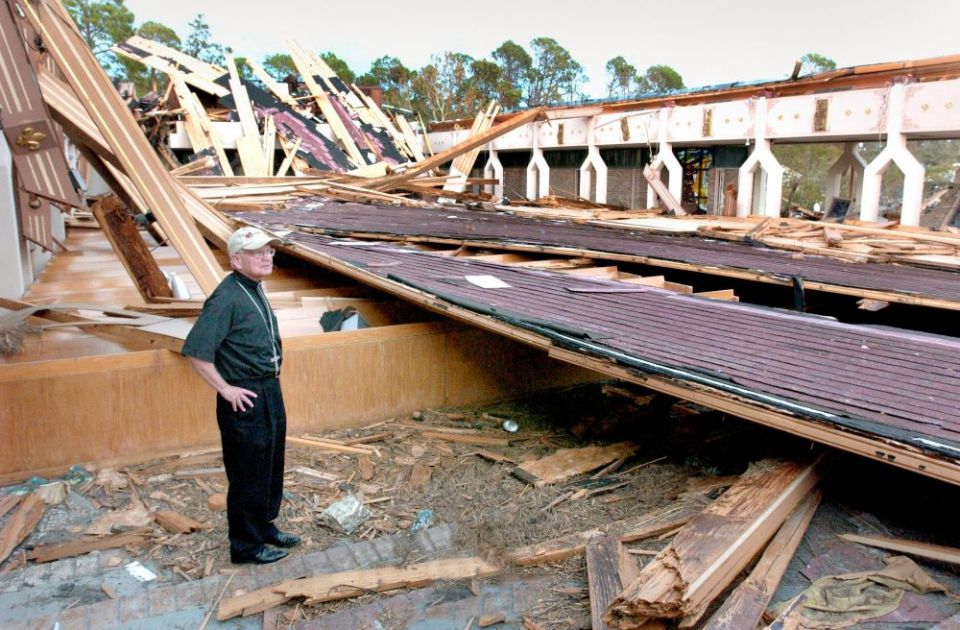 Archbishop Alfred C. Hughes, who was head of the New Orleans Archdiocese at the time, stands amid the rubble of the collapsed roof of Our Lady of Lourdes Church in Slidell, La., after Hurricane Katrina in 2005.(CNS/Clarion Herald/Frank J. Methe)

We returned many times to Mississippi and Louisiana over the next two years. The people there became our friends. On an early trip to Mississippi, I was eating in that same giant MEMA tent. It was filled with people, all talking, and laughing. They were people of every description: Black and white; Latino and Anglo; young and old; rich and poor. There were church groups from many denominations: Catholic, Lutheran, Mormon and evangelical. There even was a large group of prisoners on work release, sent to help in the hurricane relief.

As I stood to leave, I looked about, and it struck me. "This is it," I thought. "This is the banquet of heaven. Everyone is here. This is what it will be like."

Disasters are horrible, but they can have good results. They can bring us together. They can help us find our mission and meaning. They can break down the old barriers and establish new bonds.

I hope that despite all the suffering, Ida can do what Katrina did 16 years ago. I hope Ida brings out the best in us. That will be another image of the kingdom of heaven. Fr. Peter Daly is a retired priest of the Washington Archdiocese and a lawyer. After 31 years of parish service, he now works with Catholic Charities.

Column | Hurricane Katrina brought out the best in us

Earthbeat Weekly: What's one thing we can all do about climate change? Talk about it