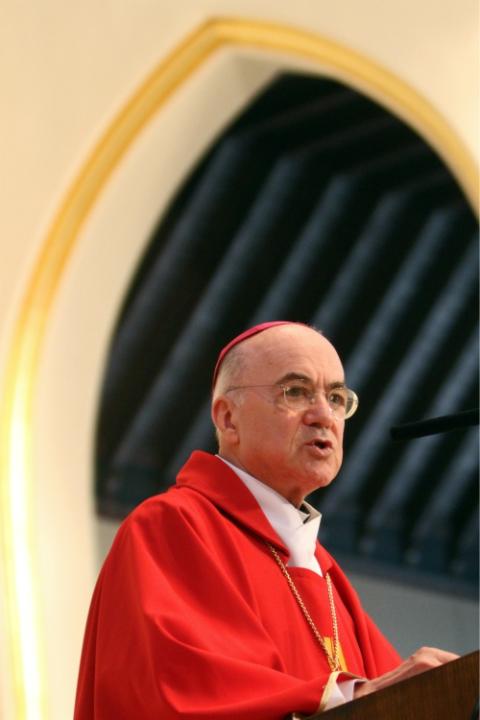 When Steven Rafferty's wife, Kathy, noticed Archbishop Carlo Maria Viganò's recent letter to Donald Trump posted on the official Facebook page of their parish, she left a comment questioning the integrity of both the sender and recipient of the letter.

The letter was quickly deleted, but it was a breaking point for the Raffertys, who attend Immaculate Conception in Cottonwood, Arizona.

In that letter, sent June 6, Viganó, the former papal nuncio to the U.S, claimed that he and Trump were united in a cosmic battle between the forces of good and evil.

For the Raffertys, seeing their parish share the writing of an Italian archbishop who had previously called for Pope Francis' resignation, left them "disinclined to participate in a parish that promotes this kind of stuff," Steven Rafferty told NCR.

"I'm usually pretty quiet," he said. "This is the first time I've taken a stand. The Viganò thing is just unreal and out of control."

Although Rafferty tries to stay informed about church news, many fellow parishioners rely on what they hear from the parish to shape their understanding of church life on both a local and global level, he said. Viganò "does not deserve our time," Rafferty said. "He's undermining church authority and the pope, and it disturbs me very much."

Rafferty's story is not an outlier. Across the country, priests have used their homilies, bulletins and parish social media to promote Viganò, who since issuing an 11-page testimonial manifesto against Francis in August 2018 has been heralded by many right-wing Catholics as leading the resistance to Francis' papacy.

When, on June 10, Trump tweeted out Viganò's letter (originally published on the right-wing website LifeSiteNews) to his 82 million followers, along with his praise of the archbishop, he helped to dramatically increase its reach, along with Viganò's profile.

While many mainstream Catholics have dismissed the former Vatican diplomat, who has written of Masonic conspiracy theories and fueled suspicions of the deep state, some Catholic observers worry about a normalizing effect when parish priests promote radicalized individuals such as Viganò to everyday Catholics in the pews who are unattuned to inside church baseball.

In many such cases, the priests in question use their homilies and parish resources to promote a fusion of traditionalist theology and conservative political talking points. In the weeks following Viganò's 2018 attack against Francis, many bishops' conferences around the globe issued statements specifically denouncing the former nuncio. The U.S. Conference of Catholic Bishops did not.

In fact, more than two dozen U.S. bishops — Bishop Thomas Olmsted of Phoenix, Bishop Thomas Paprocki of Springfield, Illinois, and the now-deceased Bishop Robert Morlino of Madison, Wisconsin, among them — issued statements of support for Viganò at the time, which has only helped legitimize and amplify his continued efforts and those of priests who now pass along such perspectives to their flock.

Cathleen Kaveny, a professor of law and theology at Boston College, told NCR that the intended effect of Viganò's recent letter to Trump is to continue, in a different language, the culture wars, as evidenced by his use of apocalyptic language.

"For people in the pews, the takeaway is that Trump is opposed to abortion and therefore you have to vote for the Republican," Kaveny said of those who share the letter. "I don't think anyone really expects the apocalypse. I just think they're clearly trying to get people to vote for Trump over [presumptive Democratic nominee Joe] Biden."

According to Massimo Faggioli, a church historian at Villanova University, some church leaders operate under the assumption that "Catholics in the pews are protected from the calumnies and conspiracy theories thanks to a kind of ecclesial herd immunity," and hence, many choose to brush off Viganò as irrelevant.

"The fact is that only a small percentage of Catholics have been immunized by reading about Viganò since his already very eventful days in the Vatican, then as a nuncio to the U.S., and finally when he went rogue in August 2018," Faggioli told NCR.

Recent homilies and bulletin notes posted online by Fr. Ronald Antinarelli, pastor of Our Lady of Victory in Rochester, New York, lament what he describes as the lack of courage of bishops willing to stand up to secular authorities. Yet for him there is one praiseworthy exception: Viganò. 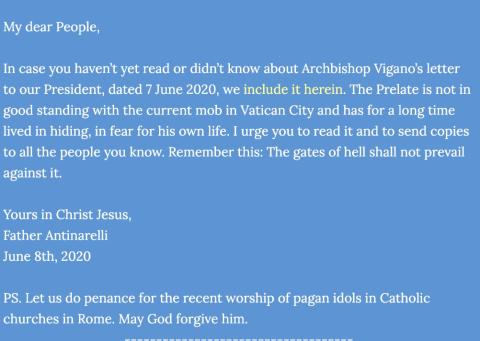 A screenshot of Fr. Ronald Antinarelli's June 8 post on the website of Our Lady of Victory Parish in Rochester, New York

"The Prelate is not in good standing with the current mob in Vatican City and has for a long time lived in hiding, in fear for his own life," he wrote on the parish website's homepage on June 8, along with a link to the letter. "I urge you to read it and to send copies to all the people you know. Remember this: The gates of hell shall not prevail against it."

Antinarelli did not respond to NCR's request for comment; however, a spokesman for Rochester Bishop Salvatore Matano issued a statement saying the priest did not act with permission of the bishop.

"Father Antinarelli acted independently and with no consultation with the Bishop," the spokesman wrote in an email to NCR. "In these very troubled times, we unite with and support our Holy Father, Pope Francis, the Vicar of Christ and Supreme Shepherd, in praying for peace and unity while expressing our profound gratitude to His Holiness for his service to all people."

Antinarelli's June 8 post has since disappeared from Our Lady of Victory's homepage.

Fr. Richard Heilman, Wisconsin state chaplain for the Knights of Columbus, often uses his "teaching blog" RomanCatholicMan.com, to comment on the latest political and ecclesial happenings. On June 6, he shared a copy of the letter, which he said was sent by Viganò's translator.

"This letter is monumental as it calls out the 'Invisible Enemy' controlling a minority who have laid siege of our country — I could not agree more!!" Heilman wrote.

Heilman serves as pastor of St. Mary of Pine Bluff outside Madison, Wisconsin, the same parish where Fr. John Zuhlsdorf, a popular traditionalist priest blogger, is listed on staff.

Bishop Donald Hying of Madison, Wisconsin, did not respond to NCR's request for comment, and Heilman declined an interview.

"+Viganó's claim about a #DeepChurch is all too real," he wrote on Twitter on June 9. "Still, there is a great cause for Hope! The Church thrived despite Satan's twisting of Judas and it will thrive again despite the errors of our times."

At St. Joseph the Worker Catholic Church in Tyler, Texas, Fr. Joseph Valentine included the Viganò letter in the parish bulletin on June 14, along with a passage from an interview from a witness of the Marian apparition of Fatima warning that the U.S. church and its bishops will be overcome by communism.

In some respects, Valentine is only following the example of his own bishop, Joseph Strickland, who in the wake of Viganò's initial 2018 letter against Francis, issued his own letter less than 24 hours after the attack was published. Strickland said that he found Viganò to be credible and asked his priests to read his letter in all Sunday Masses that week in August 2018.

Fr. Bob Bonnot, a retired pastor and executive director of the Association of U.S. Catholic Priests, told NCR that such efforts only serve to fuel the divisions among Catholics.

"Few people would have any sense of who Viganò is, and apart from their own bishop and maybe one or two other prominent bishops or cardinals, they wouldn't be able to tell you very much about the church hierarchy," Bonnot said.

Yet Bonnot warned that if parishioners respect and trust their pastor, they're likely to pay attention to what he says and the individuals or causes he promotes.

Faggioli told NCR that most Catholics are exposed to content such as Viganò's when it receives the endorsement of a local parish priest or through certain kinds of Catholic media. He said he understands the reluctance of the U.S. bishops' conference to speak collectively against Viganò "to avoid the danger to elevate him through an official sanction, a voluntary martyrdom that Viganò and his enablers would certainly welcome."

"On the other hand," said Faggioli, "when pastors are silent against the informal endorsements he receives in Catholic circles and in Catholic media, I think it is a failure in pastoral care — or worse, complicity in the scandal he has created since 2018."