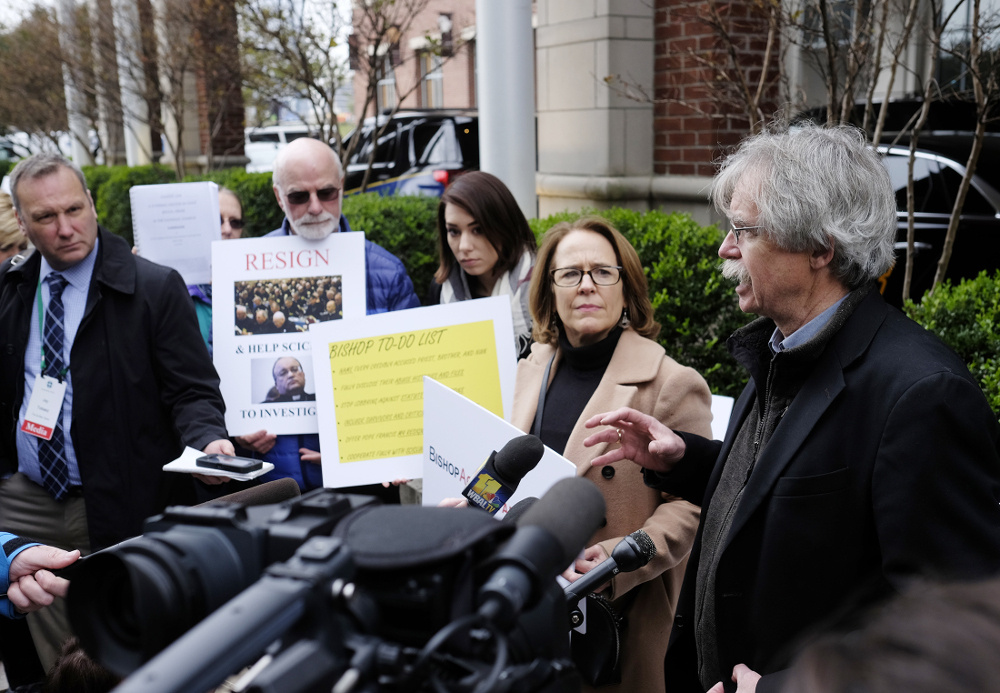 As the U.S. Conference of Catholic Bishops opened a Day of Prayer at the Fall Bishops General Assembly Nov. 12, John McKeon was the first to walk a path along Aliceanna Street outside the Baltimore Marriott Waterfront, just after 9 a.m.

Along with his wife, Karen Greklek, he made the journey from New York to show his concern with a simple poster board sign and matching pins that read "REPENT RESIGN."

"I don't think the church would miss a beat if they all resigned," McKeon said, calling for a collective resignation similar to that of the bishops of Chile. "There are many ways to serve the Lord — they don't have to be a bishop."

Even if Pope Francis does not accept the resignations of every bishop, he said, the gesture would show remorse.

"I'm here because of my faith," said McKeon, a parishioner of St. Mary-Our Lady of Mount Carmel Church in Mount Vernon, New York. "I want the Catholic Church to be what it should be, not what it is."

Leaders from BishopAccountability.org organized a morning news conference, where they and victim-survivors of abuse denounced the Vatican's request for the U.S. bishops to delay any vote on two proposals they were to discuss at the assembly regarding their response to the clergy sex abuse scandals.

The Vatican — via the Congregation for Bishops — asked the U.S. bishops to delay any vote until after a February meeting with the pope and presidents of the bishops' conferences around the world that will focus on addressing clergy abuse. The bishops were informed of the request just as the general meeting was being called to order.

Action "absolutely cannot wait," said Peter Isely, a spokesperson for Ending Clergy Abuse and founding member of the Survivors Network of those Abused by Priests, or SNAP, who was the first to speak at the news conference. "There's no reason to wait. … It's well overdue; it's time to stand up and do something."

Isely, a victim-survivor of abuse in Wisconsin, said the bishops "need to deliver" at their Nov. 12-14 fall general assembly.

"They cannot walk out of this conference without delivering anything," he said.

Isely still considers himself Catholic because he believes there is a possibility that there will be change.

"I don't know what a post-abuse church will look like, but that's one I want to be a part of," he said. "I still do believe out of … the voice of that suffering (by abuse victims and survivors) will come the real spiritual reform of this church."

Anne Barrett Doyle, co-director of BishopAccountability.org, and Terence McKiernan, the organization's president, pointed to Bishop Steven Biegler of Cheyenne, Wyoming, as a good example of an accountable bishop. Biegler strongly supports an ongoing investigation into abuse allegations against retired Cheyenne Bishop Joseph Hart, now 87; some claims date to when the retired prelate headed the diocese (1978-2001).

McKiernan told the Catholic Review, the news outlet of the Baltimore Archdiocese, that releasing the names of accused and continuously updating those lists are steps in the right direction of attaining accountability. The Archdiocese of Baltimore was one of the first in the country to publish such a list in 2002, with updates to the list in the years since.

"We know survivors who can't go into a church," McKiernan said, adding that, as a researcher, he cannot walk away. "This has actually made my faith stronger and more important.

The news conference also heard from Shaun Dougherty, a victim-survivor from the Diocese of Altoona-Johnstown, Pennsylvania. It was Dougherty's first time protesting outside the bishops' assembly. He said throughout his entire adult life, some members of the conference covered up clergy sexual abuse.

One of nine children and raised in a "very, very" Catholic household, Dougherty said he stopped practicing his faith as a teenager as a direct result of the abuse he encountered.

"I wholeheartedly struggle with faith," he said. "If they (bishops) want me to believe in God, they should probably do something to show me that they believe in God."

Dougherty last encountered clergy sexual abuse in 1983 but said "the mental torment and torture has lasted every day since that time."

His family knows about the abuse, and most have since left the Catholic Church. He still has two brothers and a sister who actively practice the Catholic faith, and he acknowledged that the personal choice lies with the individual.

"The Catholic faithful and the Catholic hierarchy — in order to get me to go back (to the church) — would have to act the way they taught me to act in Catholic school," Dougherty said. "Until then, I don't believe in anything."

Fewer than 10 people participated in the protests outside the conference hotel on the first day of the fall meeting.

Some protests of and demonstrations in support of the general assembly began over the weekend. A group of priests, seminarians and lay faithful walked nearly 50 miles from Emmitsburg to the Basilica of the National Shrine of the Assumption of the Blessed Virgin Mary in Baltimore Nov. 9-11 in penance and prayer.

Just before those pilgrims participated in 4:30 p.m. Mass Nov. 11, a paper was taped to the door of the basilica listing "5 Theses" by a group of the same name. They called for full transparency, survivors' voices, simple living, women in church leadership and praying for a reformed church.

Members also placed the theses in the collection basket with two pennies — their "two cents" — attached. Liz McCloskey, one of the leaders of 5 Theses, said the pennies paralleled the day's reading from the Gospel of Mark.

"The Gospel for the day is the widow's mite," McCloskey told Catholic News Service. "This is a drop in the bucket. This is a huge institution that's been around for 2,000 years and is slow to change. 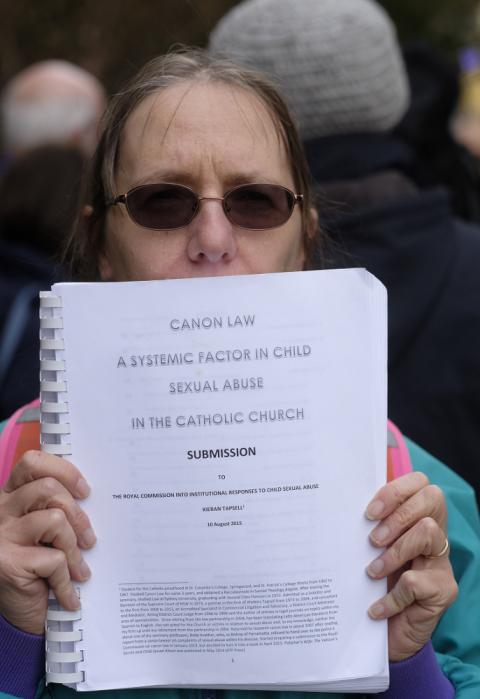 A protester holds a document Nov. 12 outside the hotel where bishops gather for a day of prayer and reflection in Baltimore. (CNS/Rick Musacchio, Tennessee Register)

"There is a feeling of powerlessness or not influencing the church, yet Jesus said those two cents are of value," she said. "My hope is that this is a contribution that's valued and is heard."

As a 5 p.m. Mass for the bishops began inside the hotel, about 40 protesters gathered outside.

Among them were the Women of the New Testament, a group from St. Ignatius in Baltimore that formed after the release of the Pennsylvania grand jury report.

"When (the report) came out, we figured we had to do something," said Marian D'Anna, a member of the group.

Anne Haddad, a leader of the Women of the New Testament, said St. Ignatius has been inclusive since she became a parishioner in 1994, and that women have been encouraged to be active in the church.

Haddad said they support the survivors of clergy sexual abuse, but they especially want to bring focus to their larger goal of allowing the ordination of women.

"We believe that it's absolutely ludicrous to not ordain women," Haddad said, adding the group believes women should be able to attain that level of scholarship and authority. "I, and many other women, will leave the church (if there is no change)."

Ordaining women would be a show of total equality, not just for the U.S. church, but for the church throughout the world, she added.

Elizabeth Brown traveled from her parish, St. Pius X in Bowie in the neighboring Archdiocese of Washington, to voice her desire for transparency among the bishops and more power for the laity in positions of power.

"I'm a practicing Catholic who wants to see the church address this and come out better," Brown said. "They've made a start, but they have not done enough to fully address the problem."

The vigil, organized by SNAP, included speeches from victim-survivors. The first names and last initials of some of those related to the clergy sexual abuse crisis who committed suicide or died from overdoses were read.

Nearly 30 protesters then walked in a circle, each holding a flashlight to shine light on a photograph of a victim.

Rosenthal is a staff writer at the Catholic Review, the news website and magazine of the Archdiocese of Baltimore. Dennis Sadowski of Catholic News Service contributed to this article.