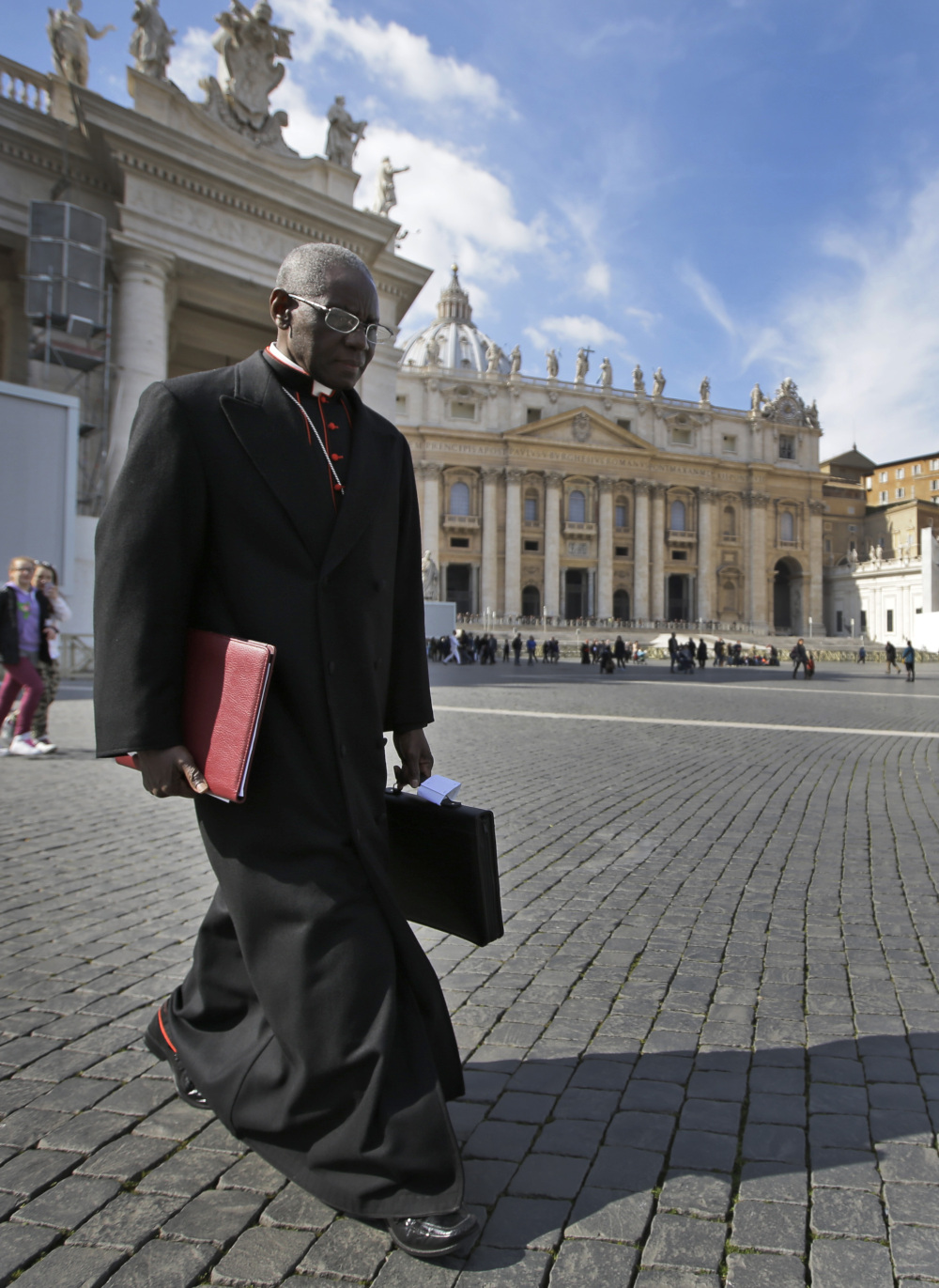 In this Monday, March 4, 2013 file photo, Cardinal Robert Sarah, of Guinea, walks in St. Peter's Square after attending a cardinals' meeting, at the Vatican. Retired Pope Benedict XVI wrote the book, "From the Depths of Our Hearts: Priesthood, Celibacy and the Crisis of the Catholic Church," along with his fellow conservative, Guinean Cardinal Robert Sarah, who heads the Vatican's liturgy office and has been a quiet critic of Francis. (AP/Andrew Medichini, File)

A Vatican cardinal at the center of a storm over a book about celibacy and the Catholic priesthood is denouncing the "brutality" of criticism directed at him and his collaborator, Emeritus Pope Benedict XVI.

In an interview with Italian daily newspaper Il Foglio published Saturday, Cardinal Robert Sarah doubled down on his argument in the book, "From the Depths of Our Hearts," that the Catholic priesthood is incompatible with marriage.

"If you weaken the law of celibacy, you open a breach, a wound in the mystery of the church," Sarah told the newspaper.

Sarah, who heads the Vatican's liturgical office, insisted on the sacramental link between the priesthood and celibacy, even though the Catholic Church has for centuries had married priests in its Eastern Rites as well as in the ranks of Anglican and other Protestant converts.

The book's publication earlier this month sparked furious debate, given that Pope Francis is currently weighing whether to allow married priests in the Amazon to counter a priest shortage there.

Benedict's involvement appeared to be a clear effort to influence his successor's decision and called into question Benedict's promise to live "hidden from the world" after he retired in 2013.

The controversy prompted Sarah to announce that future editions of the book would list Benedict as a contributor, rather than co-author. The Italian version of the book, which came out this week, has on its cover "Robert Sarah with Joseph Ratzinger/Benedict XVI."

Sarah has insisted he acted in good faith and denied allegations that he manipulated the 92-year-old Benedict into participating in a frontal attack on Francis. The cardinal tweeted amid the initial criticism that he had visited the retired pope and "there is no misunderstanding between us."

Sarah, a Guinean prelate who is a hero to the church's conservative and traditionalist wing, has insisted he remains obedient to Francis. But the two have clashed repeatedly, and the Vatican under the progressive Francis has found itself in the unusual position of issuing public corrections of Sarah's positions.

The Holy See, for example, intervened in 2016 after Sarah told a London liturgical conference that it was "very important" for the church to return "as soon as possible" to its old practice of the priest celebrating Mass facing east, with his back to the faithful.

The Vatican press office insisted Sarah's call was taken out of context by the media.

A year later, Francis publicly reprimanded Sarah for misinterpreting a new instruction giving bishops' conferences the right to translate Mass missals. Sarah had already sent his interpretation off to a French journal for publication.

Sarah is due to offer his resignation to Francis in June when he turns 75, the mandatory retirement age for Catholic bishops.