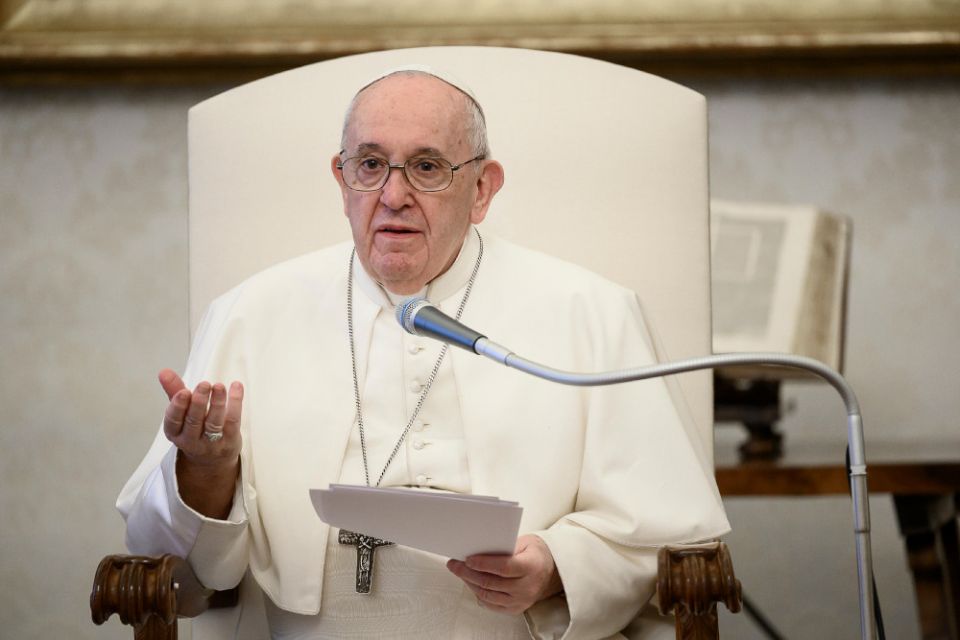 Pope Francis speaks during his weekly general audience in the library of the Apostolic Palace at the Vatican June 17, 2020. During the audience, the pope said that true believers do not condemn people for their sins or shortcomings but intercede on their behalf with God through prayer. (CNS photo/Vatican Media)

Vatican City — True believers do not condemn people for their sins or shortcomings but intercede on their behalf with God through prayer, Pope Francis said.

Just as Moses implored God's mercy for his people when they sinned, Christians also must act as intermediaries because even "the worst sinners, the wickedest people, the most corrupt leaders — they are children of God," the pope said June 17 during his weekly general audience.

"Think of Moses, the intercessor," he said. "And when we want to condemn someone and we become angry inside — to get angry is good; it can be healthy, but to condemn does no good — let us intercede for him or her; it will help us so much."

The pope continued his series of talks on prayer and reflected on Moses' prayer to God who was angered at the people of Israel after they made and worshipped a golden calf.

When God first called him, Moses was "in human terms, a 'failure'" and often doubted himself and his calling, the pope said.

"This happens to us, too: when we have doubts, how can we pray?" he asked. "It is not easy for us to pray. And it is because of (Moses') weakness, as well as his strength, that we are impressed."

Despite his failings, the pope continued, Moses carries on the mission entrusted to him while never ceasing "to maintain close bonds of solidarity with his people, especially in the hour of temptation and sin. He was always attached to his people."

"Despite his privileged status, Moses never ceased to belong to that multitude of the poor in spirit who live by trusting in God," the pope said. "He is a man of his people."

The pope said that Moses' attachment to his people is an example of "the greatness of pastors" who, far from being "authoritarian and despotic," never forget their flock and are merciful when they sin or give in to temptation.

When imploring God's mercy, he added, Moses "does not sell out his people to advance his career," but instead, intercedes for them and becomes a bridge between God and the people of Israel.

Quick Reads | Christians called to intercede for, not condemn, others, pope says