by The Associated Press
Quick Reads
Coronavirus
This article appears in the Coronavirus feature series. View the full series. 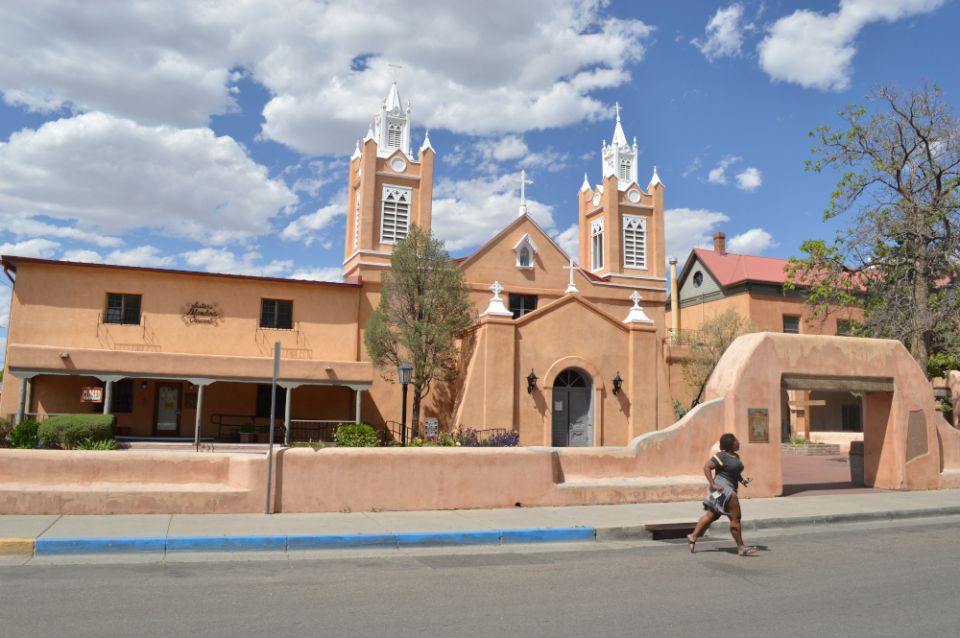 In this photo taken Monday, April 27, 2020, a woman walks pass the historic San Felipe de Neri Church in Albuquerque, N.M., as the church and nearby Old Town shops remain close under a state health order to stop the spread of COVID-19. (AP/Russell Contreras)

Albuquerque, N.M. — New Mexico's largest Catholic diocese has filed a complaint against the U.S. Small Business Administration over its inability to apply for federal aid meant to help businesses affected by the coronavirus outbreak.

The Archdiocese of Santa Fe claims the low-interest loan applications that entities must complete state those businesses involved in bankruptcy proceedings will not be approved. The archdiocese filed for bankruptcy in 2018 in the wake of clergy sex abuse lawsuits that began decades earlier.

The archdiocese said it's struggling to make payroll since parishes haven't been able to gather collections during Mass since Gov. Michelle Lujan Grisham issued a public health order prohibiting gatherings. Church officials said most of their revenue comes from collections, especially during Holy Week and Easter Sunday.

Archdiocese spokeswoman Celine Radigan said in a statement that the pandemic and its unknown trajectory is having a significant effect on the organization's mission to "safeguard the sanctity of life and provide pastoral care and critical resources" to more than 90 parishes, 226 missions and 16 Catholic schools.

Without access to the low-interest loans and federal aid, the archdiocese says it may be forced to furlough essential employees.

Still, Archbishop John C. Wester was telling parishioners to "stay the course" and heed the advice of medical and public health experts.

Like lawsuits filed elsewhere around the country, the archdiocese claims the Small Business Administration overstepped its authority in barring companies in Chapter 11 from participating in the loan program.

The agency said in an interim rule that providing the payroll loans to debtors in bankruptcy would present an "unacceptably high risk."