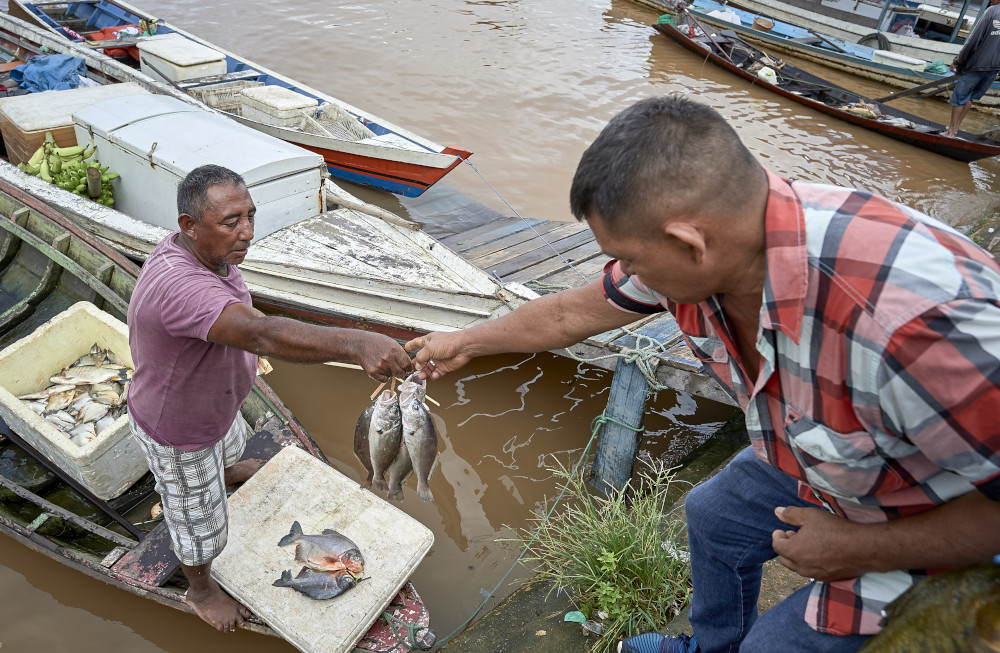 A fisher sells part of his catch at the dock in Santarem, a city alongside the Amazon River in Brazil's northern Para state. (CNS/Paul Jeffrey)

For more than three decades, Juscelina Silva Batista's life has followed the rise and fall of the Amazon River.

During the rainy season, she canoes practically to the door of her simple wooden house, skirting a raft that holds potted plants and a few chickens, and ducking under the long pods hanging from tamarind trees.

With floodwaters lapping practically at the threshold of her house, Batista, 54, snags ripe tamarind and other fruit to sell at the market in Santarem, a city of more than 300,000 people about 20 minutes away, across a channel of the river.

Her husband, Cantidio Benicio Rego, 69, catches fish for them to eat. For the past 30 years, he has taken tourists on boat rides along the river and around the lake near their house, watching for birds and wildlife.

The water recedes during the dry season, leaving a layer of rich sediment around the house, where Batista plants cabbages, peppers, beans, corn and other vegetables. She harvests some for her family and sells the rest in Santarem.

"It's peaceful here," she said of the home where she raised four children, who have given her six grandchildren. "I can leave the house open. It can be difficult at times, but I'm used to it."

But change is roiling the water around Santarem. The city already has a large port where riverboats call with passengers, and freighters load soy and corn from the country's agricultural heartland. Plans are underway for another port facility in the part of the river where the family lives.

In recent months, neighbors sold out and abandoned their land. Someone came to Batista's door, offering to buy her property, which they planned to flip to the company that will build the port facility. It was her last chance to sell, they told her.

She turned them away.

That was risky, though. Like many small-scale farmers and fishers throughout the Amazon, Batista does not have official title to her property, just a paper saying she lives there. City government officials have refused to issue a title, she said. They tell her it's too late – the road to the place where the port facility is to be built is already being paved.

The economic boom that began in Latin America in the early 2000s is transforming the Amazon basin. Infrastructure projects such as highways, dams, river ports and navigation systems that had languished in earlier decades are back on the drawing board or under construction.

Proponents say the projects are needed to provide transportation for people and products, as well as energy. Critics say the schemes often are riddled with corruption and bypass the region's poorest people. 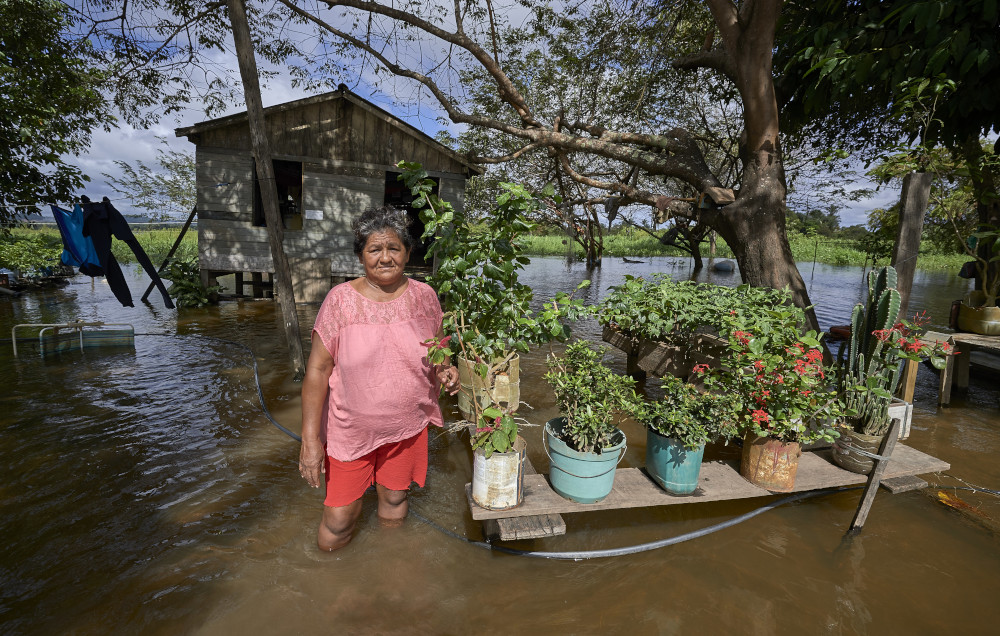 Juscelina Silva Batista, 54, stands in front of her house in the middle of the Amazon River near Santarem, Brazil. She is one of the last holdouts in an area where land is being bought up to build a large port facility. (CNS/Paul Jeffrey)

Problems related to those projects were a key topic during Catholic Church consultations around the region in preparation for the Synod of Bishops for the Amazon, to be held at the Vatican in October.

During the second half of 2018, the Pan-Amazonian Church Network, which was officially launched by Pope Francis in 2014, organized assemblies in which people discussed issues they would like the bishops to consider at the synod.

According to the synod working document published in June, participants in those sessions mentioned the hydroelectric dams, highways and railroads, forests being razed for industrial-scale farming, mining and oil production as infrastructure projects and industries that affect their communities.

"The threat to life comes from economic and political interests of dominant sectors of society, especially extractive industries, often in complicity, or with the permissiveness, of local or national governments and traditional authorities (of the indigenous communities themselves)," the document says.

"Those who pursue such interests appear to be disconnected from or indifferent to the cries of the poor and the earth," it says, citing Pope Francis' 2015 encyclical, "Laudato Si', on Care for Our Common Home."

The impacts of large-scale projects often are greater than anticipated.

When the Peruvian government decided to pave a dirt road from the foot of the Andes Mountains to the country's Amazonian border with Brazil, creating a paved route across South America from the Atlantic to the Pacific Ocean, the route was mostly forest.

Less than 10 years after the project was completed in 2010, forest has been stripped away for farms and cattle pasture. The same had already happened on the Brazilian side of the border, where the road was paved earlier.

In Brazil, the east-west Trans-Amazon Highway splits the region in two, and a new north-south highway will divide it further. Deforestation always follows road construction and paving, and scientists who study the Amazon fear the rates of forest clearing will increase in coming years.

In some cases, construction projects have spurred corruption in the region. A huge scandal involving bribes and kickbacks from several Brazilian construction groups has snared top government officials in at least a dozen countries in Latin America and Africa.

Company executives are in prison in Brazil, while nearly all of Peru's former presidents are jailed or facing criminal corruption charges. Former Peruvian President Alan Garcia committed suicide in April as police arrived to search his home and arrest him in connection with the case.

The paving of the Interoceanic Highway in Peru was popular among local residents, who can now make the trip from Puerto Maldonado, the Amazonian city that Pope Francis visited in January 2018, to the Andean city of Cusco in less than 10 hours. Before the road was paved, the trip could take weeks during the rainy season.

Other transportation projects are meeting greater resistance. A plan to dredge parts of the Amazon River and three of its main tributaries in Peru has drawn criticism from indigenous communities along the route.

Villagers travel up and down the river in dugout canoes or small wooden boats to fish or take goods to market. When a larger, faster vessel passes, the wake sometimes swamps smaller boats.

In April, in the community of Barrio Florido near Iquitos, Peru, two brothers, ages 6 and 12, left their house early on a Sunday morning to catch fish for the family.

When they did not return home, their mother went to look for them. She found their small canoe floating upside down at the mouth of the creek that passes through the community, where villagers often fish.

It took two days to recover the boys' bodies from underneath barges docked downstream at a refinery owned by the state-own oil company. Everyone in the village attended the funeral as the boys were buried in the small cemetery at the edge of the community.

But theirs were not the first deaths. While they kept watch on the riverbank, waiting for the boys' bodies to be found, villagers recalled 13 other people who had drowned in the same place, probably from backwash caused by a boat with a powerful motor as it passed by.

"The danger has been imminent since (boats have been using) larger motors," said Sister Nancy Rocca, a Peruvian member of the Missionary Sisters of the Sacred Heart of Jesus.

Many accidents go unreported, she said, and in many cases, the victims' bodies are never found, which is a double tragedy for the families.

"Not being able to say goodbye, not being able to mourn them, not having a (grave) where they can visit them and tell them they have not forgotten them is very hard," she said.

Far downstream, near Santarem, Batista and Rego also do not expect to see any benefits from the new port facility, if it is built.

Rego fears the construction will destroy the channels and islands of vegetation where he ferries tourists to watch birds. Batista worries that pollution from the port will contaminate her vegetables, or that she will have to leave her house and move to the city.

If that happens, she said, she won't be able to grow her own food. She will have to buy everything. Life will be more expensive, noisier, more crowded.

"We're fighting for our lives, our lands, our plants," she said.

But they are afraid their voices will be ignored.

"We're fighting for the welfare of all," Rego added. "But big money speaks louder."