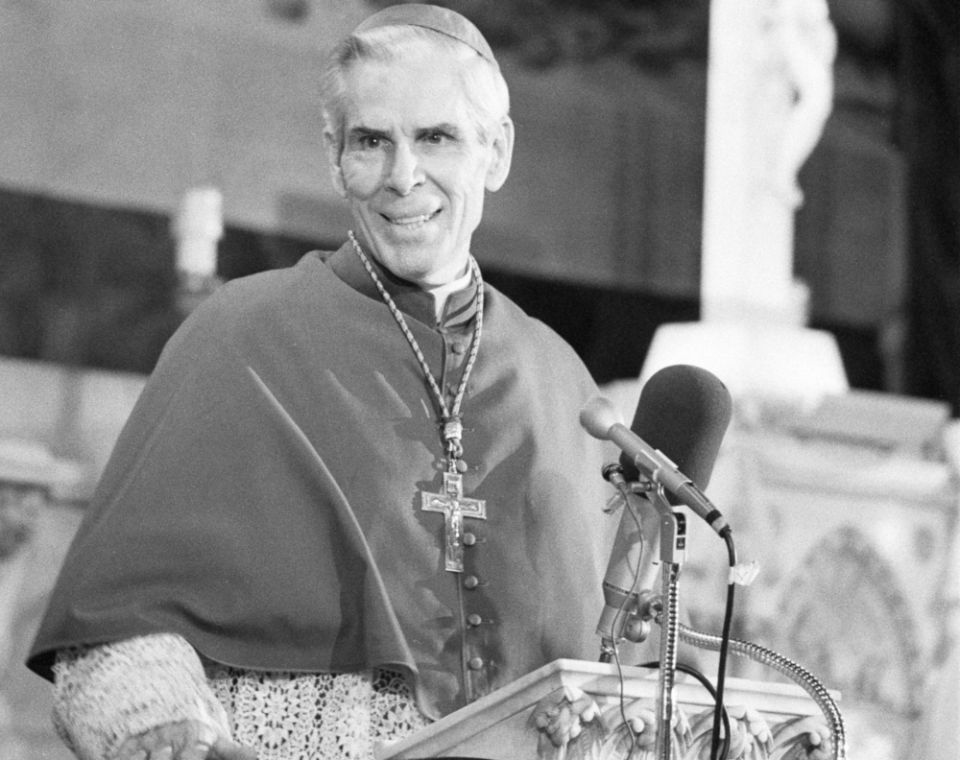 This April 13, 1979 file photo, Bishop Fulton Sheen, known for his many television appearances, appears before parishioners on Good Friday at New York's St. Agnes Roman Catholic Church. The Catholic diocese of Rochester, N.Y., confirms it made the request for further investigations that prompted the Vatican to take the rare step of delaying Sheen’s journey to sainthood. Pope Francis said last month that Sheen’s beatification had been approved and would take place on Dec. 21, 2019 in Peoria, where he was ordained in 1919. The Peoria diocese announced Tuesday, Dec. 3 that the Vatican had postponed the ceremony indefinitely. (AP/Dave Pickoff)

New York — The Catholic diocese of Rochester, N.Y., confirms it made the request for further investigations that prompted the Vatican to take the rare step of delaying Archbishop Fulton Sheen’s journey to sainthood.

Sheen, who died in 1979, was best known for his radio and TV preaching. The new controversy is the latest to bedevil his beatification cause, which was stalled by an expensive, years-long legal battle between Sheen’s relatives in Peoria, Illinois, and the New York City archdiocese over his final resting place.

Pope Francis said last month that Sheen’s beatification had been approved and would take place on Dec. 21 in Peoria, where he was ordained in 1919. The Peoria diocese announced Tuesday that the Vatican had postponed the ceremony indefinitely.

On Thursday, the diocese of Rochester, where Sheen was bishop from 1966 to 1969, confirmed it had sought the delay “to allow for further review of his role in priests’ assignments.”

“Other prelates shared these concerns and expressed them,” the diocese said. “There are no complaints against Archbishop Sheen engaging in any personal inappropriate conduct, nor were any insinuations made in this regard.”

The Rochester diocese has declined to elaborate further on its concerns.

An official in the Peoria diocese, Msgr. James Kruse, says those concerns focus on assignments involving a particular former priest in Rochester who was accused of sexual misconduct. Kruse told the Peoria Journal Star that the Peoria diocese thoroughly investigated that case and found no wrongdoing by Sheen.

In a statement, the Peoria diocese said it “remains confident that Archbishop Sheen’s virtuous conduct will only be further demonstrated” by any additional investigations.

In September, the Rochester diocese filed for bankruptcy protection amid a wave of lawsuits over alleged sexual abuse of children, becoming the first of New York State’s eight dioceses to do so. New York passed a law this year giving victims of childhood sex abuse one year to file lawsuits that had previously been barred because the allegations — many dating back to the 1960s and 1970s — were too old.

Sheen was interred under the altar of New York City’s St. Patrick's Cathedral's after his death. His remains were returned to Peoria from New York in June after a court ruled Sheen’s niece could bury him there.

In July, Francis approved a miracle attributed to Sheen, clearing the way for beatification — one step short of sainthood.

It's extremely rare for a beatification or canonization to be canceled after it's been publicized.

In one of the only such cases in recent times, a newly elected Pope Benedict XVI suspended the planned beatification of a French priest in 2005 so the Vatican could investigate allegations of anti-Semitism in his writings.

The process for canonizing that priest, the Fr. Leon Dehon, had begun more than 40 years earlier.

Dehon, who founded the priests of the Sacred Heart of Jesus religious order in 1877, likely would have been beatified had Pope John Paul II lived a few weeks longer.

The ceremony was scheduled for April 24, 2005. John Paul died on April 2 and Benedict was installed as pope April 24, forcing the beatification to be put off. Rather than rescheduling the ceremony, Benedict formed a commission to study his case, effectively putting it on hold, after French bishops complained about anti-Semitism in his writings.