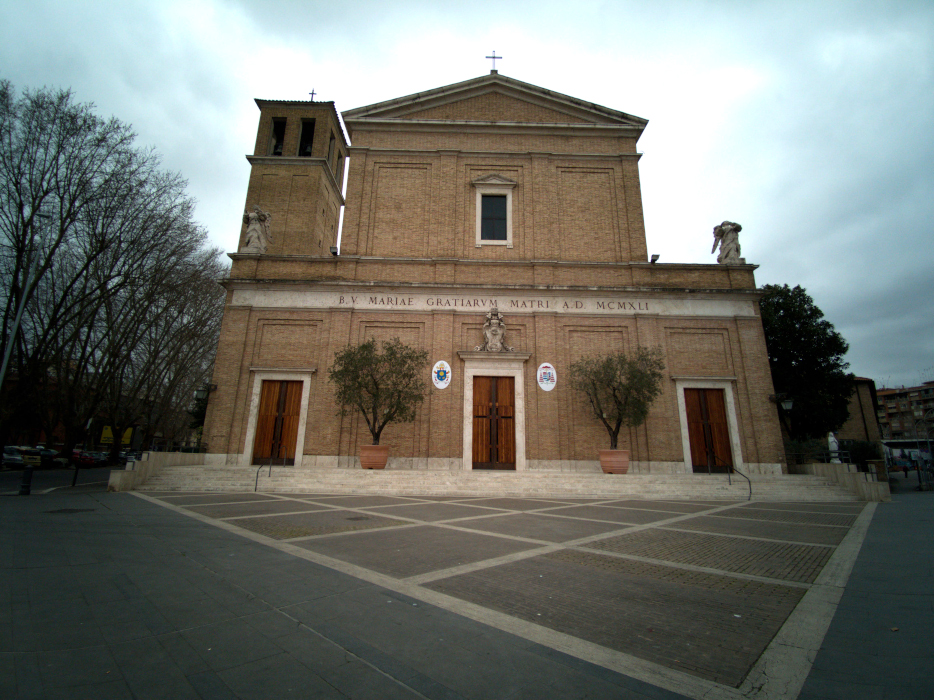 The Church of Santa Maria delle Grazie al Trionfale in Rome, titular church of Cardinal Joseph W. Tobin of Newark, N.J., is seen March 13, 2020. Cardinal Angelo De Donatis, papal vicar of Rome, announced March 12 that all churches would be closed to prevent the spread of the coronavirus. He modified the order the next day, allowing pastors to make the choice to open, but only if people maintain a safe distance from one another. (CNS/Junno Arocho Esteves)

Cardinal Angelo De Donatis, papal vicar of Rome, said he spoke to Pope Francis March 12 before ordering the closure of all churches in Rome because of the coronavirus pandemic; the next day, he said he spoke to the pope again and modified his order.

While Masses with the public present were banned March 9 throughout Italy, churches remained open for personal prayer.

Throughout the week, the Italian government enacted increasingly stricter measures designed to encourage people to stay home and to limit opportunities for people to unknowingly spread the virus to others.

When De Donatis ordered the closure of churches in Rome March 12, he said he recognized what a huge step it was but, given the threat the coronavirus poses for the entire Italian health system, closing the churches was a matter of acting for the common good.

Early March 13, Cardinal Konrad Krajewski, the papal almoner, defied the closure order by opening the doors of his titular church in Rome, Immaculate Mary Church on the Esquiline Hill, an area of the city populated by many migrants, refugees and homeless people.

"In full respect for the security norms, it is my right to assure the poor have a church open," he told Vatican News. "At 8 a.m., I came here and threw open the doors. That way the poor can adore the Blessed Sacrament, which is a consolation for everyone at this time of great difficulty."

A few hours later, De Donatis sent another note to pastors, saying parishes churches — not all churches in the city are official parishes — could reopen as long as measures were taken to ensure no one risked spreading or contracting the virus.

In the end, he said, the closure of the churches risked creating "disorientation and a greater sense of insecurity" among the city's people.

In a letter to the faithful of the diocese, while reaffirming the decision to open some churches, Cardinal De Donatis insisted his earlier decision was not made out of "irrational fear or, worse, a pragmatism lacking Gospel hope."

Instead, he said, he was trying to honor the Gospel by protecting human life.

The coronavirus, he said, "is spreading exponentially. In a few days, the number of people infected doubled, and it is not difficult to predict that in two months we will reach the order of tens of thousands of people in Italy alone."

"The risk of health care structures collapsing is evident," he said. "An elevated number of people could lose their lives, especially the elderly and vulnerable. We can contain this tragic eventuality only by applying measures to stop the contagion and allow the national health service to reorganize."

"What does the Lord ask of us? What is his will, which we must obey? It is to do our best and make our contribution to the health of everyone," the cardinal wrote. "Draw close to one another — not physically, but with solidarity."

The fact that Masses cannot be celebrated publicly at least until April 3 is a "painful sacrifice," the cardinal said, but the "first spiritual requirement" of Catholics is "the charity of care for our brothers and sisters. Unfortunately, going to church is no different than going anywhere: There is a risk of contagion."