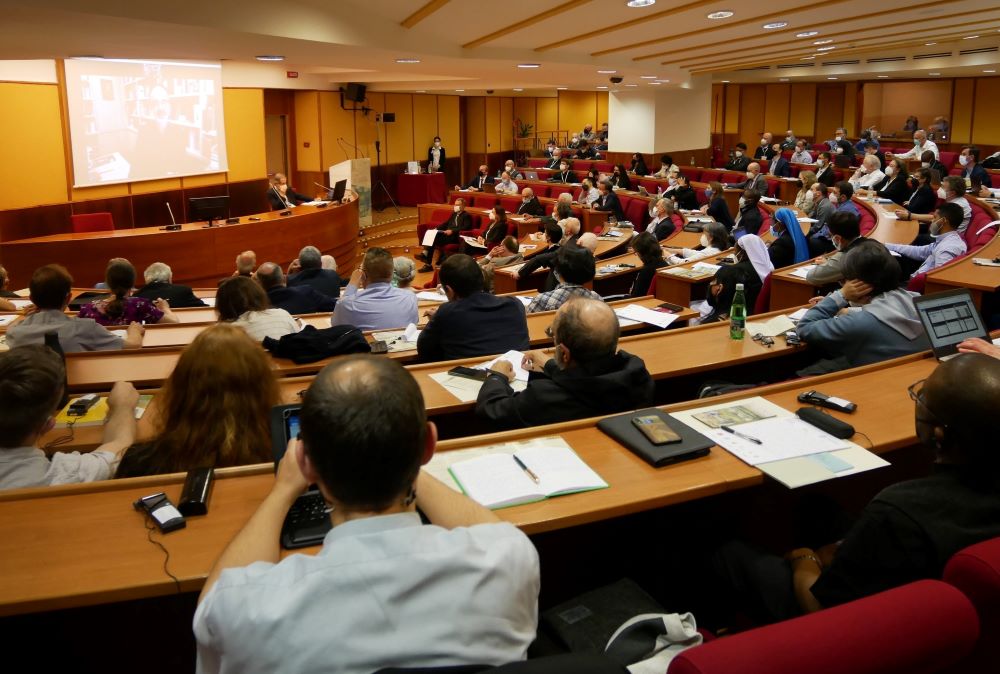 Participants listen at the May 11-15 conference on Amoris Laetitia at Rome's Gregorian University. Pope Francis' landmark 2016 document on marriage and family life, has been widely praised for its call for a greater integration of divorced, remarried and LGBTQ Catholics into church life. But theologians agree the text's implementation on the ground has been mixed. (Courtesy of the Pontifical Gregorian University/Arnaldo Casali)

Although Amoris Laetitia, Pope Francis' landmark 2016 document on marriage and family life, has been widely praised for its call for greater integration of divorced, remarried and LGBTQ Catholics into church life, theologians have long said the text's implementation on the ground has been mixed.

A major May 11-15 conference at Rome's Pontifical Gregorian University, however, brought together nearly 200 bishops, priests, religious women and theologians from 25 countries in Africa, Asia, North America, South America and Europe with an aim of firmly cementing the pope's magisterial teaching on these matters into pastoral practice around the world.

To do that, she noted, "the church must change in order to accompany families," and "an adequate accompaniment of families by the church requires a conversion." 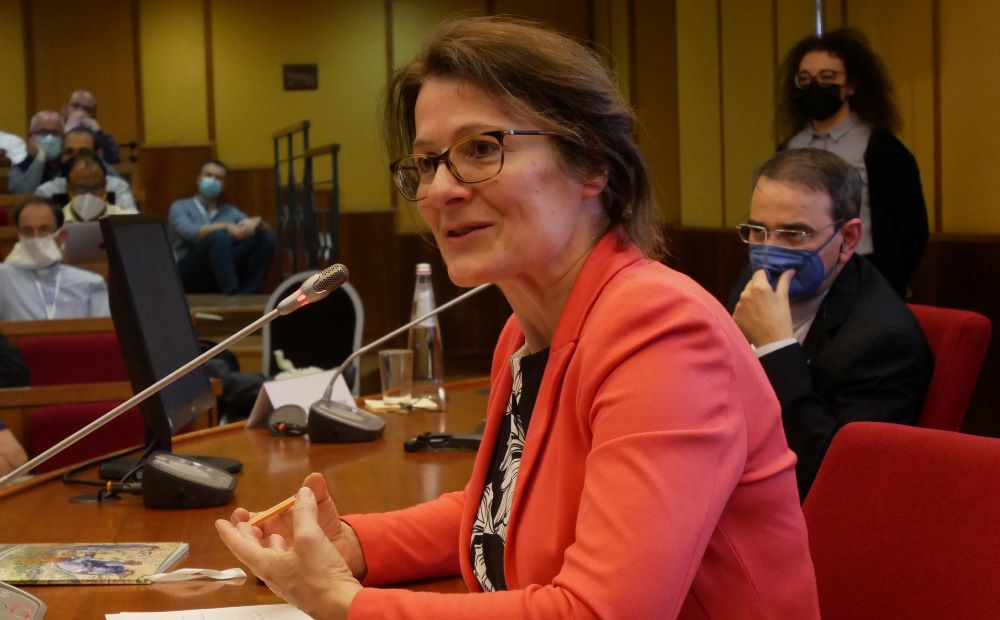 State of efforts around the globe

While Amoris Laetitia provides a cautious opening to Communion to divorced and civilly remarried Catholics and rebalances the role of personal conscience in the practice of moral theology, its publication proved a flashpoint for some conservative Catholics who view the document with suspicion — making that "conversion" difficult at times.

Throughout the four-day conference, representatives from different corners of the globe attested to the modes in which the pope's apostolic exhortation had been implemented, illustrating a stark contrast between countries with episcopal conferences more inclined to support Francis and those skeptical of his reforms.

Jesuit Fr. Eric Marcelo Genilo said that in the Philippines — where, he noted, 80% of the country's 110 million people are Catholic and where Francis enjoys broad support — the bishops' conference released a document declaring that "clergy and laity must act immediately and without delay to extend their welcome to those who feel alienated from the Church because of situations of brokenness."

While he cited cases of clergy denying baptism to children of unmarried or same-sex couples and observed that clericalism is present in some parts of Filipino society, Genilo said that at an institutional level, some committees of the bishops' conference have reviewed marriage preparation programs and that the bishops' conference "affirmed Amoris Laetitia as an authoritative teaching of the church."

Emily Reimer-Barry, associate professor of Christian ethics at the University of San Diego, told NCR that in her assessment, the "implementation of Amoris Laetitia in the U.S.," where some of Pope Francis' most vocal critics reside, "has been uneven."

"The U.S. bishops' document, 'Called to the Joy of Love,' does not reflect on what is groundbreaking in Amoris Laetitia," she observed, adding that "it is shocking that the word 'conscience' only appears once in the document."

She noted that many concrete challenges of family life that the pope describes in Amoris resonate deeply in the U.S. context, and that the church needs episcopal leaders ready to listen to the lived experiences of families that take on many forms. 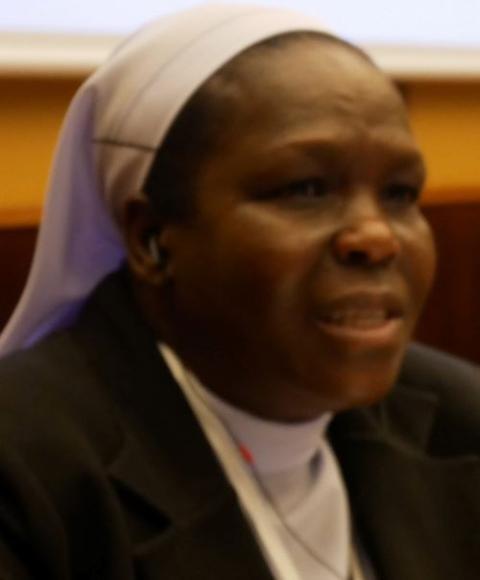 In Kenya, conference speaker Sr. Veronica Rop of the Assumption Sisters of Eldoret, said that, inspired by Amoris, a joint consultation led by Kenya's Conference of Catholic Bishops and the Catholic University of Eastern Africa is underway to better assess the family life needs in that country.

For Rop, the exhortation's emphasis on dialogue has a particular resonance with the church in Africa and "points to the unique African approach of palaver that seeks a common search for an inspired consensus hence personal and communal way of responding to the challenges faced in life."

"Marriage and family life is gradually changing with many families caught between the traditional family system that advocates for ethnic cultural values and practices and modern family that seem to appreciate inter-tribal marriages, Christian and pro-Western beliefs on marriage and family life," she observed.

Elsewhere, in the Global South, Brazilian theologian Maria Clara Bingemer told NCR that the reception of Amoris there "has the same problems as every pontifical document": Most lay Catholics don't read it.

At the moment, she said the bishops' conference and theologians are working to "translate into a more popular language the openness of Amoris Laetitia," particularly when it comes to welcoming remarried people and the LGBTQ community.

While she said the Brazilian church is "still homophobic," many of her LGBTQ students "feel there is an openness to them" and that things are slowly beginning to improve.

The majority of the bishops' conference, she noted, is "with the pope," though she added that "there are some dissident voices, as with the States." 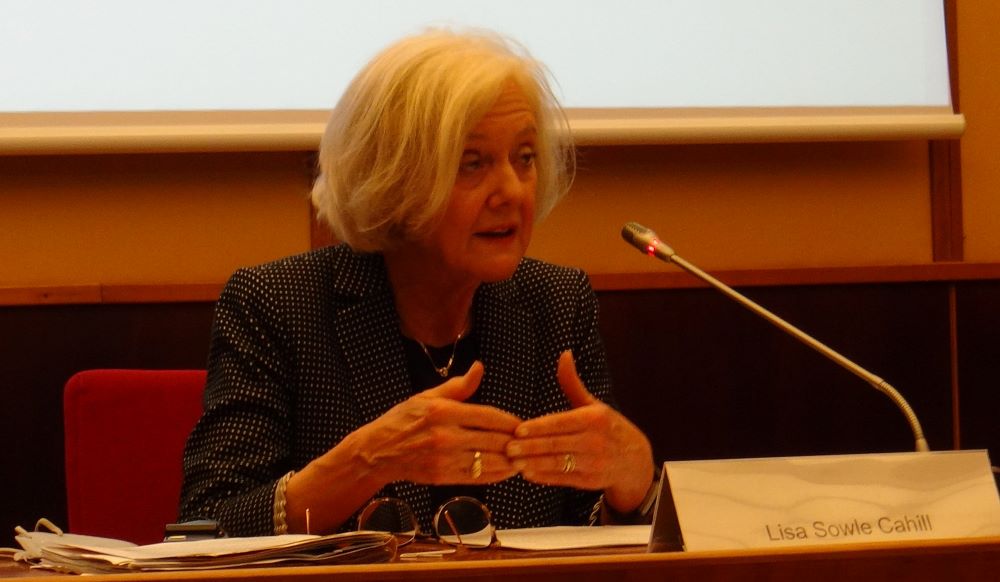 'Many Catholics do not see the grace and possibilities experienced in their own relationships reflected in Catholic Church teaching that deems them 'irregular' and out of bounds.'
—Lisa Sowle Cahill

Boston College theologian Lisa Sowle Cahill noted Francis, both in Amoris and in his own pontifical leadership, has emphasized the importance of listening and learning, especially to Catholics that have been historically marginalized.

Yet despite the example set at the top, changes at the grassroots remain a challenge.

"Many Catholics do not see the grace and possibilities experienced in their own relationships reflected in Catholic Church teaching that deems them 'irregular' and out of bounds," Cahill said.

"Nor do all families and family members find in Catholic teaching or Catholic ministries the compassion, 'mercy' and encouragement they need to survive as a family and nurture children when relationships are painful and require costly sacrifices," she added.

In Amoris, she continued, "Pope Francis warns against applying moral laws 'as if they were stones to throw at people's lives.' ''

"Objective moral truth about specific persons and relationships can be known only by engaging, discerning, judging and acting by or with persons in context," she said.

Relatedly, theologian Stephanie Höllinger of Johannes Gutenberg-University Mainz in Germany said that the language used to describe individuals or relationships as "irregular," "imperfect" or "incomplete" may be problematic and points to a problem with the way catechesis has historically been practiced in the Catholic Church.

"The problem with traditional catechesis," she observed, is that it "does not really want to meet people where they are, and to work in the messy areas where things are imperfect."

Her concerns were echoed by Hélène Bricout of the Catholic Institute of Paris, who said that always speaking of "irregular situations" can lead to social exclusion.

When it comes to the reception of Communion, much discussion focuses on the unworthiness of certain people or parties, which she said "perpetuates the idea that sacraments must be earned."

"We have to admit that in God's eyes, we are all, always, insolvent debtors," Bricout said. 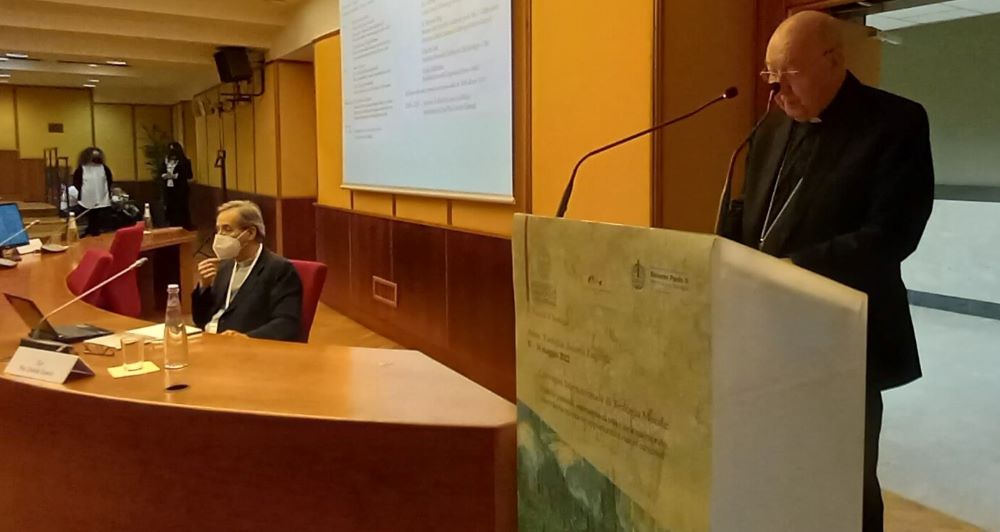 When Amoris Laetitia was published in 2016, it was the final product of two synods on the family (in 2014 and 2015), which, for the first time ever, included broad consultation with Catholic laity around the world.

For that reason, Maltese Cardinal Mario Grech, who now heads the Synod of Bishops, told conference participants that Amoris is a product of the church's "synodal ear."

A crucial theme of both the document and Francis' priorities, he said, is "synodal dialogue," evidenced by the newly revamped synodal process aimed to consult with every member of the Catholic Church and even those outside it.

"We know the value of dialogue based on its failings," said Grech, noting that war demonstrates what happens when dialogue breaks down.

Dialogue, he continued, is linked to evangelization, and when it comes to matters of theological questions, doctrine must contribute to the "evangelizing mission of the church." 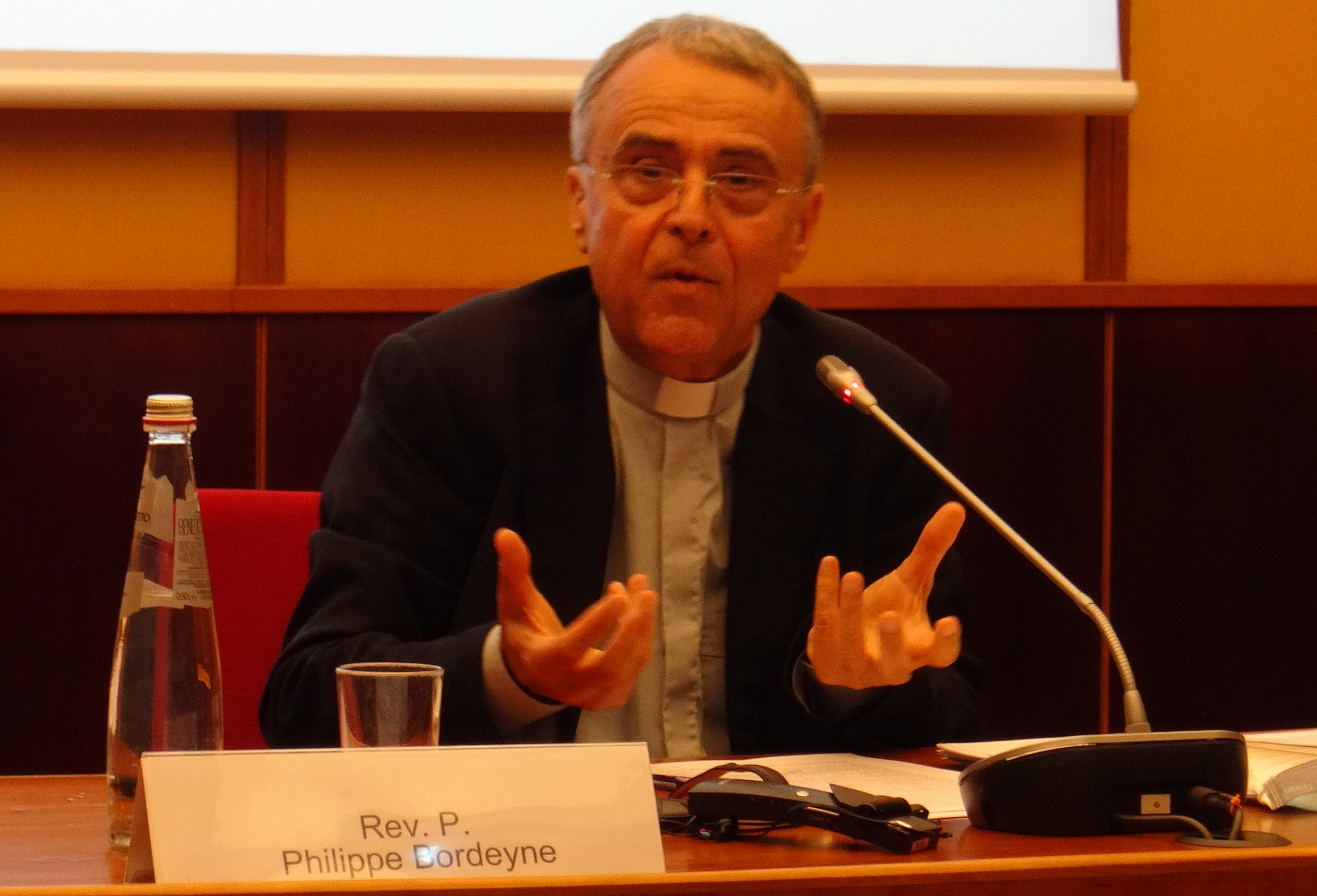 Fr. Philippe Bordeyne, rector of the Catholic Institute of Paris, said that when one reads Amoris, one cannot be untouched or unmoved by the document, as it is a call for the church to encounter society and the family.

Questions of morality, he went on to note, are "a consequence of the encounter with Christ" and the mission of synodality provides the church a chance to "use the chaos" of life to realize that even in the midst of it, "God is capable of giving life."

In his closing remarks, Argentine Jesuit Fr. Miguel Yáñez, a conference organizer, took stock of the recent discussions, which he said had been made possible by a change of eras in church life and governance.

"The conference has shown that Amoris Laetitia has awakened an intellectual effervescence in moral theology that has not been seen for several decades," he said. "Since the Second Vatican Council, we have not experienced a pontifical magisterium that invites us to go further, to progress in the understanding of morality in the current cultural context."

More than five years after the release of Amoris, with its anemic reception in some quarters and enthusiastic embrace in others, Yanez told conference participants much work remains for the document to take root in church life.

He concluded: "The great theologians have taken risks, and even though they suffered incomprehension and were harshly disciplined, they have thus sown new possibilities of understanding the human and of realizing the Kingdom present in history, which calls us to conversion and mission."