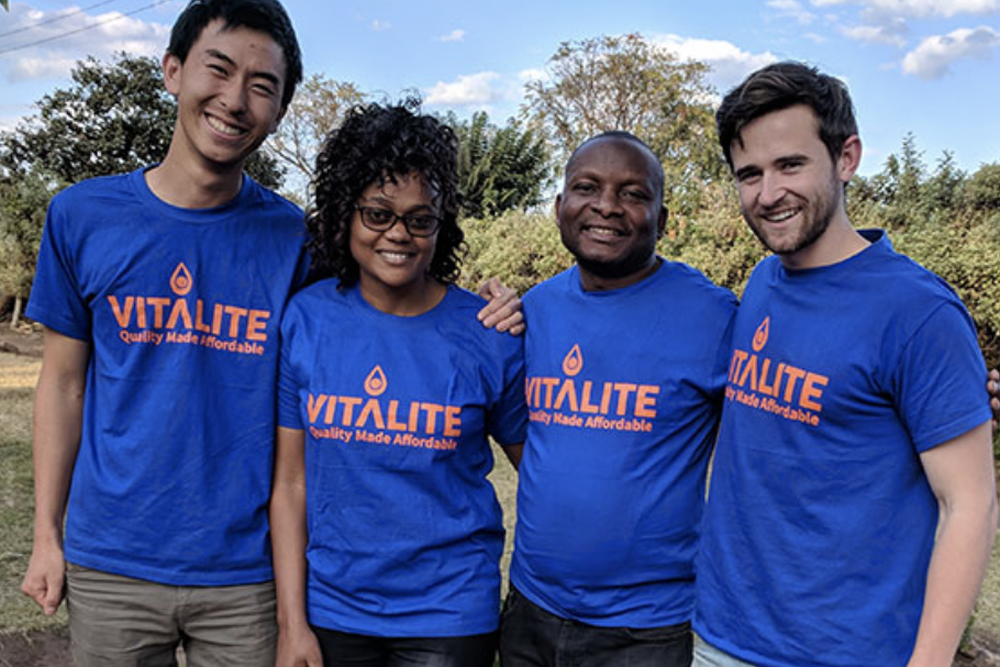 James Wang, left, is pictured during time in the field with Vitalite Zambia, in Lusaka, Zambia. (Courtesy of Miller Center for Social
Entrepreneurship at Santa Clara University)

During the fall semester of his junior year at Jesuit-run Santa Clara University in California, James Wang had a choice: an internship at an engineering firm or a fellowship that's not specifically in his field but where he felt he could make a big difference.

"There are so many different opportunities in the world," Wang said. "If you limit yourself to what you have within college or what you can see in front of you, you really don't have many options to look forward and to create the change you want to see in the world."

He chose the fellowship, working for Vitalite Zambia through The Global Social Benefit Fellowship at Santa Clara University's Miller Center for Social Entrepreneurship.

The fellowship allows 18 juniors from the university to take part in a nine-month research project, including an eight-week field component in the developing world. Fellows are grouped into teams and paired with social enterprise partners of Miller Center's Global Social Benefit Institute. These partners have already identified a problem they need help overcoming.

For Wang, his challenge was to help Vitalite Zambia identify why so many customers were defaulting on their payments and devise solutions to help improve its scalability.

Some of his professors initially questioned his decision, asking him if he was still an engineer. He had always seen himself as an engineer and those questions made him a little nervous. But, he said, he got into engineering to create change in the environment, with the goal of one day helping developing countries have clean and accessible electricity and water.

"I did research. I did internships. But at the end of the day I was like, am I going in the right directions? Am I making a difference?" he said. "I had to tell myself no."

He knew the fellowship was the right way to go.

"They're among the best-prepared job candidates or graduate candidates that anyone can imagine."
—Thane Kreiner, executive director, Miller Center for Social Entrepreneurship

Thane Kreiner, executive director of Miller Center, said a lot of students feel conflicted like Wang because they want to be doing good in the world, but it's not the professional experience people usually think of when looking at internships.

"There's a lot of pressure for them to take classic internships," Kreiner said.

Although it's not the traditional route, he added, students learning to work in a low-resource setting with a team at a real organization is exactly the kind of experience jobs and graduate schools are looking for.

"They're among the best-prepared job candidates or graduate candidates that anyone can imagine," he said.

And, Wang said, his engineering skills were extremely valuable to Vitalite. He was easily able to understand all the technical aspects, helping restructure a portion of training to simplify it for employees. He also helped make the training manual more visual, which, he said, was important because not everyone spoke English.

"It really comes down to the engineering mindset," he said. "That's all about problem-solving and trying to make connections when there aren't any."

The fellowship was created through a $2 million gift to the university from Ann Bowers, widow of Robert Noyce, nicknamed "the Mayor of Silicon Valley" and co-founder of Fairchild Semiconductor and Intel Corporation.

Bowers wanted to create a program that was "a transformative social justice learning experience for high potential undergraduates regardless of their economic background," according to Kreiner.

So, in 2012, Kreiner and Keith Warner, director of Miller Center's education, fellowship, grants and action research activities, set out to do just that.

The fellowship is now in its eighth cohort, having had 121 students from more than 20 majors participate in projects for more than 35 social enterprises in 17 different countries. Some of those fellows have gone on to be valedictorians, received Fulbright awards to continue researching in the developing world, or received jobs with the social enterprise partners of Miller Center's Global Social Benefit Institute. 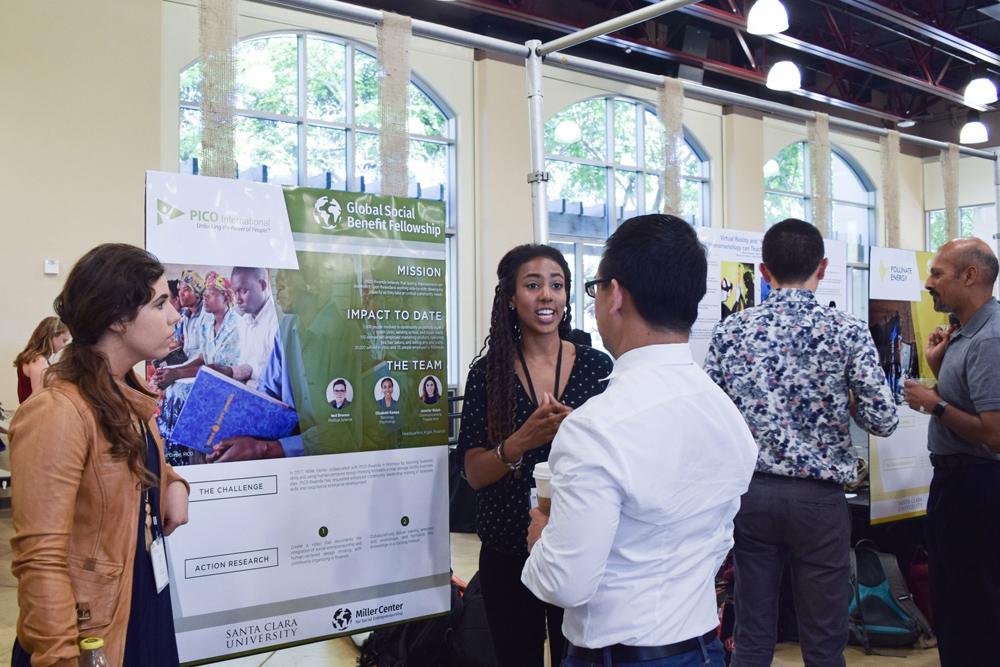 Elizabeth Kamya gives a presentation on the Global Social Benefit Fellowship, and her experience working with PICO-International/Rwanda. (Courtesy of Miller Center for Social Entrepreneurship at Santa Clara University)

The original gift from Bowers will last for about another two cohorts. To continue the program, Kreiner said they are working to raise money for a $10 million endowment, $4 million of which is already raised.

It is Miller Center's way of connecting the academic mission of the university with the values and engagement that are important for a Catholic university that makes this program so unique, Warner said.

"The Ignatian spirituality is about the whole person," Kreiner said. "The fellows are discovering what matters to them emotionally, spiritually, as well as intellectually, and how they bring their talents in each of those different realms together to do something that gives them meaning and purpose in life."

But it's not just about the students. Kreiner said he found that during most internships, the students can be learning a lot but there isn't enough time or ability to allow for the students to make a true impact on the company or the people they're helping.

"Can we do something where the students are adding real value to the social enterprises?" he asked himself when coming up with the project.

Now Kreiner and Warner are hoping this kind of program will expand to other Jesuit universities.

They are currently working with the University of San Carlos in Cebu, in the Philippines. Instead of doing it as a fellowship, this university is planning an entire major, including about 200 students. And rather than flying them all over the world, its partnerships will be with local organizations, all a bus ride away from the university.

But it's those partnerships that are so important to a program like this, Warner said. The connections Miller Center already has to these social enterprises and the amount of time given to the students allow the students to make this kind of real impact.

Even after their courses and fieldwork, their jobs aren't done. A lot of abroad experiences just "drop people off" back at home and never "close the loop," Warner said. Santa Clara students are required to make a consulting-like report that they send to the organizations.

And for some, returning home can result in some of the bigger changes. 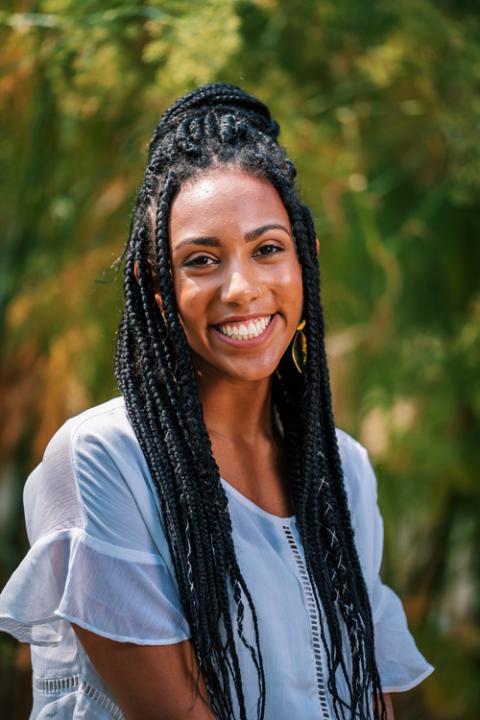 Elizabeth Kamya, a psychology and sociology major, had always thought she wanted to be a therapist working with women and trauma.

During her time with the fellowship she was a project manager for PICO-International/Rwanda.

"But after this project, I fell in love with communities," she said. "There's so much untapped potential in them."

She also found a love for business and project managing. But that didn't come easy.

A lot of her job was listening and asking what the community wanted. About halfway through her fieldwork, everything was running smoothly, which should be great news for a project manager, but Kamya said she got insecure and no longer felted needed in a project she had worked so hard on.

"But then I realized I had a bigger role," she said. She then worked on mediating between Miller Center and PICO.

During one of those times, one person with PICO wanted to go to a coffee shop, but the students had a lot of work and Miller Center wanted the students to focus on that.

Although she wasn't exactly sure why it was so important to this person to go on this small trip, Kamya worked out a schedule including time enough for the coffee shop and work.

Her goal was just to make both groups happy, but it turned out to be even better than imagined. During the trip, an idea for a new entrepreneurship opportunity for PICO was born.

"Now we're trying to grow this PICO coffee idea from that," she said, adding that a continued project is happening with a new cohort of students that will help build business models and look for microfinance loans "to really get this up and running."

When she returned home, she knew she had to include her newfound love for business, project managing and communities into her career.

She's considering getting a master's in social work with an emphasis on strengthening and organizing communities. But whatever her next steps are, she knows her experiences through the fellowship program have helped her understand and connect with the world around her.

"Whatever I do, I want to bring that empathy with me," Kamya said.

A version of this story appeared in the March 22-April 4, 2019 print issue under the headline: Real-world problem-solving.