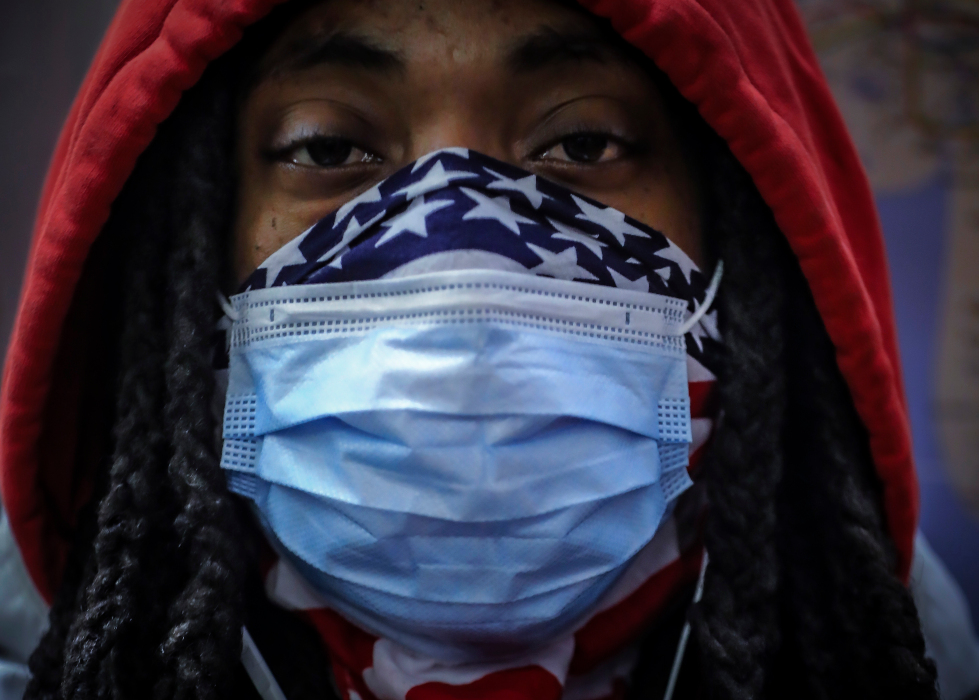 In this April 7, 2020, photo, a subway rider wears a mask and a bandana to protect himself against COVID-19 in New York. As the coronavirus tightened its grip across the country, it is cutting a particularly devastating swath through an already vulnerable population, black Americans. (AP/Bebeto Matthews)

Democratic lawmakers want police departments to be vigilant about any racially biased policing during the coronavirus pandemic, as people in communities of color express fears of being profiled while wearing masks or other face coverings in public.

In a letter sent April 17 to Attorney General William Barr and FBI Director Christopher Wray, Sen. Kamala Harris of California and other Democratic members of the Senate Judiciary Committee urged federal law enforcement agencies to provide anti-bias training and guidance to police officers. The officers may increasingly encounter masked residents as the nation weighs a gradual reopening of the economy in the coming weeks, the senators said.

"With the ongoing public health emergency, it is more important than ever for law enforcement to build trust with communities of color," the senators said in the letter, which was first shared with The Associated Press.

Earlier this month, the Centers for Disease Control and Prevention recommended that people who go out in public wear a surgical mask or a cloth covering their nose and mouth to prevent the spread of the virus. And already, some black men have reported incidents of racial profiling while following the recommendations.

"If communities of color — especially African American communities — feel at risk of disproportionate or selective enforcement, they may avoid seeking help or adopting precautionary measures recommended by the CDC," the letter reads. "This, in turn, could have dire public health consequences."

The toll of COVID-19 on African Americans has been disproportionate, preliminary public health records show. The latest AP analysis of available state and local data shows that nearly one-third of those who have died from COVID-19, the illness caused by the coronavirus, are black.

African Americans are roughly 14% of the population in the areas included in the analysis.

Since the CDC issued its recommendations on April 3, several states, including New York, New Jersey and California, began requiring people to wear masks when riding public transportation, visiting grocery stores and pharmacies, or in other spaces where it is difficult to be socially distant.

Less than one week after the CDC's mask recommendations, two black men in surgical masks recorded themselves being followed by a police officer as they left a Walmart in Wood River, Illinois. In another incident, an African American doctor who wore a mask as he volunteered to test homeless people for COVID-19 was handcuffed and detained by police outside his home in Miami, Florida. 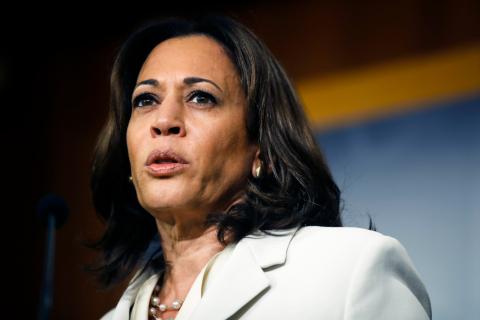 In this Jan. 16, 2020 file photo, Sen. Kamala Harris, D-Calif., talks to reporters about the impeachment trial of President Donald Trump on charges of abuse of power and obstruction of Congress, at the Capitol in Washington. As presumptive Democratic presidential nominee Joe Biden begins the process of choosing a running mate amid the coronavirus crisis, managing the pandemic has become its own version of an audition. For potential picks, lobbying for the job means breaking into the national conversation, positioning themselves as leaders and executing at their day job. (AP/Matt Rourke)

Black men also are reportedly being harassed for not wearing face coverings. A day after the Southeastern Pennsylvania Transportation Authority began requiring customers to wear facial coverings on buses and trains, an African American man without a mask was seen on video being forcibly dragged from a bus by Philadelphia transit officers.

These incidents suggest mask requirements "could expose Black Americans to unfair and dangerous treatment from law enforcement," Harris, a former prosecutor, said in an email to the AP.

"We can't let this become a bigger problem," she said.

Jim Pasco, executive director of the National Fraternal Order of Police, a union of more than 330,000 members, pushed back on the senators' request. He said the vast majority of the nation's police officers already receive anti-bias training.

"In the circumstances we currently find ourselves in, I find it troubling that anyone is asking the nation's already overworked officers to take time out of their work for training, based on a few allegations of improper conduct," Pasco said in a phone interview. "This seems like political opportunism, at the least opportunistic time for the country."

In a statement, an FBI official said the agency's employees receive implicit bias training as part of a basic field training course. "The FBI does not conduct any investigative activity solely on the basis of the race, ethnicity, gender, national origin, religion, disability, sexual orientation, or gender identity of the subject," the official said.

Systemic racism and discrimination in law enforcement isn't a new issue. However, various studies of criminal justice data show that African Americans are more likely than whites to be pulled over by police, and are as much as three times more likely to be searched. They have also been arrested and shot by officers at twice the rate of whites.

In the email, Harris, who is black, said the onus cannot be on black men to ensure that taking precautions against the virus outbreak doesn't also make them vulnerable to biased policing.

"We need to place more responsibility on the system, particularly in this moment," she said. "During this crisis, it is more important than ever for law enforcement to prioritize building relationships of trust with the communities they serve."

The letter to the Justice Department and FBI was also signed by Democratic Sens. Cory Booker of New Jersey, Dick Durbin of Illinois, Ed Markey of Massachusetts, Mazie Hirono of Hawaii and Ben Cardin of Maryland.