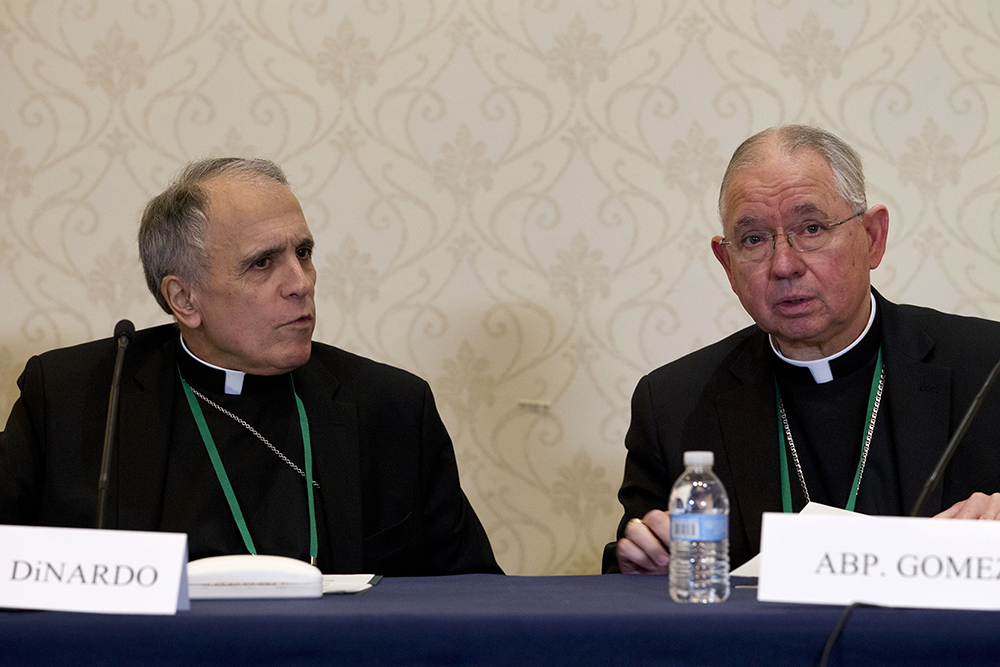 Cardinal Daniel DiNardo, left, of the Archdiocese of Galveston-Houston, and Jose Gomez, archbishop of Los Angeles, speak during a news conference at the United States Conference of Catholic Bishops' 2019 spring meetings in Baltimore, on June 11, 2019. (RNS/AP/Jose Luis Magana)

Global warming is an important issue but not urgent, said the leader of the U.S. Catholic bishops. Abortion, on the other hand, is their preeminent priority.

Cardinal Daniel DiNardo, the outgoing president of the United States Conference of Catholic Bishops who was succeeded by Los Angeles Archbishop José Gomez  at the conclusion of the group's three-day meeting in Baltimore, gave his comments on global warming in response to a question from Religion News Service at a news conference Nov. 11.

At the meeting, the bishops also approved a letter saying that "The threat of abortion remains our preeminent priority because it directly attacks life itself, because it takes place within the sanctuary of the family, and because of the number of lives it destroys."

In their letter, the bishops clearly indicated that they see abortion as the most important issue, although, they added, "We cannot dismiss or ignore other serious threats to human life and dignity such as racism, the environmental crisis, poverty and the death penalty."

The letter will be distributed with the reissuing of their 2015 statement on political responsibility, "Forming Consciences for Faithful Citizenship." The documents are the bishops' attempt to guide the political actions of Catholics, including voting in the 2020 election cycle.

At the meeting, Cardinal Blase Cupich of Chicago attempted to insert into the letter a paragraph from Pope Francis' encyclical "Gaudete et Exsultate."

In the paragraph, the pope criticized the "ideological error" of believing that "the only thing that counts is one particular ethical issue or cause that they themselves defend."

"Our defense of innocent unborn, for example, needs to be clear, firm and passionate," continued the pope. "Equally sacred, however, are the lives of the poor, those already born, the destitute, the abandoned and the underprivileged, the vulnerable infirm and elderly exposed to covert euthanasia, the victims of human trafficking, new forms of slavery, and every form of rejection."

The drafting committee, chaired by Gomez, accepted the "equally sacred" language, but it refused to include the entire 183-word paragraph with its criticism of ideological error. The drafters said they were trying to keep the letter short. Cupich responded that the paragraph expressed the magisterial teaching of Pope Francis in a succinct way.

Arguing for including the entire paragraph, Cupich cited especially the last sentence: "We cannot uphold an ideal of holiness that would ignore injustice in a world where some revel, spend with abandon and live only for the latest consumer goods, even as others look on from afar, living their entire lives in abject poverty."

Speaking in support of the Cupich amendment, Bishop Robert McElroy of San Diego said he believed that the listing of abortion as the "preeminent priority" of the bishops is discordant with the pope's teaching. "The preeminent quote will be used to undermine the point Pope Francis is making in that paragraph," he said.

"Either we should get rid of preeminent, or if we are going to keep preeminent, then at least give the pope a fighting chance with his view and keep that whole paragraph because that is where he articulates his vision of this very controversial question."

The bishops' letter will be used by people to say that abortion "does overcome all the other issues," he argued. "It is not Catholic teaching that abortion is the preeminent issue that we face as a world." 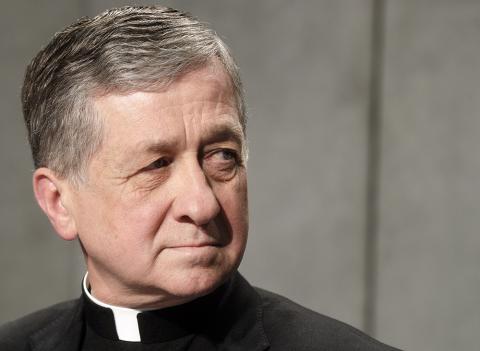 Cardinal Blase Cupich, archbishop of Chicago, attends a news conference ahead of the summit on preventing clergy sex abuse, at the Vatican, on Feb. 18, 2019. (RNS/AP/Gregorio Borgia)

"For us to say that," he said, "is a grave disservice to our people if we are trying to communicate to them what the magisterium teaches."

Archbishop Charles Chaput of Philadelphia responded by denying that "our saying that it (abortion) is preeminent is contrary to the teaching of the pope." Such talk, he said, "sets up an artificial battle between the bishops' conference of the United States and the Holy Father."

"We do support the Holy Father completely. What he said is true," said Chaput. "But it has been very clearly the articulated opinion of the bishops' conference for many years that pro-life is still the preeminent issue. It doesn't mean that the others are not equal in dignity. It's just time in this certain circumstances of our church in the United States."

The bishops applauded Chaput's response and then excluded the pope's paragraph by a vote of 143-69.

By emphasizing the difference between what the pope had said and what the bishops wanted to say, many observers felt that McElroy hurt Cupich's motion. If he had remained silent, the vote might have been closer, but it is doubtful the amendment would have received the votes necessary to pass.

Many would argue that global warming is also a pro-life issue, as it puts millions of lives in future generations at risk. Scientists and the participants at last month's synod of bishops on the Amazon certainly feel that global warming is an urgent priority requiring immediate action, especially in developed countries, in order to avoid worldwide devastation.

The meeting did not even include a report on the Amazon synod, whereas in the past, it was normal for the bishops to hear from those who attended a synod.

The fact that the U.S. bishops do not see climate change as a crisis will be discouraging to environmentalists, young people and Pope Francis. It will also have political consequences in the 2020 election when Democrats argue something must be done about global warming while Republicans brag that President Donald Trump has made the U.S. Supreme Court more pro-life.