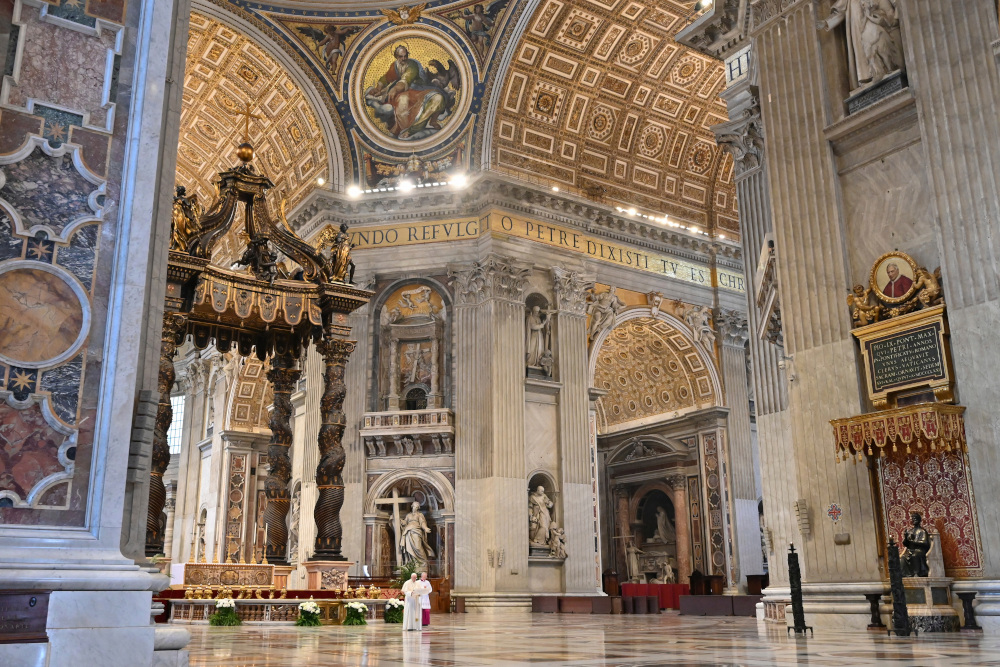 Pope Francis, small white figure at center left, delivers his blessing during Easter Sunday Mass inside an empty St. Peter's Basilica, at the Vatican, Sunday, April 12, 2020. Pope Francis and Christians around the world marked a solitary Easter Sunday, forced to celebrate the most joyful day in the liturgical calendar amid the sorrowful reminders of the devastation wrought by the coronavirus pandemic. The new coronavirus causes mild or moderate symptoms for most people, but for some, especially older adults and people with existing health problems, it can cause more severe illness or death. (AP/Andreas Solaro/Pool Photo)

When you think about the mechanics of Sunday Eucharist, it's difficult to imagine a system better designed to spread contagion. Parishioners of all ages are crowded into a confined space, they hug or shake hands, they receive bread on the tongue or in the hand from a minister whose hands are not gloved, they share a cup of wine and they crowd together at the church entrance before and after Mass.

But just as everyone wants to get America back to work, pastors want to reopen churches to their congregations as soon as possible. But public health experts tell us that the country is not ready.

Before people can safely congregate in churches, movie theaters, bars, sports events and other crowded places, Americans will need to be vaccinated against the coronavirus. Even the most optimistic guesses put a vaccine 12 to 18 months away.

Some believe that the country could be gradually reopened if it had a rigorous program of testing, contact tracing followed by isolating those who are sick and quarantining those who have been in contact with the sick.

Again, we are nowhere near having that in place. Even if we were, meeting in large crowds would still be discouraged until a vaccine is available.

Opening churches before a vaccine is available will be very risky, especially for the elderly and those with compromised immune systems.

Risky, but possible? Could churches reopen while practicing social distancing during the time prior to a vaccine? It is possible, but it would be a logistical nightmare with rules that would have to be enforced with absolute rigor.

First, the pastor would have to examine the church and calculate how many people it could accommodate while observing 6 feet of social distancing. Each location would have to be marked so congregants would know where to sit.

Parishioners would not have the freedom to choose where to sit. They would be directed to and from their seats by an usher. Each location would have to be sterilized before the next service.

If the church could safely hold 50, that number would be divided into the number of people who come to church on a typical Sunday. Thus, if 500 people normally came, the pastor would have to hold 10 services to accommodate all the parish. These services need not all occur on Sunday. They could be anytime on the weekend or even during the rest of the week.

Next, the parishioners would have to be organized so that everyone knows which service they should attend. Tickets might be needed to deter gate-crashers.

The space around the entrance to the church would also need to be marked at 6-foot intervals so that people did not crowd the door and break social distance. No lingering would be allowed in front of the church or in the parking lot.

All these rules would have to be enforced strictly. Anyone breaking the rules would be banned from future services. Safety will require that the congregation take orders like parochial school children used to take orders from Mother Superior. No questions; no talking back.

Eucharistic services will face special problems. At the last public Mass I celebrated, I encouraged the congregation to receive in the hand and told them that if I accidentally touched someone's tongue, I would have to stop until I sterilized my fingers. No one received on the tongue.

One solution would be using gloves to put an unconsecrated host at every location in the church where a congregant would sit. The priest would make the intention of consecrating all the hosts in the church, which would then be consumed by the congregation at Communion. Another advantage of this approach would be to eliminate the Communion line, where keeping social distance would be a problem.

At least in theory, churches could be reopened if they observed such strict protocols, but humans, even churchgoers, are not good at following rules. Someone would have to scrupulously enforce the rules with great severity.

At least in this regard, liberals who believe that the pandemic will lead to a less clerical, less authoritarian church are mistaken. Absolute obedience will be required if the congregation is to be protected from infection. There is no such thing as a minor infraction. Not only the recalcitrant but also the inattentive and sloppy will have to be banned from church. Will people be willing to attend such a church?

On the other hand, given the age and low number of priests in the Catholic Church, it will be impossible for priests to do all the services required by social distancing. Most services will have to be led by laypersons, most of whom will be women. These Communion services will use hosts consecrated earlier at Masses celebrated by priests.

At the Amazon synod last year, there was much talk about a lack of priests and the leadership role of women in local communities. In the pandemic, American Catholics are experiencing the Eucharistic famine that much of the rest of the world has known for generations. The pandemic may make the U.S. church more sympathetic to the changes desired by the Amazonian church, and allow women to share their gifts with the church in a way previously not seen in the States.