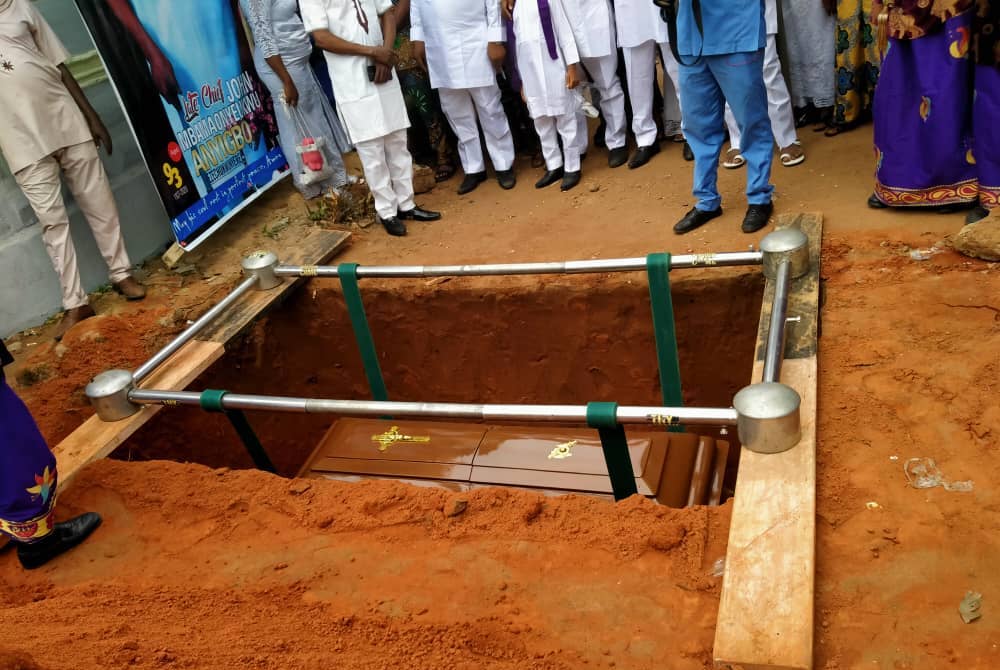 Paschal Anyibgo's family surrounds the casket of their patriarch, John, during his interment. (Provided photo)

When Paschal Anyibgo's father, John, passed away in November 2019, his family was devastated. John was 93 when he died after a protracted illness and was loved by his family and community.

Before the funeral of their patriarch, Paschal's family was not only thinking about the vacuum John had left, but also how to face the financial demands for burying the dead from their local parish, St. Benedict, located in Uli, a rustic village in Nigeria's southeastern Anambra state.

"When my family went … to the parish, they said he was owing 86,000 naira (US$200) and that the money must be paid before he is buried," said Anyibgo. "I was surprised because my father was not owing, and I asked how the debt came about, and they started showing me details, telling me that some projects are going on in the church and some dues are required to complete them."

When Paschal Anyibgo's family contributed around 50,000 naira ($132), they paid so the funeral plans would proceed. But the parish insisted that the complete debt had to be cleared before a priest would be assigned to come and pray for their dead. On the vigil before the burial, Anyibgo had to make the remaining payment of 36,000 naira ($95) so the priest would come the next day and celebrate the funeral Mass for his father.

Anyibgo's case is not isolated. In Nigeria, especially in the southeastern region, the Catholic Church can deny funeral rites over unpaid dues or levies. When someone dies and is to be buried, a clearance certificate that testifies that the person and his or her relatives are not in debt to parish groups (such as men's or women's groups), is often requested before a priest will come and celebrate the Mass.

This clearance certificate has been generating controversy for many years. Families of the bereaved are not only going through the pain of losing a loved one, but also the financial demands of a parish that insists the clearance certificate must be up to date — showing that the dead person was active and financially committed to any groups they belonged to, and that there are no outstanding dues.

While studying at the university, Anyibgo, 35, was the head of the youth group at his parish for three years. His mother, Sabina, was once the vice-president of the women's group and lived up to her financial obligations.

Anyibgo says he was surprised with the financial demands. He told NCR that because of this practice, many Catholics who have lost their loved ones have had to call pastors from other churches, mostly Pentecostal denominations, to pray for their dead.

"I am not happy with this practice because they know that not everyone has the money to pay, especially at that difficult time," said Anyibgo. "During burial, most people are not crying for the dead but for the financial pressure that comes with it, including this clearance." 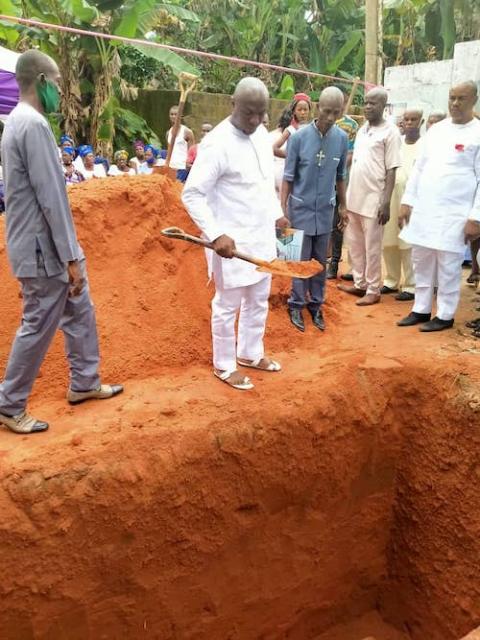 Paschal Anyibgo pours red earth in the grave as a mark of respect and final farewell to his father. (Provided photo)

Margaret Ifediba and her family lost interest in the Catholic faith after the funeral of their brother, Chidiebere, in 2017. When he died, his parish, St. John's in the Lagos Archdiocese, refused to bury him because he did not belong to a zone — a local group in the church that Catholics are expected to belong to as a way of identifying one another, sharing bonds and praying together.

Depending on the region and parish, membership cards for belonging to a zone can sell for 100 naira to 200 naira (about $0.55).

"We went to the priest in the parish and told him about coming to pray for [Chidiebere] during the burial," Ifediba told NCR. She said the priest told her that Chidiebere did not have a membership card for the zone, indicating payment.

When the parish did not send any priest or representative, Ifediba's family and relatives gathered together and prayed privately for the repose of their loved one.

"We had to change the initial date and inform our invited guests about it and they were all surprised," she said. "This was the last respect that should have been given to my brother in death, but they denied us this."

Of the practice of paying for burials, Ifediba said: "This thing is hurting so many people, and I know some [Catholics] that decided they won't go to church again because of this. I did not believe it would happen to us because of the way we were committed to the church. We were surprised this could be done to the dead."

Nnenna Ifeanyi's dad, Pius, passed away in July 2020 at age 70. When he was alive, Pius always paid his dues and did not owe anything at St. Peter Claver's, the local parish in his village.

But when he died, the parish claimed he owed some debts that needed to be paid off before a priest would come and say the interment prayers for him.

"I was angry and went to confront the priest to tell him that my dad has been a good member of the parish and has been contributing his best to projects for over 30 years, even before I was born," Ifeanyi said.

After they paid off the debts, the priest came to pray for the dead. Ifeanyi said her family gave the priest and catechist each 1,000 naira ($2.80) as parting gifts.

"The financial burden was too much, and we spent a lot," said Ifeanyi. "I spent all my savings on the burial."

Ifeanyi told NCR she never thought of leaving the church because of the situation.

"But I was angry about it, and it is often a big burden to people who don't have money," she said. "I know my friend who called a Pentecostal pastor to bury their dad because of this."

Priests and dioceses are divided on the matter of payments for burials. In some dioceses, especially in cities, the practice of insisting bereaved families pay off debts of their loved ones is gradually phasing out and parishes are becoming less strict on the rules. But in rural areas, the practice carries on.

"Some parishioners do not participate in or contribute to what is happening in their home parishes," said Fr. Donatus Ajibo, a priest of Nsukka Diocese in the southeast. "That is why when they are dead and brought home, the home parish requests for clearance before they can be buried."

"The priests say it is only when they are dead that they are brought home for burial and expect those at home to bury them even when they don't contribute to the church," said Ajibo.

In Ajibo's diocese, the practice generated problems. Many parishioners opposed it. When a new bishop, Godfrey Igwebuike Onah, was named in 2013, he stopped the practice. He said burying a Catholic is a corporal work of mercy and every baptized Christian has a right to burial.

Ajibo said most priests are finding it difficult to adhere to the instructions of the bishop, but have no choice than to work with the directives. 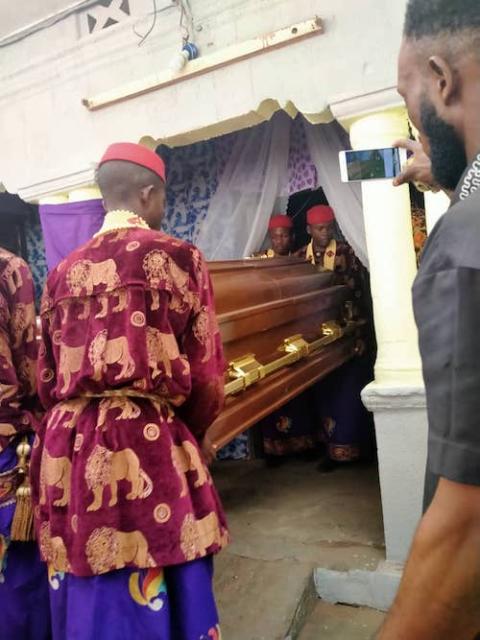 Pallbearers carry the coffin of John Anyibgo during his funeral. (Provided photo)

"It has been a big challenge around us here that the dead are asked to pay not only for the dead but other members of the family," said Awka Bishop Paulinus Ezeokafor, whose diocese is in Nigeria's southeast.

"It adds to the pains of the family, the demands are so much here such that when a man dies, the wife and children will be levied and … we have been trying to end it," said Ezeokafor.

Ezeokafor has issued a directive to priests and parishes to go ahead and celebrate Mass at funerals even when the dead had some unpaid debts to his parish. However, he said asking families of the dead to pay off debts of their loved ones should not be cancelled completely.

"I insist that people settle whatever commitments or dues they are owing when they are alive and not when they are dead; it now becomes a challenge to the ones they left behind," said the bishop.

Fr. Martin Anusi, the director of communications at Awka Diocese, said that the practice of paying for burials is not the policy of the wider church and varies from one parish or diocese to another.

"Sometimes people will just gather in a parish council and make some of these rules, and it came to a point that our leadership began taking that seriously and reminded priests that no priest is a law giver," said Anusi. "The only person who issues directives is the bishop and not the priest."

In addition to the practice of paying for burials, another issue that burdens families is the cost of funerals.

Ezeokafor said he has been pushing for people to reduce the cost of funerals in his region of Nigeria.

"When people are alive, they are not taken care of but when they are dead, the funeral will be so arranged and takes too much resources from people," the bishop said.

In 2019, Nigeria's Anambra state passed a law to try and reduce the costs of organizing funerals.

Ezeokafor and other community leaders were invited to participate during a public debate on the different aspects of the law and have handed out hundreds of copies of the bill to parishioners, so they can read and understand what the law says about expensive funerals.

About a dozen local Catholics who spoke to NCR shared experience with the practice, and they said it discourages people from going to church and adds pressure on bereaved families.