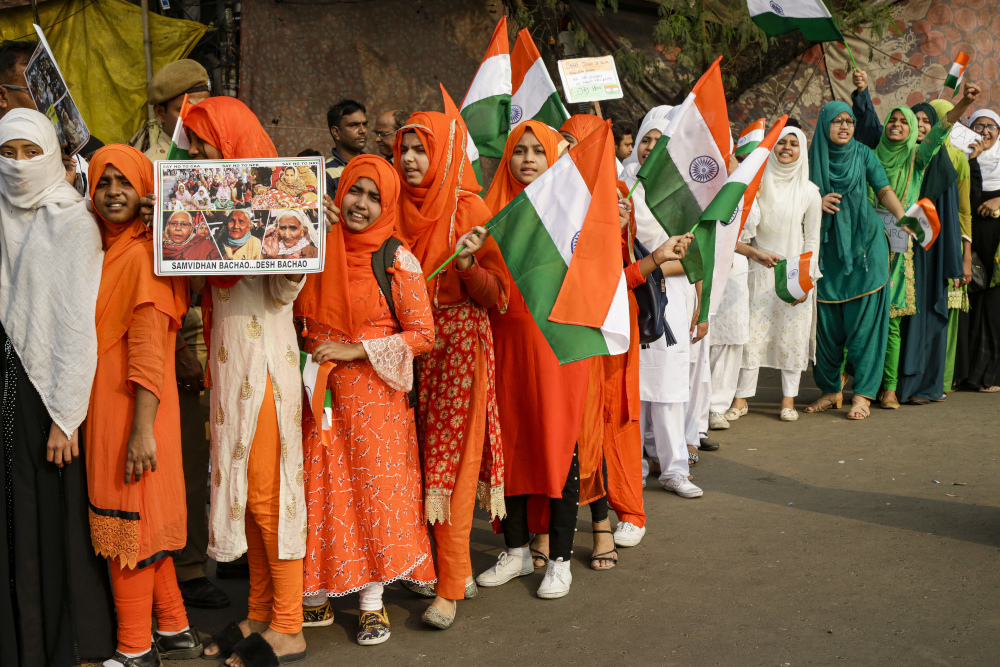 In December, after watching on YouTube as Indian police fired tear gas at student protesters at Jamia Islamia University in New Delhi, Bilal Hussain* immediately tried to get hold of his niece, a student there. She told him she had been studying in the library when police stormed the room with tear gas, barricading students inside as they scrambled for cover.

Learning that violence was also flaring in Muzaffarnager, in the northern state of Uttar Pradesh, Hussain tried to reach relatives there by phone and Facebook Messenger. They live in a Muslim enclave where police are alleged to have detained and tortured Muslim children and raided Muslim homes while chanting Hindu nationalist slogans and Islamophobic slurs. Hussain was frightened for their lives. With internet and phone lines in the area, it took days before he could reach them.

From his home in Southern California, Hussain, 36, felt a disquiet he has known since he was a child. Born in Chicago, where India's religious divides are often replicated in the South Asian diaspora in the U.S., he grew up conscious of violence and bigotry, both in India and at home.

"It's time that we hold the local community accountable," he said.

Last month, Hussain helped lead protests to do just that. South Asian Americans were set to demonstrate in Indian districts throughout the U.S. — from Pioneer Boulevard in Artesia, California, near Los Angeles, to Newark Avenue in Jersey City, New Jersey — against India's Citizenship Amendment Act.

The law, an initiative of Indian Prime Minister Narendra Modi's Hindu nationalist Bharatiya Janata Party, fast-tracks citizenship for refugees of all major South Asian faiths from Pakistan, Afghanistan and Bangladesh who have been in India since before 2015 — all faiths, that is, except Muslims. Opponents call it a religion test for migrants hoping for naturalization. 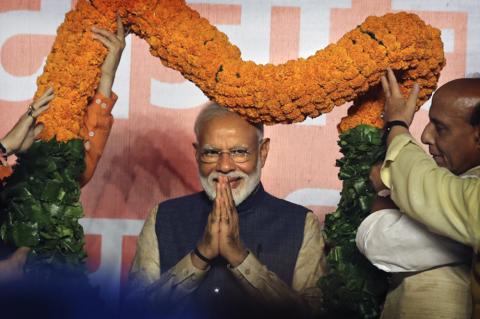 Coupled with a register to identify and deport undocumented immigrants in India's northeastern state of Assam — where Muslims who have been left off the list face the risk of statelessness and being sent to detention camps — critics argue the citizenship act is yet another step at marginalizing India's Muslim community.

But the aim of those protests, which organizers called a "National Day of Action," is less to call out the Indian government itself than to challenge the slice of the Indian and Indian American community in the U.S. sympathetic to India's right-wing politics.

"This protest is about the diaspora drawing a line in the sand," said Thenmozhi Soundararajan, executive director of Equality Labs, a South Asian American social justice organization. Charging that a "vocal minority" has been "supporting genocide and fascism," Soundararajan vowed: "We are not going to be complicit as a whole."

A significant proportion of U.S. Indians come from upper-caste Hindu communities whose politics generally align with Modi and the BJP. Many generate funds for Indian political causes, though the extent and influence are difficult to prove because of the myriad of covert and informal ways they can donate money.

The U.S. State Department once refused Modi a visa for his failure to stop a pogrom in Gujarat state in 2002 that killed more than 1,000 people, mostly Muslims, when he was chief minister. But his supporters pushed for a repeal of his visa ban.

During India's 2019 election, in which Modi won a second term as prime minister, Indians living in the U.S. made more than a million calls to India, according to the Overseas Friends of the BJP, the BJP's international wing. They sent campaign messages in more than 100 WhatsApp groups and recorded hundreds of videos boasting their support for Modi at iconic American landmarks such as the Golden Gate Bridge. Some traveled to India to campaign for Modi in local constituencies and, if they had maintained Indian citizenship, to vote themselves. 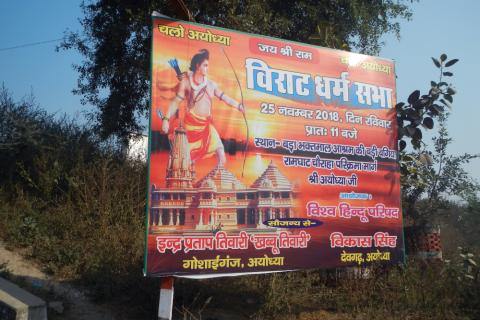 A political banner reads "Hindus want Ram temple built before any government is formed in India" in Ayodhya, India, on Nov. 25, 2018. (RNS/Priyadarshini Sen)

But the support for Hindu right-wing politics — in India and the United States — started well before Modi's election.

In the 1980s and 1990s, Hindus in the U.S. raised funds for the movement to construct a Hindu temple where a mosque already stood on the contested site of Ayodhya — land that Modi awarded to Hindus this year, fulfilling a campaign promise.

Hussain remembers witnessing a man raising money for the temple at an Indian grocery store on Devon Avenue in Chicago when he was about 8 years old, a year before a Hindu mob tore the mosque down in 1992 "My parents walked out," he said, recalling the fundraiser's anti-Muslim rhetoric. "It was traumatic for my parents to listen to that."

Since the controversy has erupted over the citizenship law, some nationalist groups have spearheaded so-called counterprotests in New York, Chicago, Atlanta and Milpitas, California.

Last month, Hindu American Foundation also organized candlelight vigils in several major U.S. cities to commemorate the 30th anniversary of the exodus of the Pandits, a Hindu population that left Kashmir after being targeted by militants.

The law has support "across social media, across temples and secular community gatherings involving both first generation and second generation," said Utsav Chakrabarti, a volunteer with the Vishwa Hindu Parishad of America, also known as the World Hindu Council. The VHPA is the American equivalent of India's Vishwa Hindu Parishad, a Hindu nationalist organization the CIA has classified as a religious militant organization.

In the U.S., it's a registered nonprofit that connects Hindus with their culture through heritage days, festivals and summer camps. It also organizes an annual conference, the Hindu Mandir Executives' Conference, that more than 200 temples in the U.S. take part in, according to Chakrabarti.

He likened the experience of Hindus in the U.S. to Jewish supporters of Israel. "Many times, the Jewish American community gets targeted because Israel as a country has a certain geopolitical position."

He said the news coming from India places Hindus in a bad light and puts them at risk. "There is a lot of concern about what that kind of misinformation could lead to in terms of hate crimes in America," Chakrabarti said.

As examples of what he considers to be such misinformation, Chakrabarti pointed to opinion pieces in Western media, many of which were written by Muslims aghast at what is happening to their community, that Chakrabarti said blew events in India out of proportion. 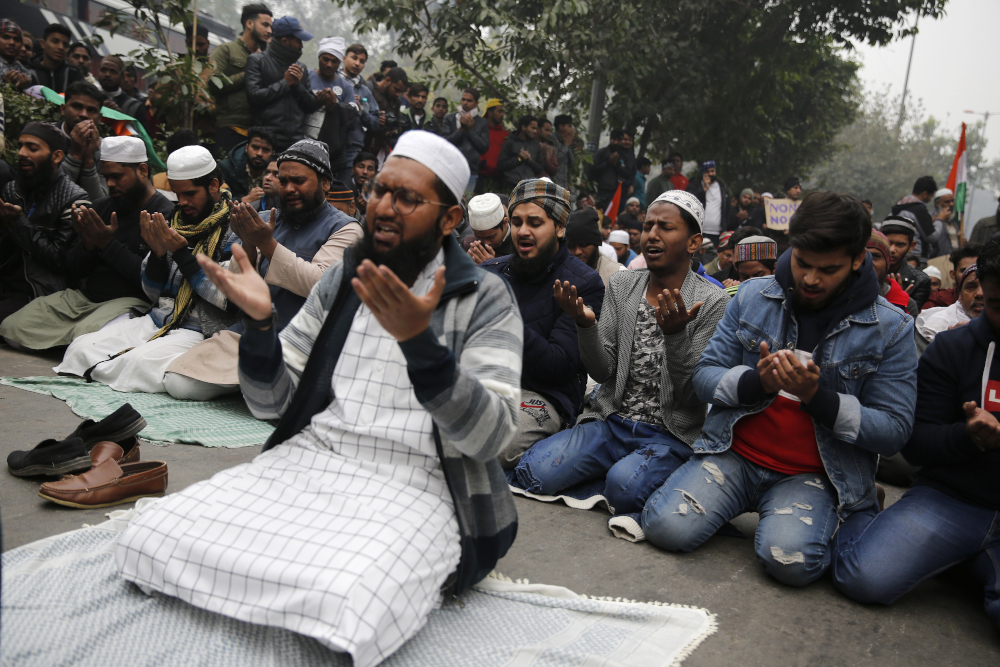 Others argue this fear is specious and that allegations of "Hinduphobia" and "anti-Hindu bias" in the wake of recent politics in India are attempts to sway the conversation away from the nationalists' agenda.

"For me, it's very disingenuous language," said Sangay Mishra, author of Desis Divided, a book on the politics of South Asians in the U.S. "I would not say Hindus cannot be marginalized in any context, but what's happening in India right now is a Hindu supremacist politics, a Hindu domination project where minorities are at the receiving end."

Mishra rejects talk of "persecuted religious minorities" to justify the act's preference for "Indic" faiths — Hinduism, Sikhism, Jainism and Buddhism. While those communities do face oppression, "the whole idea of victimization is being deployed to victimize other minorities," he said.

If the law were truly about offering refuge, critics also argue, it would have included Muslim minorities such as Ahmadis and Shiites, who also face persecution in neighboring countries.

Informing the current debate are memories of Partition, when Pakistan broke away from India shortly after independence from Britain in 1947, giving rise to violent clashes and displacing millions. Some Indians assert that the new citizenship law only satisfies what Partition was meant to do: to create a homeland in India for Hindus just as Pakistan was created for Muslims. 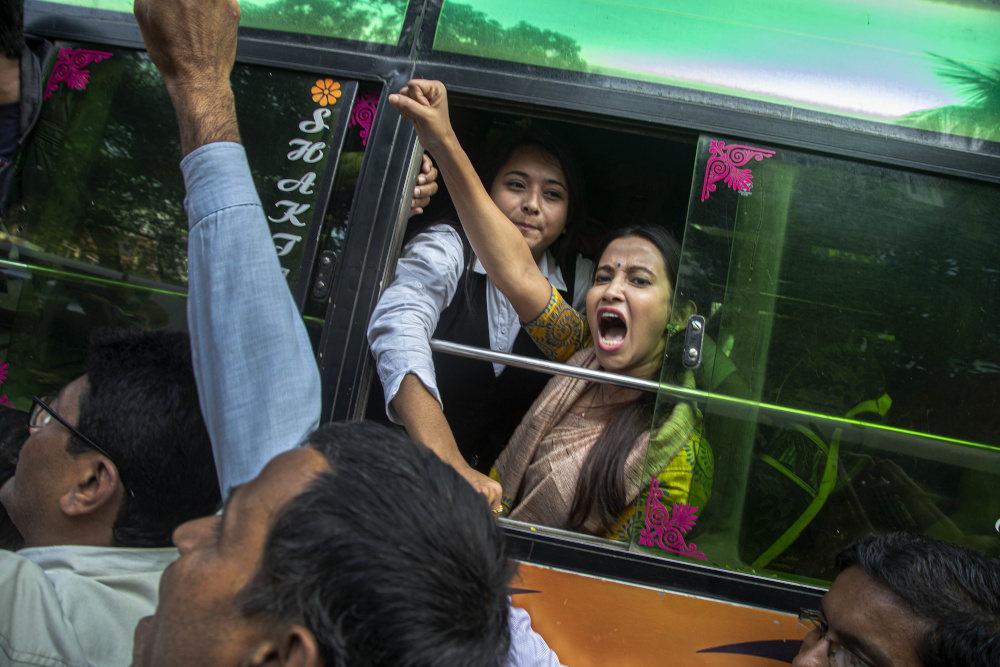 A woman shouts slogans from inside a bus after being detained during a protest against the Citizenship Amendment Act in Gauhati, India, Dec. 17, 2019. (AP/Anupam Nath)

Other voices, however, reject this rationale, which they say only exploits the original trauma. Shelly Anand, a lawyer in Atlanta, has long been involved in U.S. politics and social justice movements, but the National Day of Action is the first time she will protest on an issue related to her heritage. Her parents, Hindus from Punjab, were born in refugee camps in India after Partition.

The fighting and aftermath influenced who her family felt they could trust: Many of her male relatives, including her father, joined the RSS, India's Hindu nationalist paramilitary. The RSS had trained Hindus to defend themselves against mob violence and helped them flee to India during Partition.

While respecting what her family endured, Anand is focused on creating a new understanding for her generation, one that syncs with her values. She rejects any law, anywhere, that would discriminate on the basis of religion.

"We've all kind of experienced the borders crossing over our families, or our families having to cross over newly created borders," Anand said. "There was a lot of pain, but being two generations removed … I know specifically it happened on all sides because I have Muslim and Sikh friends who went through this. Their families went through the same thing.

"I didn't live my parents' experience, but I can decide how do we move forward," she said.

*Hussain is Bilal's middle name. He has requested to not use his actual last name for fear it may jeopardize his ability to travel to India.