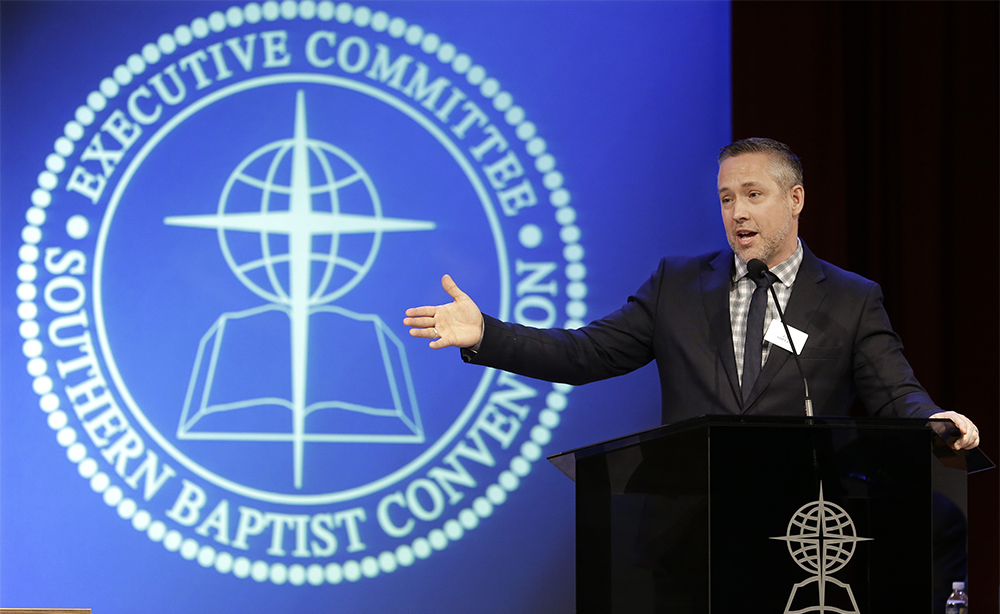 A new Southern Baptist Convention report on sex abuse, filled with the voices of survivors, acknowledges numerous ways the denomination has failed to protect members of its churches.

The "Caring Well" report also summarizes a range of next steps to address the issue, including educating congregations about abuse, preparing them to help survivors and fostering abuse prevention.

"We lament the fact that it took a national movement of reckoning for abuse to force us to take this issue seriously in our own convention," reads the 52-page report, which followed an investigation published May 31 in the Houston Chronicle detailing accusations involving dozens of Southern Baptists.

"It should now be obvious that the problem has been and still is more widespread than anyone has realized," the convention's report said, "affecting our congregations all over the country, from the smallest church pastored by a bivocational minister to the megachurch with hundreds on staff."

The issue has also affected seminaries, agencies and missions boards, the report said, adding, "all too often, it has not been handled justly."

The report, to be presented during the Southern Baptists' annual meeting next week, is the result of almost a year's work by a Sexual Abuse Advisory Group commissioned by Southern Baptist Convention President J.D. Greear. It is based on an inquiry involving "hundreds" of sex abuse survivors, church leaders and national experts.

The first clergy abuse survivor quoted in the report used the word "epidemic" to describe the extent of sexual abuse in the nation's largest Protestant denomination.

"The cause of sexual abuse in the SBC is rooted in our culture of casual indifference to predatory sexual behavior," says Susan Codone, who said she was abused by her youth minister and by her pastor who fired him and then continued the abuse.

"Worn like a shield, indifference results in the catch-and-release practice of catching predatory staff members in the act and releasing them to move freely among other churches and organizations and harm others," Condone said.

While Condone chose to be identified, some of the other survivors had their names changed or were cited anonymously.

The report repeatedly refers to sexual abuse as "evil," and calls the "meager efforts" outlined in the report only the beginning of what is hoped will be a "movement of healing and reform."

The report said that the term "clergy abuse" does not apply solely to misconduct involving children.

"Clergy abuse not only encompasses abuse to children, but also a 'consensual' adult sexual relationship between a clergy member and a congregant," it said. "The power and spiritual influence that a member of the clergy wields over their congregants essentially renders consent impossible."

Codone said in the report that the pastor who abused her also had an inappropriate relationship with her Sunday school teacher.

Among the numerous failures named in the report were inadequately training staff and volunteers, declining to report suspected perpetrators to law enforcement and instead recommending them to new employers, and improperly citing church autonomy to avoid acting appropriately.

It noted that a new study by LifeWay Research about abuse in the church found that just half of Protestant churchgoers want victims to be protected when abuse is discovered. The report called that finding and others — including that just 63 percent of respondents wanted the truth about sexual abuse to be made public " — a major cause for concern."

The report lists ways churches can respond to abuse, including developing a team of caregivers to assist survivors who disclose abuse and checking references before hiring staffers and volunteers.

It also recommends a new free video series called "Becoming a Church that Cares Well," which features experts sharing best practices concerning a range of scenarios in a church, ministry or school.

The report concludes by asking Southern Baptist churches to take an eight-step "Caring Well Challenge" over the next year to help them "be safe for survivors and safe from abuse."

The document follows other actions by Greear and fellow Southern Baptist Convention executives since the last convention meeting.

In February, Greear said the convention's Executive Committee should investigate 10 churches named in a report by Texas newspapers that found 380 current and former Southern Baptist ministers and volunteers had been accused of sexually abusing more than 700 victims in the past 20 years.

An Executive Committee workgroup responded less than two weeks later by saying just three out of the 10 merited investigation.

More recently, Southern Baptist Convention leaders have considered setting up an official "Credentials Committee" that would review complaints about how member churches handle abuse allegations. If it is approved by the Executive Committee, Baptists would vote on the proposal during their June 11-12 meeting in Birmingham, Ala.