by Soli Salgado
Spirituality
This article appears in the Francis in Colombia feature series. View the full series. 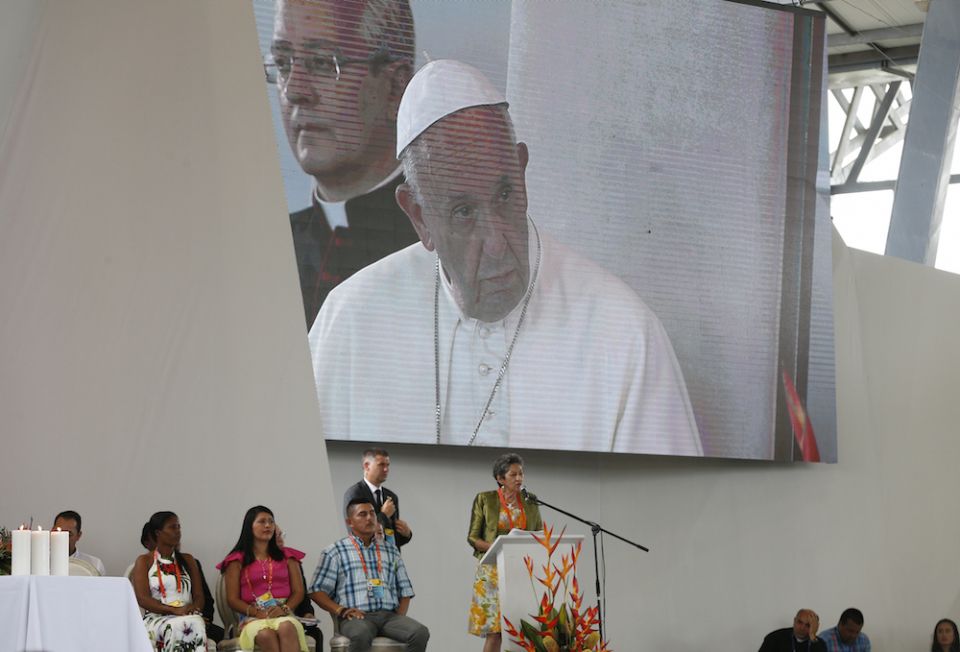 VILLAVICENCIO, COLOMBIA — The city itself seems like one that most prominent figures would overlook: shabby but not run down, colorful but not picturesque. Standing outside the cathedral before a large square, one might have to ask if this is, in fact, downtown. (It is.)

Villavicencio, a city 75 miles southeast of Bogotá, is home to roughly half a million people, and on Friday, Sept. 8 the city was host to Pope Francis. This stop comes between his visits to Bogotá and Medellín, with Cartagena as his final destination Sept. 10.

In a large field about 20 minutes outside the city center, Francis celebrated Mass before 650,000 people (roughly 150,000 more than was anticipated), according to one official who helped organize the events.

Some had camped out overnight to see Francis, trickling in since midnight the night before. Others were left on the curb outside the park gates, too late to see the pope in person, but too hopeful to abandon the scene, thinking they might catch a glimpse as he leaves.

"It's amazing; it's like we have God's representative here with us," said one woman who arrived too late to be let in, but stayed at the campsite with her young kids anyway.

"This city has been so torn with violence and divided over the years, and I know that's why he chose to come here. It's comforting that someone like him recognizes that struggle and chooses to pay attention to us."

Between two large, fenced-in campgrounds ran a gravel road lined with vendors, selling either papal memorabilia or juices or snacks, yelling their bargains to anyone who walked past on this humid day.

One man on the side of the road was helping his 3-year-old daughter tie her shoe, and when asked what keeps him here, he said, "It's a chance to make some extra money," nodding at his cooler filled with water bottles.

"I may be here to sell what I can, but it's still a nice opportunity to do so in the presence of the pope." 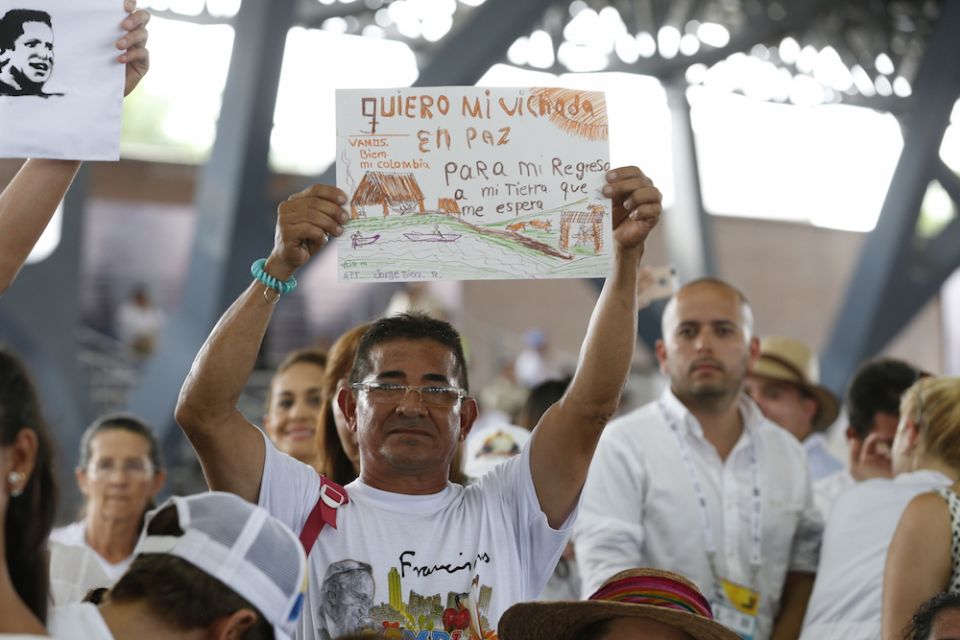 Regardless of whether or not people could attend the papal Mass, he said, the fact of the pope's arrival has caused a unifying, friendly spirit around the city.

One woman who attended the papal Mass said that it felt like she was "inside Jesus' heart."

Another man who was unable to attend Mass, but was inside Las Malocas Park, managed to see Francis cruise through in his pope mobile. "Even though I couldn't be at the Mass, to see him in the pope mobile gave me a spiritual peacefulness. It's amazing to see believers and nonbelievers be so moved by an earthly man."

Later that day, Francis led a reconciliation ceremony, where he honored victims of the 50-year civil war. The armed conflict between the government and guerrilla rebels has claimed 220,000 lives since the 1960s, with Villavicencio as the scene of some of its worst violence.

One of the 6,000 attending the ceremony was Milena Cardenales. She was 6 years old when her mother disappeared in the 1985 Palace of Justice siege, in which the rebel group Movement M-19 occupied Colombia's Supreme Court, located in Bogotá.

At least 30 guerrillas stormed the palace and took 300 hostages. The government responded with an assault that killed at least 100 people, including half the court. Several people disappeared after the siege — mostly cafeteria workers. Cardenales' mom was one of those cafeteria workers, leaving her and her five-year-old brother behind for her grandfather to raise.

On Oct/ 20, 2015, the government called her to let her know that they had found her mother, informing Cardenales that she died on the fourth floor of the building.

"This has reestablished some lost dignity, but we still lack truth," she told NCR. "We continue that search. The physical search has ended, since they found her remains, but now we search for justice."

Cardenales told NCR that it brings her joy to know the pope found a space to be with the victims, saying that, while they can't all attend, those who are there represent the thousands of victims throughout the country.

"For the pope to call for reconciliation fills us with hope that Colombia will hear his message and do what it should've done a long time ago, and that is to work for peace," she said.

"His meeting with us should reaffirm to everyone else in this country that this is what we want, as victims of the conflict. I hope that tells the rest of the country that this is the right thing to do, that they unite with us — those who have been directly affected by this and who have lost our loved ones, our own flesh and blood."

The day before in Bogotá, Sept. 7, Pope Francis asked Colombian political leaders to maintain the peace deal, despite its unpopularity with half the population. Indeed, he told journalists on the papal plane from Rome that the trip was meant to encourage a path toward peace.

In Villavicencio, one cab driver said that, through his conversations with passengers and hearing what they say to each other, he can tell there is "certainly far less division" over the peace deal, although setting aside their mistrust of what they believe to be a corrupt government, he said, has been difficult.

"I think the pope's support of the negotiations and him coming here to say so has helped. That's something you can feel."

"We'd be letting the delinquents off easy," he said of the pact, adding that he believes it to be as divisive an issue as ever.

One street vendor outside the papal Mass said he thought the pope's visit could be influential toward public opinion, but, echoing the cab driver, said it has to trump the perceived dishonesty within the government.

"The pope's stance is of course highly respected, and may influence some people, but the corruption in the government is what's hard to get past," he said.

"Maybe the pope is right, and maybe this is what we need. The fact that he came all this way to say so is definitely a statement, but it just has to be stronger than the people's distrust of the government to handle this. I see those as the two sides."

After shooting, Catholics in north Minneapolis hope to pave path to peace

Villanova gathering celebrates the memory of Daniel Berrigan, 'patron saint of the nay-sayers'