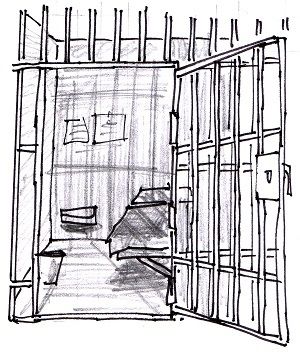 The Israelites, under the leadership of Joshua, used the Ark of the Covenant as a sacred totem to stop the flow of the Jordan River when they crossed to claim Canaan as their promised land. They were also reenacting the parting of the Red Sea during the Exodus, the moment of liberation by God.  It was their baptism of freedom, passage to new life.  John the Baptist used the symbolism to cleanse people from sin but also as an evocation of the Exodus.  Herod and the Romans would have ignored the crowds flocking to John to be baptized except for this incitement to rebellion.

The Christian use of baptism is likewise loaded with the same promise of breaking free of slavery to claim a new life with Christ.  John’s baptism of water became Jesus’ baptism of fire and the Holy Spirit. The church added baptism of blood for martyrdom and baptism of desire for anonymous converts.  And perhaps we could add another form-- a baptism of tears when giving and receiving forgiveness. It may be the most difficult baptism of all.  Peter had to travel this trail of tears after his denial of Jesus. Only then could he grasp the meaning of divine Mercy he would  preach because he had experienced it.

Forgiveness is hard. Public figures stop short of admitting their guilt when asking to be forgiven for sexual harassment. Bishops beg forgiveness for clergy abuse without opening the door to liability beyond the statute of limitations.  Those who have the power to forgive require a pound of flesh, financial reparation and perpetual disgrace rather than seek reconciliation.

Jesus’ parable of the hard-hearted steward was his master class on why we should forgive one another. It is because God had already forgiven us unconditionally, mercy beyond measure, unearned love and rescue from death, as a pure gift.  We are the million-dollar debtors let off the hook, the reason we should not drill down on one another for small unpaid loans. Be merciful as your heavenly Father is merciful.  This is freedom from pettiness and pride, the narrow heart that impoverishes your chance to be as good and generous as God.

The Our Father makes forgiveness the swing vote from death to life, soul starvation to bounty, from quid pro quo to noblesse oblige. Why be a miser when God offers extravagant and unconditional love for the asking, a daily baptism of joy and open passage to the Promised Land?

We bind ourselves to the One who, in the binding, sets us free