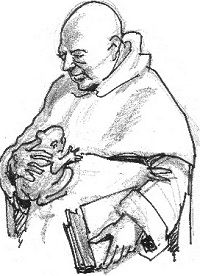 Commemoration of Saint Albert the Great, doctor of the church

Luke’s story of the healing of a blind man on the road to Jericho presents us with the first prayer on the way to faith: “Lord, I want to see.”  Without physical sight a person lives in darkness. Without insight, the mind is lost. Without faith, we lack the light that reveals reality, the whole perspective that enables us to see the interrelationships and order in creation.

Today the church remembers Saint Albert the Great (1200-1280), the brilliant 13th century Dominican who was the first in Europe to study Aristotle, whose logic and methodology opened the West to both science and Muslim use of mathematics and philosophy to study reality. Scholars formerly bound to church authority and biblical texts discovered the power of reason to explain the world, literally opening their eyes to new knowledge.  Albert was confident that faith and reason pursued the same objective truth, grounded in the Incarnation, God revealed in the person of Jesus Christ.  The simplest affirmation of the mystery of the Incarnation is the world itself. The Creator is in the creation. The world is the Book of God, waiting to be opened and read.

We commemorate a great scholar and scientist today in a world that seems to have abandoned objective, verifiable truth for personal perspectives based on ideology and political preference. Mass commitment to groupthink based on my personal freedom to believe and do whatever I decide about public health policy has prolonged a dangerous pandemic and paralyzed efforts to respond to the global climate crisis.

It is hard to imagine the reaction of 13th century scholars emerging from the shadows of superstition and magical thinking during the Dark Ages, when plagues ran rampant for lack of simple hygiene and natural disasters were blamed on witches.  It would take centuries before eyes were opened to truths available with simple observation and an understanding of cause and effect that gave the world modern health care and technological advances that have saved millions of lives.

Faith is enhanced when it seeks understanding, and knowledge finds perspective and purpose when it is open to the questions proposed by faith.  Holiness and human development move along the same trajectory. The pursuit of truth wherever it can be found discovers justice and love as the real basis for human meaning and the importance of the common good to the welfare of all.

The image with this reflection is my sketch of a beautiful statue standing at the entrance of St. Albert the Great Church in Minneapolis. Saint Albert, affectionately known as “Big Al” by Pastor Joe Gillespie and parishioners, holds a large frog and a book. Nature and theology, the world and the Bible, are inseparable.

Mary and the Church

What is the organ that sees the invisible?