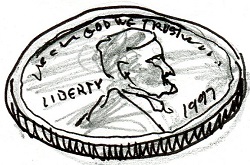 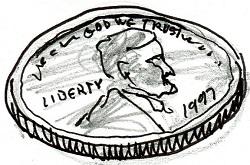 “Heaven and earth are filled with your glory” (Psalm 145).

Today’s gospel about paying the temple tax is similar to another famous story about paying taxes to Caesar (Matt 22:21). The early church was not isolated or disengaged from the world. These two stories show an effort to fulfill worldly obligations while preserving an otherworldly character. Jesus tells Peter to pay the temple tax by catching a fish in whose mouth was a coin, so as "not to offend," though he also notes that because they are “children” of the household, not foreigners, the disciples are not obliged to pay the tax.

The distinction between the church’s transcendent mission and its impact on the world of political, cultural and economic concerns has not always been easy to maintain. Historically, the church has often been a major player in a world of money and power. Pope Francis has used the papal pulpit to criticize aspects of the global economy and the role of nations at war or for supporting economic practices that exploit the poor and destroy the environment. While the church has little secular power, it has a real obligation to uses its spiritual voice to support justice and the common good.

Today’s commemoration of St Dominic (1170-1221) illustrates the complex relationship between the church and the world because the church is in the world, not apart from it and its problems. The mendicant orders like the Dominicans and Franciscans responded to a changing feudal world by sending preachers and gospel witnesses not limited by monastic rules into the cities and universities to help shape a different kind of society.

St. Dominic founded a community of preachers because he saw the need for well-trained communicators in a world facing great changes and conflict. He was moved with compassion for the suffering that resulted from the spread of error and distorted cultural values. We are all in the world, and what we say and do has an effect on the lives of others politically and economically. Let us take up our obligations to others with compassion and our obligations to God with trust and faith.

While the Dominicans were later linked to the Inquisition, Dominic’s original intent appears to have been to avert violent conflict with promoters of dialogue among opposing groups. This is the goal of all diplomatic efforts in a time of war. Words and ideas can bridge differences before conflict leads to war.  We are grateful to have such voices pursuing peace in our world, including that of Pope Francis.