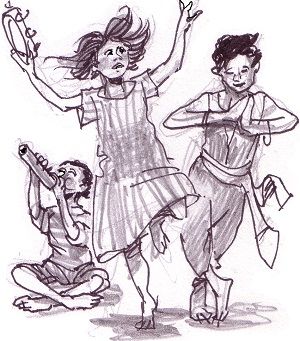 I remember riding on a bus many years ago and pondering a placard that said, “Not to decide is to decide.”  I was in college and trying to make up my mind about lots of issues, including involvement in the antiwar movement.  The message has come back to me often during my life when I had to make other decisions. I could choose or I could remain paralyzed at the prospects of risking one path over another. But procrastinating or staying stuck in neutral was itself a choice.

On a matter of considerably greater import, Jesus chided his contemporaries for refusing to commit one way or the other to God’s invitation to enter the Kingdom.  He compares them to children in the marketplace quarreling over whether to play a happy game or a sad game, a wedding dance or a funeral dirge. They cannot decide, so they go home without playing any game at all.

He compares their indecision to the refusal of his generation to accept either John’s rigorous message of repentance or his own invitation to freely enter the joy of the Kingdom.  They escape John’s challenge by dismissing him as too radical, even possessed by a demon, while also avoiding the risks of discipleship by dismissing Jesus as a glutton and a drunkard.  They avoid both commitments by deciding not to decide. They do nothing, take no risks, but instead choose to remain neutral.

Advent is a time to rouse ourselves to decide to decide.  It is time to deepen the adventure of having been called to life, both now and forever, by embracing Jesus’ invitation to discipleship.   If we postpone or ponder too long, the path forward will fade as we sink back into indecision and the lassitude and passivity that is the comfort zone of the dominant culture, which will decide for us.  The treasure in the field is never uncovered and claimed; the pearl of great price is never sought or purchased. The rich young man goes away sad; the mustard seed is never sown.

The first Christmas went unnoticed for many, while the lowly shepherds came to adore, and the wise men brought gifts to celebrate the birth of God in the world.  What will we do?  How will we prepare for so great a gift? And when it appears, will we embrace it and make it our own?

Pat is the former editor of our sister publication, Celebration, and he also served as NCR cartoonist. After retirement in 2016, Pat continues to contribute to NCR with his Francis comic strip and Pencil Preaching. Contact him at pattrickjmarrin@gmail.com.

As the Feast of Our Lady of Guadalupe approaches, the Virgin Mary inspires community