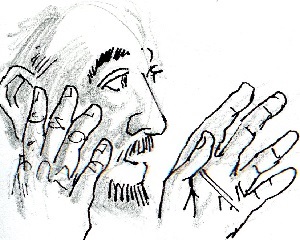 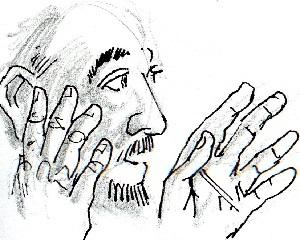 We are reminded by todays Gospel just how many questions Jesus asked during his ministry: “Whom do you seek?”  “Which one of these was neighbor to the man who fell in among robbers?” “Will you not watch one hour with me?”

Jesus’ question in his encounter with the blind man Bartimaeus is clearly addressed to all of us: “What do you want me to do for you?”  Imagine Jesus posing this question to you as you begin to pray.  Knowing he could do anything we asked, what would that be?  Our answer would, of course, reveal everything about us, where we are in our spiritual growth, how well we know ourselves and our greatest need.  What would you ask for and what impact might it have on your life?

Bartimaeus knew what he wanted when he began to cry out for Jesus’ attention. He wanted to see.  Sight would mean he would no longer be a blind beggar on the side of the road. Sight would restore his human dignity. It would free him from his dependence on the charity of others, or from their indifference and feigned pity.

But the story suggests that he also knew what he was most eager to see.  He wanted to see Jesus. The title he uses to cry out, “Son of David,” tells us that Bartimaeus believed Jesus was the promised Messiah, the Christ of God.  Like old Simeon in the temple, Bartimaeus longed to see the Savior of Israel.  When his eyes were opened, the first person he saw was Jesus, and we can only imagine the look of love he received as he gazed up into the face of Jesus.  It was the same irresistible look that Jesus gave to each of his Apostles when he called them.  Leaving behind everything, including his all-essential cloak, Bartimaeus immediately followed Jesus on the way.  Where Jesus was going was critical to the story. He was going to Jerusalem.

This detail adds another dimension to the encounter.  We should be careful what we pray for because we might get it.  What does Bartimaeus see in the company of Jesus? He would have seen the brutality of the crucifixion, the faithlessness of his disciples, the ignorance and cruelty of the world that cheered then rejected Jesus.  With eyes wide open, Bartimaeus would see the fear-driven selfishness and evil he had sensed around him in his blindness, but at an appalling scale and depth.

In one his earliest albums, released almost 60 years ago, a young singer-poet named Bob Dylan offered a litany of the tragedies already visible everywhere with the song, “A Hard Rain’s A-Gonna Fall.”  The lyrics are answers to a question posed by the singer to a wide-eyed and idealistic generation of young people awakened to the world’s injustices.
Oh, what did you see, my blue-eyed son?
Oh, what did you see, my darling young one?

The song (https://www.bobdylan.com/songs/hard-rains-gonna-fall/) is remarkably prescient to the global lamentations anyone with eyes to see today will recognize, enough to make us wish we had not asked to see. We might see more than we can bear. Yet is this not accompaniment with the Christ, the Suffering Servant, the Crucified One?  The eyes he opens also see hope, the power of compassion free of cynicism and despair. To see and follow Jesus wherever he goes also reveals God at work in all things, transforming even sin into grace, suffering into the victory of love.

Bartimaeus invites us to come from the sidelines as bystanders, tourists and voyeurs of other people’s tribulations to join Jesus on the road to Jerusalem. With eyes wide open, we can engage reality as he did, with the look of love and the willingness to share his cross in order to know his rising in glory.