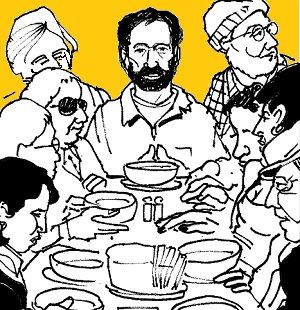 “This is the fast that I wish; releasing those bound unjustly, untying the thongs of the yoke; setting free the oppressed” (Isaiah 58:6).

Jews observe the spiritual disciplines of prayer, almsgiving and fasting. When John’s disciples asked Jesus why his disciples were not fasting, he said it was because they were wedding guests, a legal exemption but also a remarkable claim about his presence and the nuptial joy that was appropriate to the moment.  Why the long faces, penance and mourning while the bridegroom is celebrating God’s marriage to his people?

We envision the wedding feast at Cana, with everyone singing, dancing, feasting and drinking the best wine.  Standing apart are the sober, indignant Pharisees passing judgment on Jesus and his motley friends for their laxity. The disciples of John probably didn't go to weddings in their desert attire and for lack of grooming. We can relate to the fact of fewer Catholic weddings during Lent, when decorating the church may have seemed inappropriate. Think of the wedding photos in a bare sanctuary.

Jesus knew there would plenty of fasting and lamentation when the bridegroom was taken away, for this was how death was observed, and his death was not far off.  Then his disciples would grieve and long for his presence, as the church did after his death on the cross and departure from this world.

The war in Ukraine casts a pall over its people, the world and us as we watch heartbreaking television images of husbands saying goodbye to their wives and children as refugees in surrounding countries and returning to defend their country, knowing there will be far more funerals than weddings in the weeks and months to come.   So Jesus knows that his disciples will endure great suffering in Jerusalem and persecution after that while they await the joy of his return from the grave and then on the clouds to bring both mercy and judgment and the promise of the beloved community.

Why interrupt their joy for now because of those critics who saw religion only as hairshirts and sacrifice to please a demanding God?  Give them a foretaste of the divine wedding feast, the joy of the Gospel and the banquet of the Eucharist as the ultimate victory of grace over sin and death.  This is the meaning of hope in the face of evil, that no matter what happens, God is with us, and love is always stronger than death.

What I found in the labyrinth