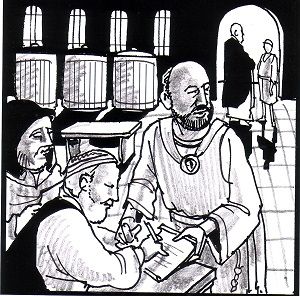 One key to understanding Jesus' parables is to ask to whom the parable was addressed and why. For example, Luke's three parables of mercy in Chapter 15 were addressed to the scribes and Pharisees because they were complaining that Jesus ate with sinners.

Today's Gospel was addressed to Jesus' disciples, who were upset because he was being attacked for being too lenient with sinners. His critics were saying that this took away the incentive for being virtuous.  Isn’t Jesus undermining religion itself by presenting God as forgiving sinners too easily?

The steward in Jesus’ parable has been reported for cooking the books. Caught in the act, he then shows real chutzpah by giving away his master’s property to ensure he will have benefactors when he is dismissed.  He is indeed a very dishonest steward, yet Jesus praises him for being resourceful. One possible interpretation of the parable is that if only religious people were as proactive about their spiritual welfare as this steward was about his worldly welfare, they would advance in God’s favor.

But the parable becomes even more remarkable if we ask if Jesus was actually answering his critics by admitting that he was just like the steward who was squandering his master's property. If God is the rich man, Jesus is the steward who tells sinners to settle quickly on generous terms and walk away debt-free. Jesus was "giving away the store.” Even more outrageous, instead of criticizing him, God was pleased with Jesus for acting as God does, subverting the religion of rules with gracious, unconditional love.

Like another parable that infuriates good people —the parable of the vineyard workers-- the self-righteous will never grasp the nature of a God who holds open the door of mercy to everyone, even if they come late and do less.  Even if we help others by helping ourselves, God will still cut us some slack.  The dishonest steward impressed his master by letting others off the hook, and so the master does the same for him.

There is much to ponder in today's parable. But doesn’t it challenge us to put away our account books, suspend our judgment of others and just give away the store? If we can, we will glimpse the merciful God Jesus preached and begin to grasp why the Gospel is such a scandal to the wise of this world.

Column | Giving away the store