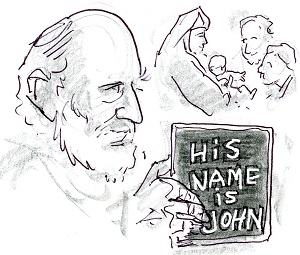 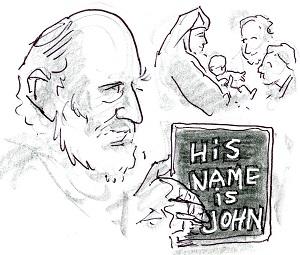 Any child to older parents is conceivably a miracle, a “gift from God.” John, whose name means “God is gracious” was given to Elizabeth and Zechariah, an elderly couple who had kept the law perfectly but were sterile. A baby in the house must have roused the whole extended family and their town to wonder, “What, then, will this child be?”

John lived out his short life as a bridge between the old and new covenants. He preached judgment but ushered in a time of mercy. He was the last great prophet of the dispensation of repentance but pointed to Jesus who announced God’s graciousness to sinners. He was the end of one era and the start of the next, leaping for joy but without his head into the kingdom of God.

We make the same journey, first schooled in the commandments, only later taking up the beatitudes. We are formed by rules that guide and protect us until we learn discretion and mature into love with all its risks and uncertainties.

We move from light and dark into the gray shadows of mixed motive and ambiguity, where wisdom comes from both failure and success, and legal perfection gives way to wholeness of heart that excludes no one. The threshold from law to love may seem like a doorway to freedom, but it is in fact a far more challenging path because we must create it as we go.

John reminds that life holds many baptisms, from water to fire to blood. Each passage is not without suffering and loss, but brings us closer to the mystery of God, whose judgments are always merciful and whose mercy is always just.