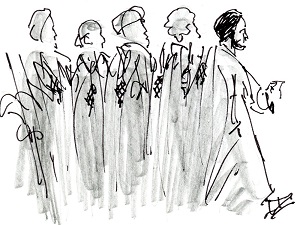 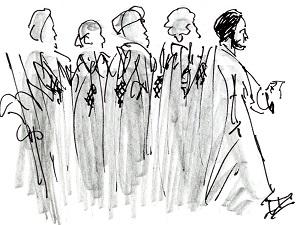 The story of the anointing of David in the Book of Samuel has all the qualities of a popular folktale. Seven of Jesse's sons are considered as potential king. An impressive group, lofty in stature, each one passes before Samuel, but none is the one chosen by God.  But the youngest is not there, and Samuel has him fetched from the hills where he is watching sheep: “He was ruddy, a youth handsome to behold and making a splendid appearance. The LORD said, “There–anoint him, for this is he!”

Thus begins the royal history of David, from the pasture to the throne, a complex figure whose charismatic qualities take hold within the memory and imagination of Israel as prefiguring the Messiah. But he is also a prodigious sinner who will test God’s mercy and end his personal saga in great sorrow and tragedy.

It has been suggested that the story of David was the basis for the “Godfather,” following the fate of the youngest brother, Michael Corleone, who trades his innocence for power to protect the family and fulfills its downward trajectory of violence and bitter division.

Hero or monster, the biblical David builds the house and line from which the savior will be born in Bethlehem. David’s memory is linked to today’s Gospel when Jesus defends his followers for breaking the Sabbath by gleaning heads of grain to eat as they passed through a field.  His defense reminds his critics that David and his hungry soldiers ate the temple bread reserved for the priests.

Jesus’ argument offends even further because it compares him to David, who also broke the law.  The analogy reminds his enemies that at the time of the incident, David was in flight from Saul, who wanted to kill him as a rival to the throne. Thus, Jesus exposes the murderous intent of those in power, for he threatens to undermine the authority of the temple and its priests with his radical message that human need overrides human rules, for “the Sabbath is for man, not man for the Sabbath.”

Jesus is the Son of Man, another name for “human being.” To make his point clear if not provocative, Jesus declares humanity the “Lord of the Sabbath,” upending religion as superior to and controlling human freedom and the right to survive. So many religious rules divide people into haves and have nots or place burdens on them when what they need is help. Today’s Word reminds us that love is the only rule we have to guide us in life’s complex challenges.