A prophetess in our midst 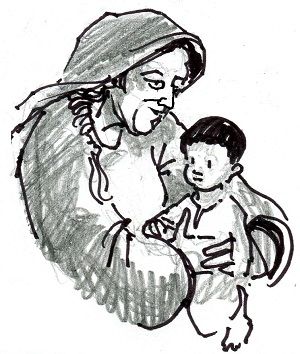 "Anna gave thanks to God and spoke about the child to all who were awaiting the redemption of Jerusalem" (Luke 2:38).

We approach the end of the year with the image of an elderly widow in the Temple who takes the child Jesus in her arms with joy and tells everyone about him. Every parish has such women, often retired widows who act as community elders and wisdom figures. They ordinarily attend an early Mass during the week if it is offered, greeting one another and sharing the needs of family and friends at the Prayers of the Faithful.  Today, with mobility and fractured families making it less and less likely that some children will know their relatives and grandparents intimately, these parish surrogates take on special roles as providers of support for young parents and their children.

So, it is not hard to imagine Joseph and Mary bringing their infant son to the temple. The elders sense that there is something extraordinary about this couple and their child, and they gather around to share what the Spirit is saying in their hearts. “This child is destined to redeem God’s people.” Anna asks to hold the child, and Mary places him in her trembling arms. Tears are running down her face as she looks with wonder into the face of Jesus. The others draw close to touch the child, blessing him and praising God for answering a deep prayer they have been offering every day of their lives.

Widows played an important role in the early church as mentors to younger women and by carrying out charitable works. There is evidence that women were ordained as deaconesses to assist at female baptisms, and St Paul names women who shared his ministry and presided at house churches. This followed naturally from the example of women in the Gospels who traveled with Jesus and were key witnesses to his preaching, his crucifixion and resurrection.  They were in fact the first evangelists to the the men, who had fled in fear. They were present at Pentecost when the Spirit formed the church.

These powerful precedents make it all the more paradoxical that as the church grew into an organization, especially under Constantine, it became more patriarchal and hierarchical, citing Gospel texts to show that Jesus chose 12 men to be his Apostles, seen as the forerunners of bishops who ordained other bishops and priests in a succession of offices that became the basis for today's exclusively male church leadership.

Thus, today we find half the baptized members of the church excluded from leadership based on gender alone. Theological argument aside, the church stands as one of the last holdouts in a world that sees gender equality as a justice issue. This damages the church’s credibility, hurts evangelization and deprives the entire church of women’s service at a time when the male priest shortage is limiting access by the faithful to the sacraments.

Today's Gospel offers the model of a woman recognized as a prophetess. Anna, together with Simeon, welcomed and proclaimed the child Jesus in the temple. Anna represents a significant form of leadership -- that of prophetic ministry free of legal and official structures to simply follow the prompting of the Spirit. Anna also demonstrates that all ministry is essentially about welcoming others to share Jesus.

If the Catholic church wanted to end the calendar year on a note significant enough to be its New Year’s resolution, it could not have chosen a better Gospel. Anna is a full partner to Simeon in welcoming Jesus to redeem God’s people.

Pat is the former editor of our sister publication, Celebration, and he also served as NCR cartoonist. After retirement in 2016, Pat continues to contribute to NCR with his Francis comic strip and Pencil Preaching. Contact him at patrickjmrrin@gmail.com

Column | A prophetess in our midst

The Holy Family of Jesus, Mary and Joseph

Mary's Assumption is our future